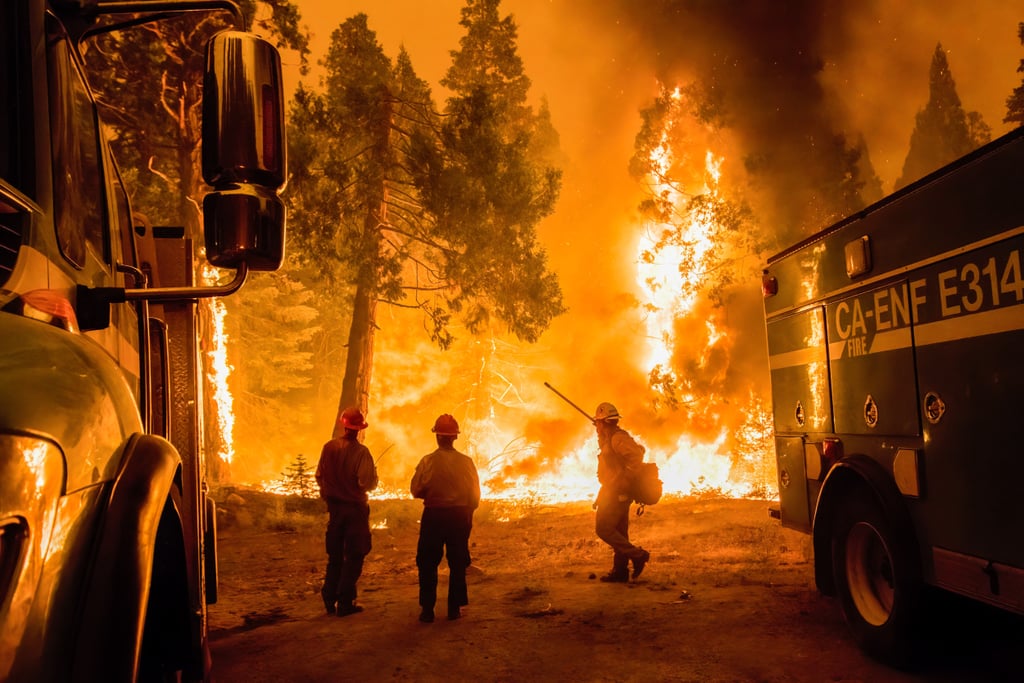 In a matter of weeks, California's wildfire season has managed to destroy nearly 580,000 acres of land, forcing thousands to evacuate as fires continue to rage throughout the state. The Dixie-Fly Fire began burning in Butte and Plumas Counties on July 14, and as of Aug. 31, the blaze — which is about 50-percent contained — has consumed nearly 1,260-square-miles, making it the second largest wildfire in state history.

There's also the Caldor Fire, which began in El Dorado County near Lake Tahoe on Aug. 14, followed shortly thereafter by the French Fire in Kern County on Aug. 17. The Caldor Fire — one of 83 large fires burning across the US and 13 major fires currently ablaze in California — has since covered nearly 300-square-miles of land, destroying multiple homes and resulting in mass evacuations that have put shelters at capacity. Thousands of gallons of water and retardant have since been dumped on the fire, and smoke in the air has reportedly been so thick that air firefighting operations were stalled.

"There is fire activity happening in California that we have never seen before."

Red flag warnings were also issued to the east in Nevada's Douglas County on Aug. 30 after the fire jumped Highway 89, forcing many to prepare for evacuations. The jump resulted in a drop from 19-percent containment to 16-percent containment over the weekend, and seasonal wind gusts are expected to escalate the spread of the flames. "There is fire activity happening in California that we have never seen before. The critical thing for the public to know is evacuate early," said Chief Thom Porter, the Cal Fire director, according to NPR.

Even as 15,000 firefighters put themselves on the front lines to battle the raging flames — including crews from Utah, Washington, Wisconsin, and West Virginia — thousands of residents continue to be displaced from their homes in 2021. If you have the means, consider helping by providing the resources outlined ahead for those in need, and read on to find out what you can do right now to support victims of the California wildfires.

Related:
Everything You Need to Make an Unexpected Emergency Kit at Home
Previous Next Start Slideshow
PhilanthropyNatural DisasterCaliforniaUS NewsFire

Olympics
The US Announces a Diplomatic Boycott of the Beijing Olympics: "It Cannot Be Business as Usual"
by Kelsey Garcia 12/06/21

Vaccinations
After Picking "Pandemic" Last Year, Merriam-Webster's 2021 Word of the Year Is "Vaccine"
by Kelsey Garcia 11/29/21

Joe Biden
For 85 Minutes Today, the United States Had Its First Woman President
by Kelsey Garcia 11/19/21

News
Kyle Rittenhouse Acquitted by Wisconsin Jury: "He Was Not Held Responsible For His Actions"
by Chanel Vargas 11/19/21

by Naledi Ushe 16 hours ago

by Kate Schweitzer 21 hours ago