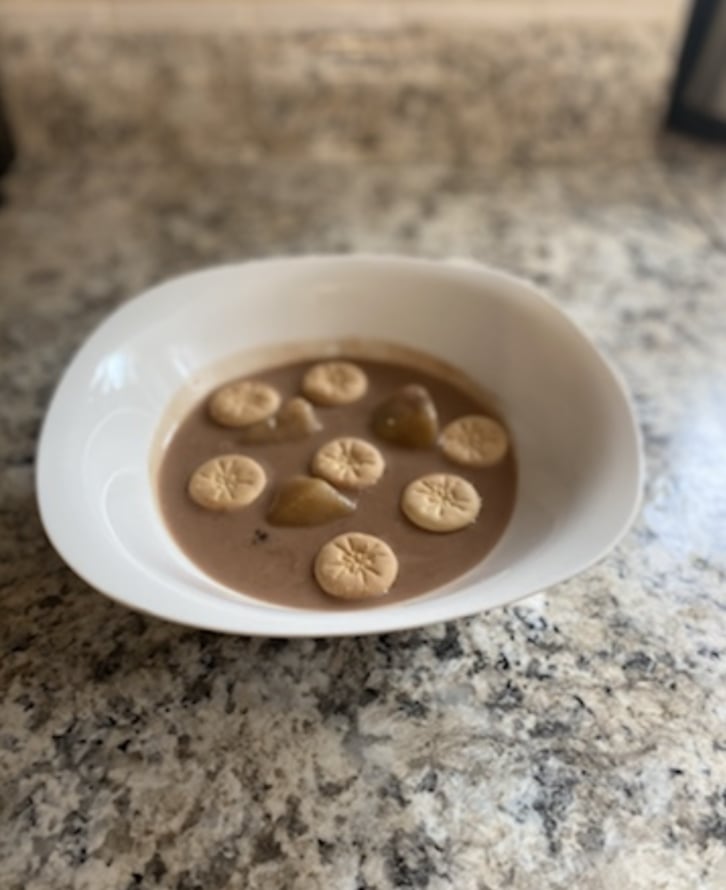 While I don't consider myself religious, every year I look forward to Semana Santa (Holy Week). Growing up, I remember my excitement for the meals we would eat that week including pescado de coco (fish in coconut milk) with arroz con guandules on Viernes Santos (Good Friday) and the large batch of Dominican habichuelas con dulce my abuela Celeste always makes. Dominicans love this rich and creamy dish that's traditionally made with red kidney beans, coconut milk, evaporated milk, sugar, raisins, cinnamon sticks, cloves, allspice, Dominican vanilla extract, and batata (Dominican sweet potato). But the history behind it is even more interesting than the dessert itself.

"Habichuelas con dulce, our widely revered dessert-style sweet bean dish, which like our Noche Buena or Christmas tradition of pasteles, is made and consumed only during Lent season. [It] is one dish that illustrates deep influence from many other cultures," says Yadira Garcia of Happy Healthy Latina, a certified natural foods chef and educator of Dominican descent. "As a Chef that prides myself on rescuing our gastronomic history for our current and future generations, while also promoting it with understanding, reverence, and pride; it's always fascinating to pick apart and examine the threads that weave together our dishes."

Where Does Dominican Habichuela Con Dulce Originate From?

"The origins of this dish are unknown. Some say it was brought over to the Dominican Republic via the trans-Atlantic slave trade, others say that it was brought from Turkey in the 19th century, but I believe both things could be true," says Dominican Pastry Chef, activist, and long-time supporter of No Kid Hungry, Paola Velez, who also co-founded and launched Bakers Against Racism.

Garcia points out that Dominican habichuelas con dulce isn't the only sweet bean dessert that exists. Quite a few cultures including Chinese, South African, Middle Eastern, French and Spanish cultures all have their own version of a sweet bean dish.

"The most notable similarities come from African slaves that had a dish called frijol colados with coconut milk and ashure, which is a sweet bean dish that comes from the Turkish. Lastly, Spaniards have a dish called firjoles azucarados," Garcia says. "It has also been suggested through island recounts and writing that the addition of sweet potato comes from our Taino ancestors. The ultimate combination seems to be a mix of several traditions and influences."

How Did it Become a Dish Associated With Semana Santa?

There's not enough information on why this dish is very specifically eaten during Semana Santa. But there are some theories based on when similar dishes from other cultures were consumed historically.

"This apparition of this exclusive Dominican dish is the culinary centerpiece to a Lenten celebration. Here we find historical references and ties to the way the Turkish from the Ottoman Empire, 19th century, consumed their dish ashure or "Noah's Pudding," as it was also referenced," Garcia adds. "Akin to the Turkish style of consumption during the Ottoman Empire, this sweet bean dish was specifically consumed after a period of fasting during the first month of the Islamic calendar. After which it was customary to share ashure with family, neighbors, and friends. Here we can find what may be one of the most formative or convincing influences in how the dish was consumed and became an integral part of our own religious celebration." Garcia notes that while it's traditional to see beans being made in a Dominican household several times a week, this specific dish is only reserved for this very specific celebration and season.

Why Are Sweet Crackers Usually Accompanied With This Dessert?

"Las galletitas de leche are engraved with a cross. While these milk cookies might have parallels with a communion wafer, I feel like casaba would most resemble the communion wafer," says Chef Velez. "But both casaba and milk cookies are available year-round. I think like in most Latine countries, we integrate our collective Catholic beliefs into everyday products. I mean, the Dominican flag does have the Bible in it."

Related:
Everything You Need to Know About Argentinian Rosca de Pascua

"From a culinary standpoint, we would observe this as a way to "sop up" or soak up the delicious bean juice, with the cassava being a salty offset to the sweet," Garcia says. "However, the infamous galletas we often see are made from a brand called Guarina, which puts crosses on its crackers. Lending to the deep influence, identification, and pervasiveness of Catholicism in the Dominican Republic."

While some enjoy this dish cold, most like to eat it hot in a small bowl with the Guarina Galletas Dulce de Leche sprinkled on top. I usually like to give myself at least an hour after consuming Easter dinner before I hit up the habichuelas con dulce because this will fill you up like an entire meal.