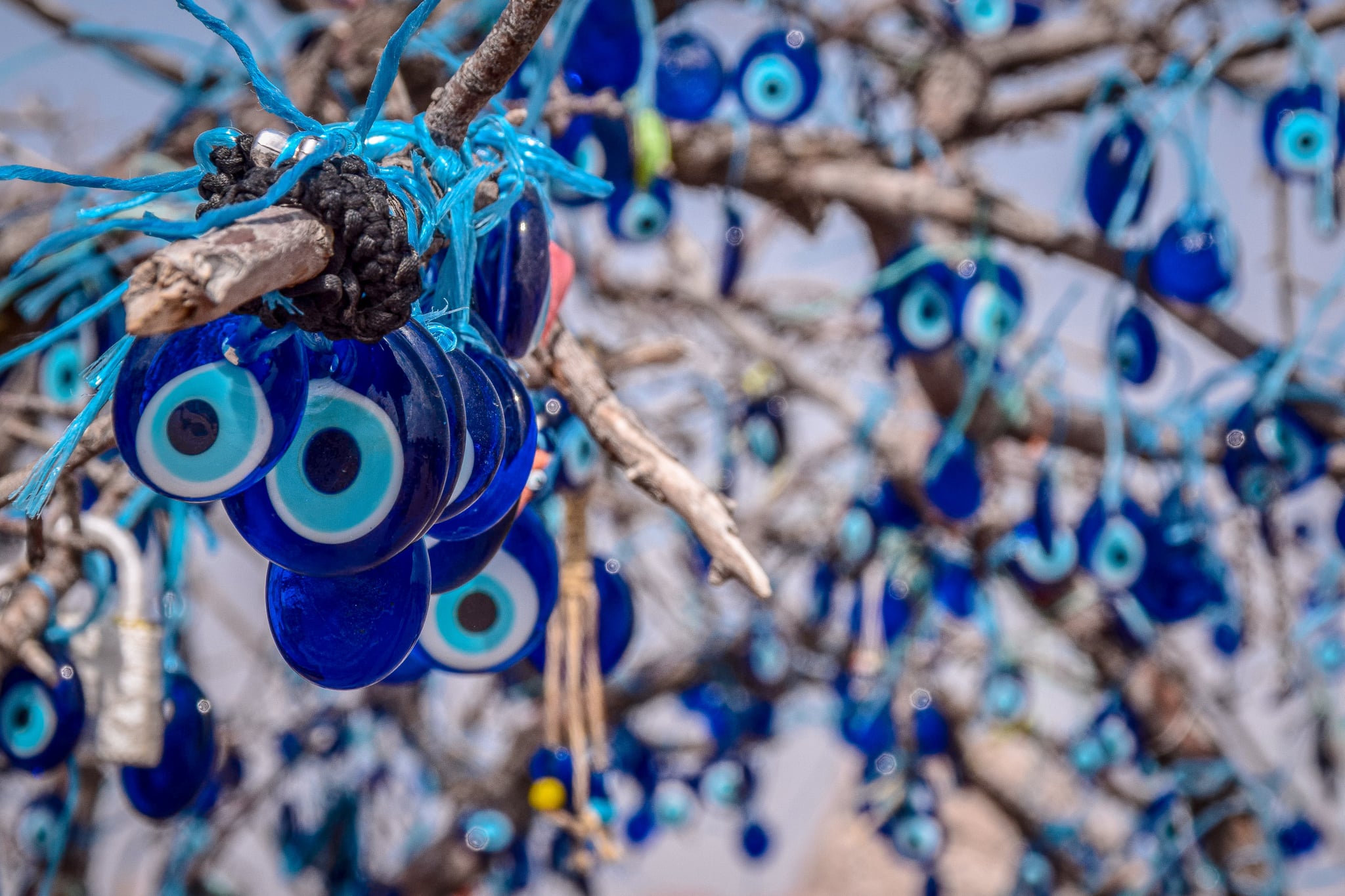 In many cultures, it is believed that a look of admiration or an envious stare can lead to illness and misfortune. In places like Mexico, the Caribbean, Latin America, West Africa, and parts of the Middle East, it's known as evil eye, or "mal de ojo" in Spanish. Some believe it is merely a superstition, while others attest to documented cases around the world. Many cultures believe mal de ojo can lead to illness and misfortune for the recipient. Since mal de ojo is often sent from one person to another unintentionally, it's important that we protect ourselves daily. As a result, many believers of mal de ojo wear mal de ojo jewelry to ward off negative energy from haters or people who truly admire them. They also protect the energy in their homes with evil eye home decor.

Related:
11 Ways to Use Agua de Florida (Florida Water) in Your Spiritual Practice

What Is Mal de Ojo?

It begins with the ojos (eyes). The spiritual belief is that when a person looks at another in the eye with envy, jealousy, malicious intent, or even admiration, the recipient receives negative energy. It can happen whether it's intentional or not. Some cultures also believe mal de ojo can be transferred from one person to another by a tone of voice. In both scenarios, the recipient may become physically ill afterward.

In general, el mal de ojo is said to primarily affect babies and young children. In the Yucatan Peninsula, the Indigenous Mayan communities believed that the young are especially vulnerable because they aren't yet resilient enough to repel it. But it is believed that adults can also find themselves at the receiving end of the evil eye.

Where Did the Belief of Mal de Ojo Originate From?

For thousands of years, there have been references to el mal de ojo, evil eye, or the eye of evil from cultures and religions around the world, including in early Jewish literature and biblical text. References of evil eye can also be traced back to 3000 BC in ancient Egypt, where it is referred to as aien al-hasoud in Arabic. From there, it is believed to have traveled to ancient Mesopotamia, Greece, and ancient Rome.

How Do You Know If You Have Mal de Ojo?

Many believe that the symptoms of mal de ojo can manifest in fever, nausea, vomiting, fatigue, insomnia, loss of appetite, and bad luck. In children, additional symptoms may include diarrhea and excessive crying. 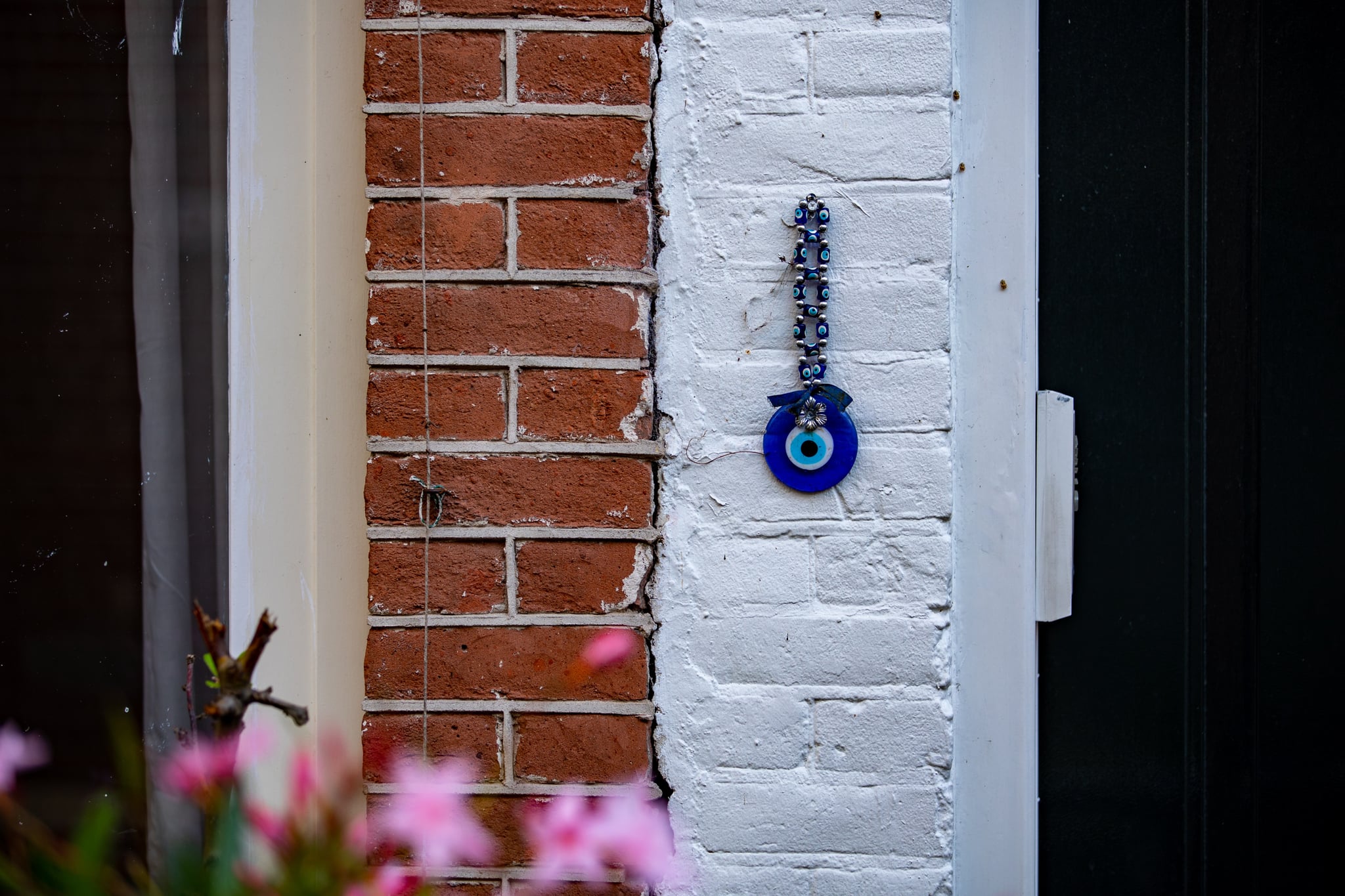 How Can You Protect Yourself From Getting Mal de Ojo?

In the Yucatan Peninsula, a red string bracelet is tied around the right wrist of the young to repel the evil eye. The string is red because the color is believed to be potent and alluring, attracting the evil eye to be absorbed within the bracelet. It is also advised that children do not remove the bracelet until they are old enough to speak up for themselves. An azabache, which is a jet-black gemstone, is also believed to protect babies from evil eye.

In other parts of the world, bracelets, necklaces, and other jewelry with a blue eye as the symbol are trusted to ward off mal de ojo. Some may even hang it on the outside of their door at home. In Spain, bronze has been used for thousands of years, as well as cowbells, and the cruz de Caravaca, a double cross, is also used by parents protecting their babies and young children from mal de ojo.

How Is Mal de Ojo Diagnosed and Treated?

Traditional Mayan doctors, or curanderx, diagnose mal de ojo by passing a raw egg all around the body of the sick child and then breaking it. If evil eye is detected, the curanderx will facilitate a spiritual limpia using different medicinal plants, among other treatments.

In other parts of the world, a raw egg is circled above the head of the person exhibiting symptoms multiple times. The egg is then left in a bowl under their pillow overnight. The test is positive if the raw egg becomes cooked overnight, indicating the person's blood was heated from el mal de ojo.

Eggs have also been used to cure mal de ojo. A raw egg is rubbed over the body of the ill person, then broken into a glass of water. The egg is placed underneath the person's bed to absorb the negative energy and protect them.

Mental Health
Saweetie's "3 Bs" — Balance, Breaks, and Boundaries — Are Her Antidote to Burnout
by Emily Oldenquist 3 days ago

Dove Cameron
Dove Cameron Opens Up About Her Dysphoria: "I've Been Struggling Lately With the Concept of Self"
by Taylor Andrews 3 days ago

Product Reviews
With This Matcha Tea, I Can Make My Go-To Lattes Any Time, Anywhere
by India Yaffe 5 days ago