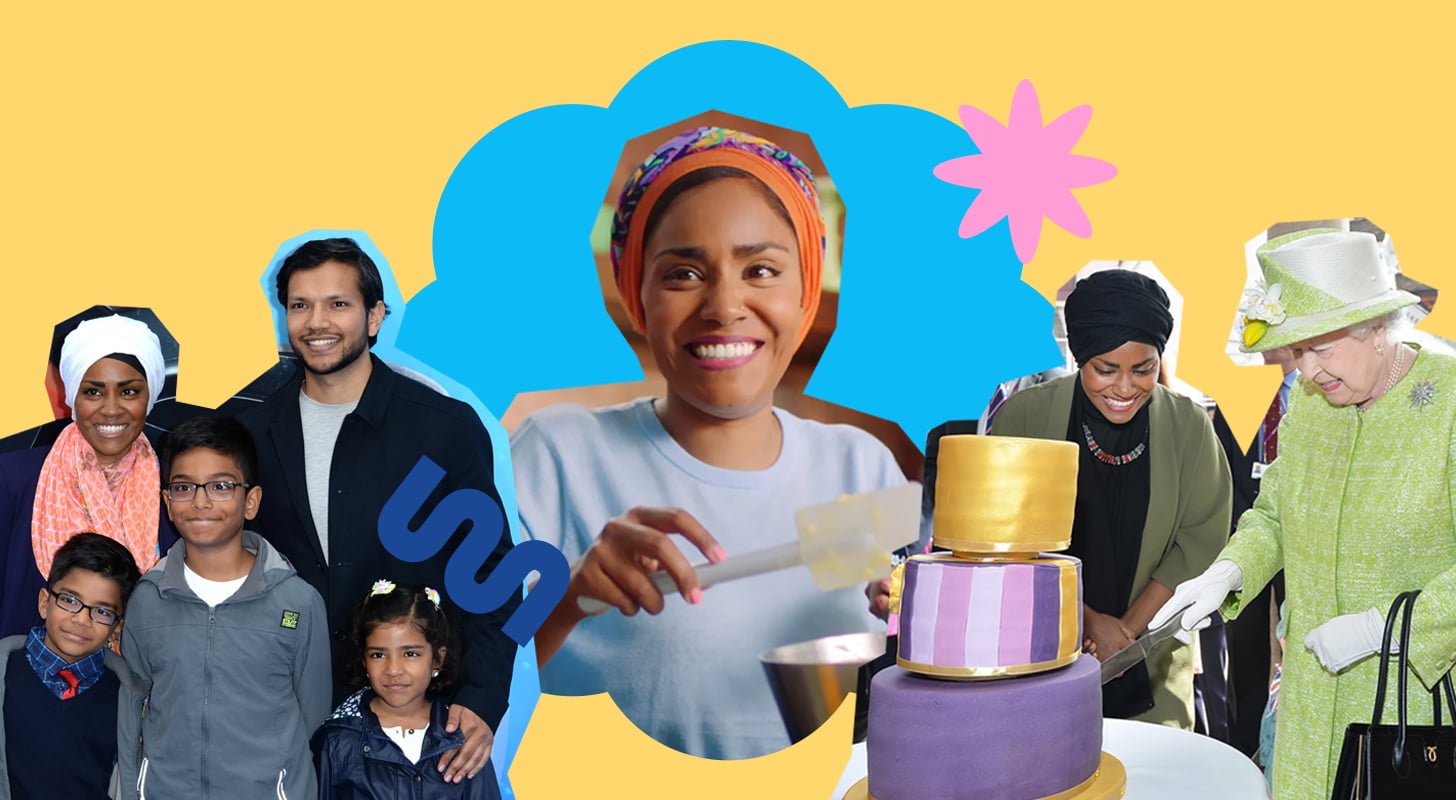 In the six years since Nadiya Hussain first charmed audiences as 2015's The Great British Baking Show champion, her life has been forever changed. Hosting a slew of high-profile TV shows (the most recent of which, Nadiya Bakes, hit Netflix in February) and publishing several popular cookbooks transformed reality show stardom into lasting success, a fact the mother of three told POPSUGAR she sometimes still struggles to embrace. "I think as humans, and certainly as women, we're very bad at telling ourselves that we're good at what we do," Hussain told POPSUGAR. "We cheerlead for others, but we don't for ourselves."

In a wide-ranging conversation in celebration of Women's History Month, Hussain explained why she refuses to let those nagging thoughts of self-doubt stop her from enjoying her career. And, of course, we talked about making messes and mistakes in the kitchen.

POPSUGAR: We can jump in with: how are you? How have you been doing during this time?
Nadiya Hussain: I'm okay, but one thing I've learned to say over the last few months is that I think it's so easy for us to just say, "Yes, I'm absolutely fine," because that's the simple answer. It's been really, really tough at times. But, that being said, we've had some really, really good days. And I can't even answer that just for myself because I feel like I am not a "me" anymore. I feel like for the last year, we've just been a "we" as a family, because we've spent so much time together. So, we've had tough days and not-so-tough days.

"As somebody who bakes every day, I make mistakes all the time, but that's part of the learning and finding confidence in the kitchen."

PS: You mentioned your family and I have to say the episode of [The Great British Baking Show] my husband and I watch the most often is the finale from your season. You can clearly see how much it meant to your whole family to see you shine. How does being a parent and a partner shape your ambitions?
NH: I still can't watch that [finale episode] back. For anyone who suffers with mental health issues, you can see that it's a lot more than just baking cake for me. It was a struggle and a journey that I went through over those 10 weeks. I watch it with my hands over my face, through my fingers.

But you can also see my family, my kids. You can see my husband and that little jump of joy that my dad does at the back [of the crowd]. I've never seen him lift himself so far off the ground. My life has changed so much in the last six years, but it's been shaped so much by the people around me. The decisions I make and the path that I take is shaped around my family, and it always has been and it always will be. Because I think once you have your own family and you have your own children, you don't live solely for yourself anymore. You live for them.

But one thing I've really, really been able to embrace in the last few years, especially this last year, has been living for me as well. That's been really important, because a lot of my decisions and my choices are based around my family, but sometimes it's lovely just to say, "No, this is just for me." And that's what my career is, I suppose. It is just for me. It is something that I really love to do. 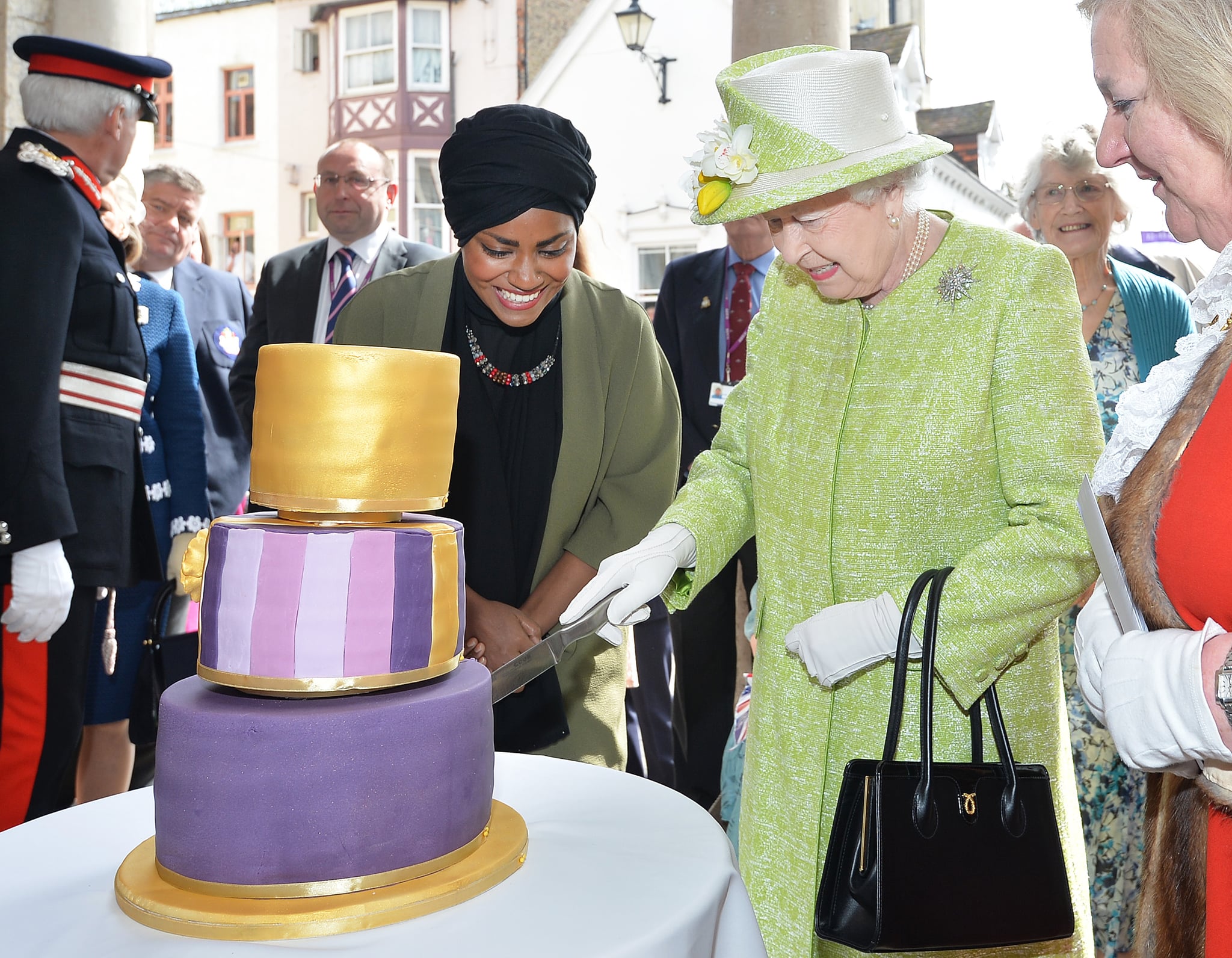 PS: I'm always so struck by how much fun you seem like you're having on camera, even though you're very open about struggling with anxiety. Has it gotten easier for you to just enjoy yourself at work when you're under a ton of pressure to perform? And if not, what are your tricks for coping? Because it looks like you're having a blast.
NH: I think when you suffer with mental health issues and you have anxiety, you become really good at painting a smile on. And there's a difference between painting a smile and actually being happy. For me, it took me a long time to understand the difference. And certainly in my career, it's taken me a good few years to actually realize that there's a difference between faking it and pretending you're having a good time, and actually having a good time. The biggest difference for me has been realizing that I'm actually good at what I do. I think as humans, and certainly as women, we're very bad at telling ourselves that we're good at what we do. We cheerlead for others, but we don't for ourselves. In those moments where I have doubts, and I'm anxious, and I feel like I'm in the wrong place and I shouldn't be doing it, and I'm overwhelmed with self doubt and anxiety, I remind myself: "What would you say to your kids right now?" And believe me, I'm the mum that if you played a bum note on the piano, I'll tell you, "That was bad." But, I'll also tell them that they are great, and they're special, and they're worth it, and they mean something to the world. And I tell myself in those moments of self-doubt, "What would you tell your children right now?" And that's what I tell myself.

PS: That's such a smart way to take yourself out of your own head too.
NH: Yeah, because we are so unkind to ourselves. And I have a picture of myself as I think I was about five years old, and I ask myself whenever I'm doubting myself or saying mean things to myself, if I would say those things to that really cute, curly-haired little girl in matching tracksuit bottoms and top. And I wouldn't, so that's a good reminder.

"A lot of my decisions and my choices are based around my family, but sometimes, it's lovely just to say,
'No, this is just for me.'"

PS: On Nadiya Bakes, you seem so comfortable asserting where your strengths are, and then inviting in new faces to fill in where you feel like they have something to add. That feels like such a confident move. Is that [a philosophy] you've always had?
NH: Ultimately, I work in an industry that I haven't always felt comfortable in. And even to this day, I don't always feel like I fit in. But I'm a firm believer in climbing the ladder, but also holding the ladder for other people to climb too. I am so lucky that I have this platform. I like sharing the platform. I love what I do and I know what I'm good at, but it is a platform that lots of people want to be a part of. And I love sharing it. I'm happy to share it. Just to be able to share that feels like such a privilege. It's a wonderful place to be able to do that. 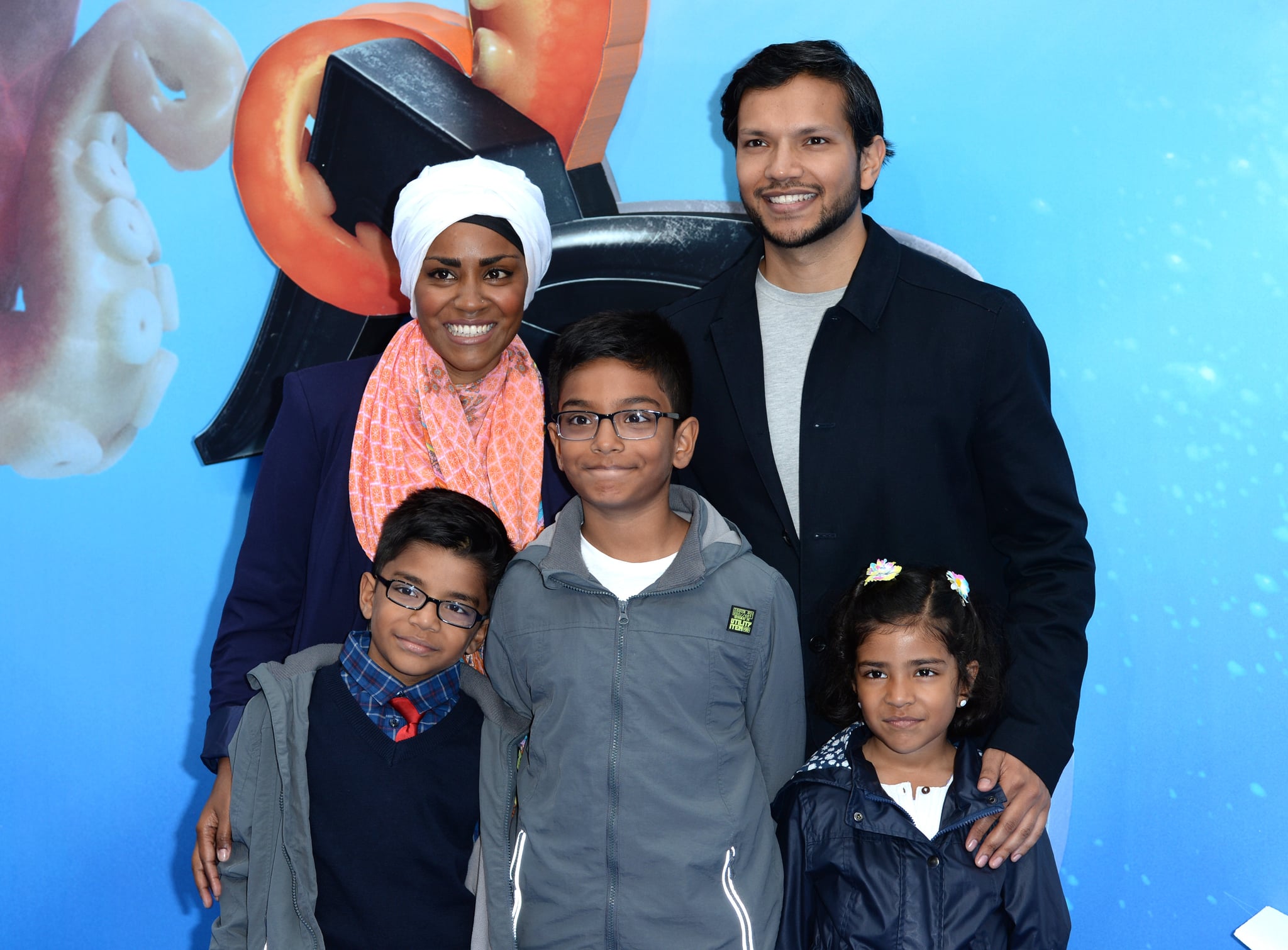 PS: So, you've baked the Queen's birthday cake. Mary Berry is a fan of yours. I saw Chelsea Clinton shouted out your show on Twitter. How do you wrap your brain around fame?
NH: Well, that was a bit of a shock when Chelsea Clinton said that she'd be baking the strawberry shortcake cupcakes, which was like, "What?" Stuff like that always shocks me. It genuinely does. But, I'm so lucky that I have the base — my three kids, my family. And you very rarely allow yourself to get to cloud nine because when I get to do all these amazing things, and these people follow me and know me from around the world, I still have to come home and clean my toilets. It's nice to have people with blue ticks follow you and comment, and people that know me from around the world, but when your granny rubs you back and says, "Make sure you rest and we're really proud of you," that's nice.

PS: Is it still relaxing to bake and cook?
NH: Yeah, it is actually. I find myself baking and cooking and it gets really frantic because the kitchen that I use at home is the same kitchen I use to cook and bake in. So it can get really frantic and it can get quite stressful at times, but I really love the simplicity of tidying up, and then just making a banana bread for the kids. And it just sits in the cake stand and they cut wedges out of it. I love that. And also I am also very spoiled because my husband does clean up after me.

PS: Lots of people have started stress baking this year. Do you have any advice for people just starting out baking who are frustrated or feel like they can't do it?
NH: It can be really disheartening if you go in the kitchen and something goes wrong. And then, you're like, "Oh, I'm not good at this." And you tell yourself that you're not a baker. Well, I don't think that's true.

I think that we all make mistakes. As somebody who bakes every day, I make mistakes all the time, but that's part of the learning and finding confidence in the kitchen. And whether it's cooking or it's baking, I think you have to make mistakes to learn. You have to be bad to be good. 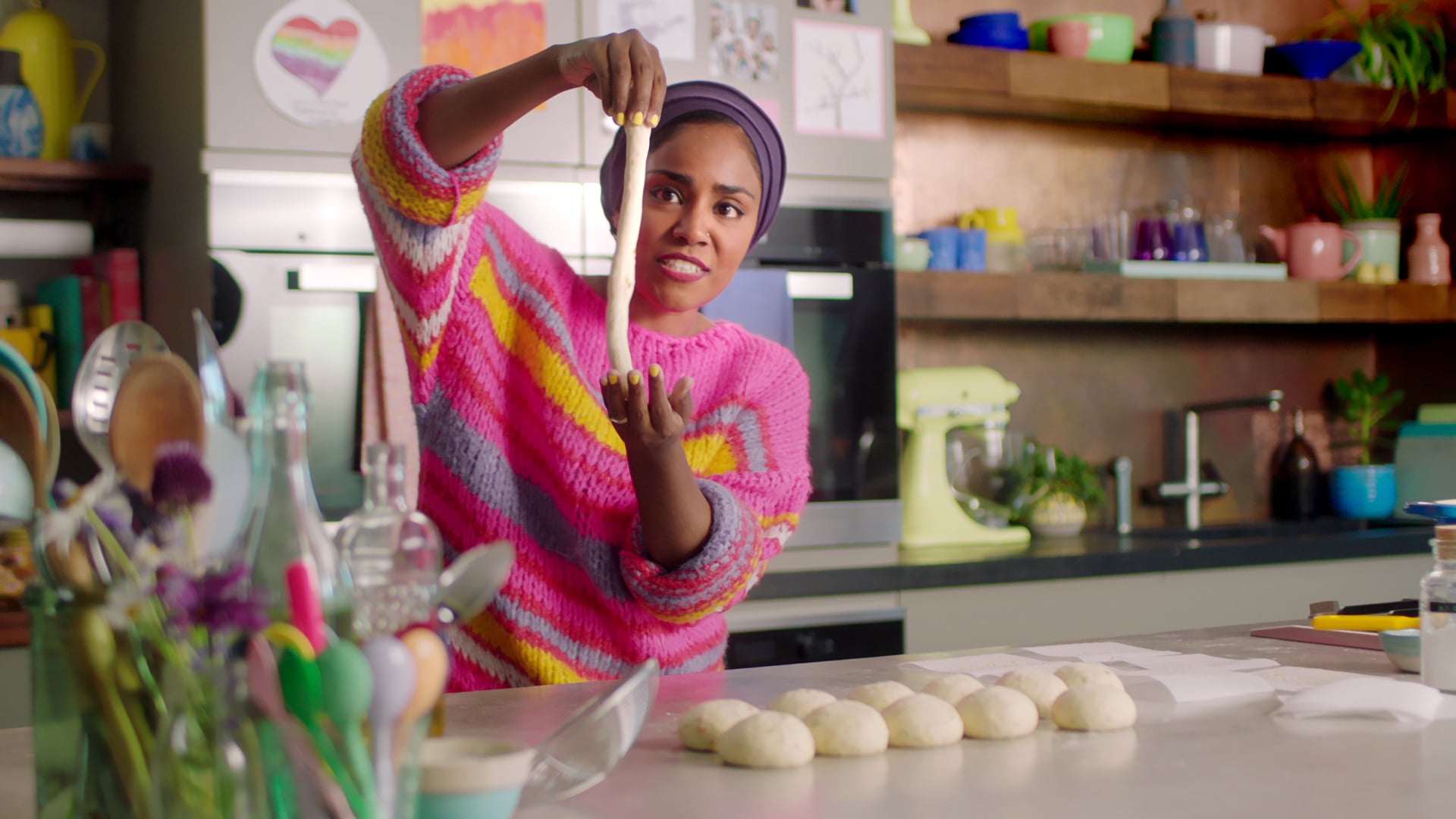 Rihanna
"Bling Empire" Star Kane Lim on His Friendship With Rihanna: "I've Known Her For 7, 8 Years"
by Monica Sisavat 16 hours ago

Unstoppable
Remember the Girl From That Viral 2014 "Yoncé" Dance Video? She's Now Your Fave TikToker
by Lauren Mazzo 2 days ago

Netflix
Who Was Tony Hughes, Jeffrey Dahmer's 12th Victim, and Where Are His Family Today?
by Pallavi Bhadu 3 days ago

by Angelica Wilson 13 hours ago

by Perri Konecky 17 hours ago

by Chandler Plante 19 hours ago