Bought some @benandjerrys and made some vegan ice cream bread ... ✊🏾 it’s good but I’m gonna make it into French toast for brunch

♬ Ice Me Out - Kash Doll

When she's not playing the flute while twerking or sliding into other celebrities' DMs, Lizzo spends time in the kitchen re-creating her favorite recipes and sharing them with her TikTok followers. The "Rumors" singer knows a good recipe when she sees one, especially when it comes to vegan desserts. One of her greatest creations caught ice-cream-lover's attention, and it's as exciting and sweet as the singer herself. Lizzo's now-viral vegan ice cream bread turns non-dairy Ben & Jerry's into a delicious treat that can only be made better by knowing that Lizzo herself was the creator behind it.

The recipe takes less than an hour to make, and only requires four ingredients. It's super easy to whip up when you're craving something sweet, and it'll also impress others with a sweet tooth because, well, it's ice cream bread, that's why! If you want to re-create Lizzo's satisfying dessert, just follow this recipe, and be 100 percent that b*tch in the kitchen.

If you want the bread to be more fluffy, add a bit more flour. 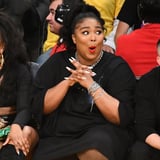 TikTok
Period-Blood Face Masks Are Trending on TikTok, but Are They Safe?
by Jess Beech 1 week ago

by Kelsey Garcia 14 hours ago

by Alicia Geigel 16 hours ago