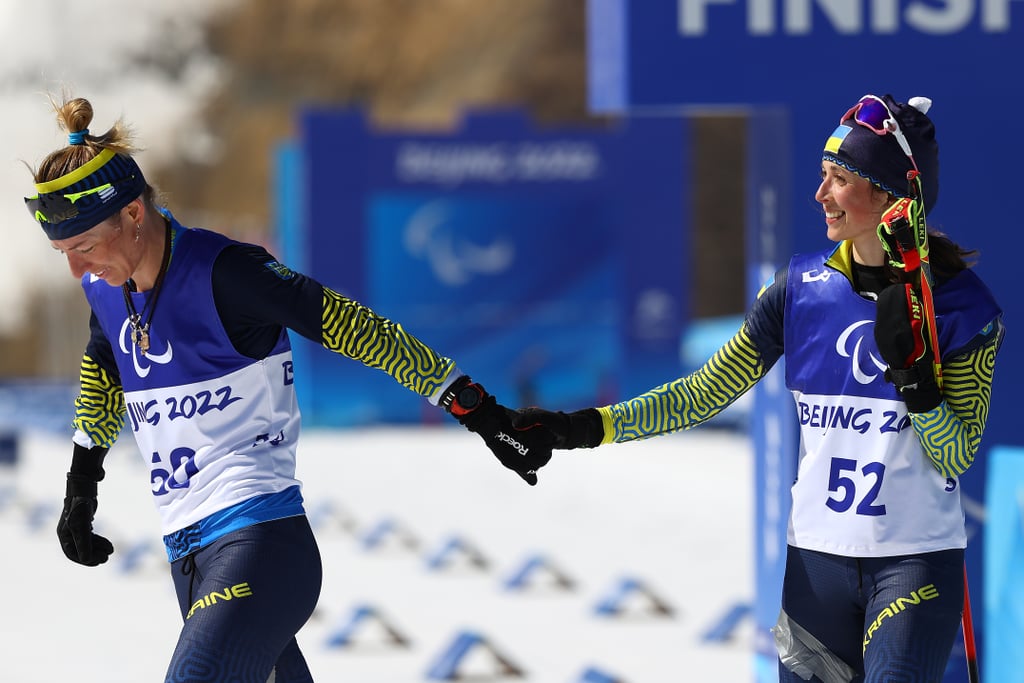 The Beijing Winter Paralympics began on March 4 and there have already been three clean Ukrainian gold-silver-bronze sweeps on the para-biathlon podium. Amid Russia's continued invasion of Ukraine, many of these athletes dedicated their medals to their home country.

On March 8, Iryna Bui earned gold in the women's para-biathlon middle distance standing event, followed by Oleksandra Kononova and Liudmyla Liashenko. "I was preparing for this special moment for 12 years. It was my aim and I've been training really hard all of this time," Bui said after the race, according to CNN. "But I came here with another thought. The whole world knows what's going on in Ukraine at the moment and now I know that I have a mission here [to] represent the whole country. The whole country is behind me and with this medal I will just one more time promote the Ukrainian nation."

"We would like to dedicate our results and medals to each and every Ukrainian and all the soldiers in the Ukrainian army who protect us."

Bui added, "We would like to dedicate our results and medals to each and every Ukrainian and all the soldiers in the Ukrainian army who protect us. With our performance we represent the whole country and this is our battle, here."

Silver medalist Kononova expanded on the toll of competing at the Paralympics. "This medal is really special and unique for me because now we have a very difficult emotional pressure," she said, per CNN. Kononova continued on to say it's been difficult to focus during competitions, and despite being "physically here," her thoughts, heart, and soul are back in Ukraine with her family and child.

Bronze medalist Liashenko pulled out of an earlier cross-country race after her home in Kharkiv was destroyed due to heavy bombing, according to Al Jazeera. Separately, USA Today reported that athlete Anastasiia Laletina withdrew from her biathlon middle distance sitting race on Tuesday after she got word that Russian soldiers took her father, a soldier in the Ukrainian army, prisoner. Many Ukrainian athletes are struggling and thinking of home, president of Ukraine's Paralympic committee Valerii Sushkevych told The New York Times. Sushkevych also reportedly called transporting the team to Beijing a "small miracle."

Related:
Oksana Masters Is Sharing Her Paralympic Dream With Ukraine: "I Am the Proudest"

"I'm really proud that today we can raise the Ukrainian flag in Beijing, so each and every person can see the flag once again. I'm proud that I made it," Lukyanenko said. "We are fighting here, not only in Ukraine but here on the sporting stage. We want to focus the attention of the European society on the war and the situation in Ukraine and ask for your help to stop this war."

Related:
Russia Is Out of the FIFA World Cup and Now the Paralympics
Previous Next Start Slideshow
SportsWinter Olympics 2022Paralympic GamesAthletes

Fashion Trends
Why Racket Sports Are Taking Over Your Friend Group, TikTok, and Closet
by Kalea Martín 22 hours ago

Sunisa Lee
Suni Lee's NCAA Career Is Ending, but Her Olympic Comeback Has Officially Started
by Maggie Ryan 3 weeks ago