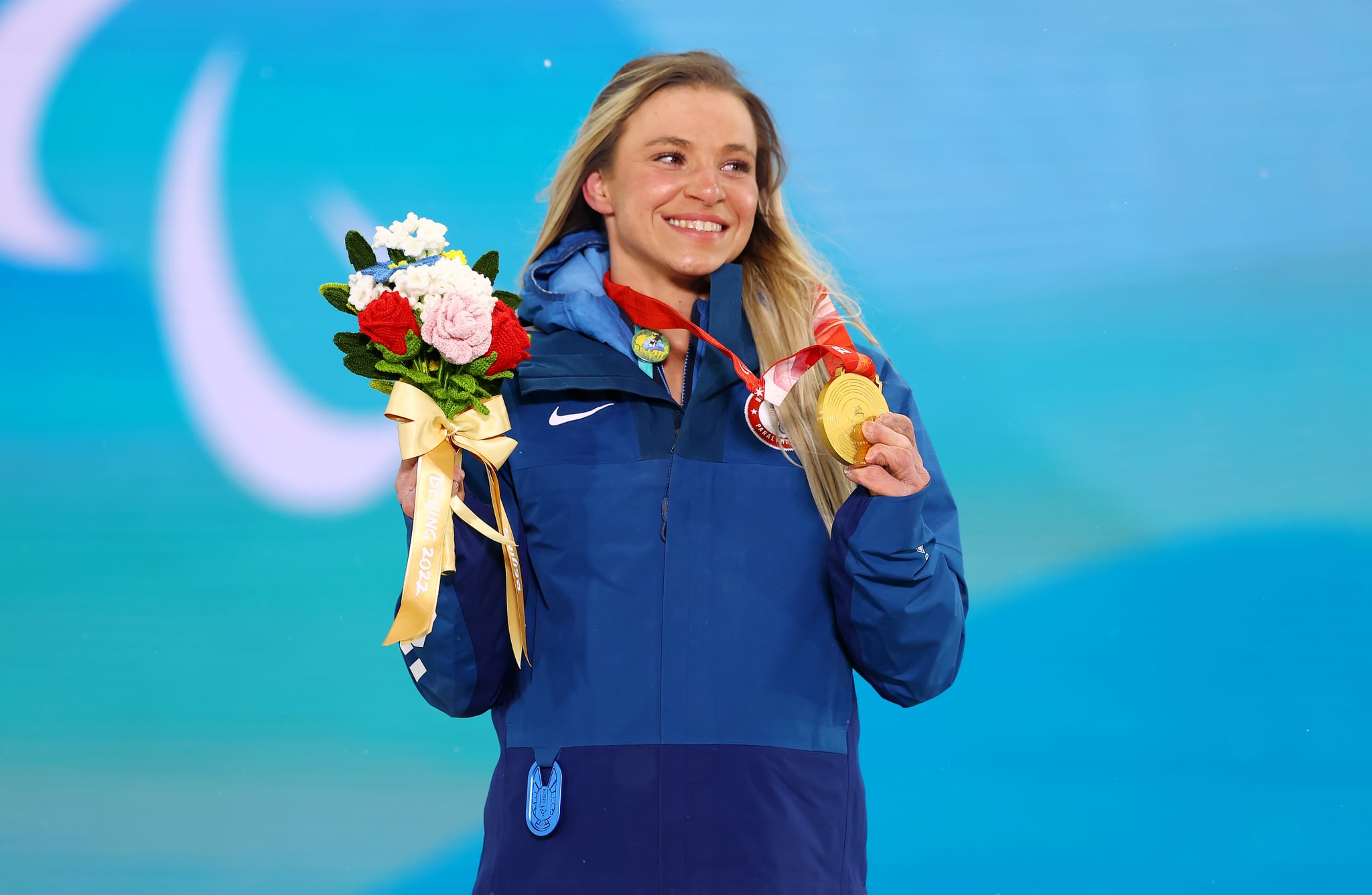 In her sixth Paralympic Games to date, Oksana Masters has already won three medals: a gold in women's biathlon sitting sprint, which was Team USA's first gold of the Beijing 2022 Paralympics; a silver in cross-country skiing sitting long distance; and a silver in the women's biathlon sitting middle distance event. Masters, who was adopted from Ukraine at 7 years old, recently voiced support for her birth nation.

"Some feelings can't be put into words. I am beyond proud to stand on the podium representing the heart, fight, love, resiliency, and pure joy for two countries," Masters wrote in a March 8 Instagram post along with an image of her gold-medal podium moment — her first Paralympic gold in biathlon. She thanked US Paralympics Nordic Skiing for helping to make that moment possible.

Masters continued, "I not only finally got to hold my dream, but I also am sharing parts of it with my home country of Ukraine especially for the young kids with disabilities." She shared that she'll be donating proceeds from her Paralympic prize money to No Child Forgotten, a campaign giving disabled children in Ukraine access to medical care. As of this writing, the campaign has raised over $14,000 of its $50,000 goal.

"While the Ukrainian people are fighting for their homes and peace, I want to make every start line and finish line mean something much bigger than a race or a result."

Masters called on the public to support No Child Forgotten in another Instagram post on March 4, writing candidly about the emotional toll of competing during this time. "It has been difficult to find my passion and desire to compete at these Games amid the war my home country of Ukraine is enduring. I feel selfish, helpless, and guilty for being here," she said. "However, I have always been so proud to be Ukrainian, felt so much pride at the sight of the Ukrainian flag, and now more than ever, I am the proudest to say I am Ukrainian. My mom always said my Ukrainian heart made me resilient; it made me a fighter."

Masters continued that her efforts moving forward are far from just personal. "Every pole stroke, I will be racing for the families and kids in Ukraine with disabilities," she wrote. "While the Ukrainian people are fighting for their homes and peace, I want to make every start line and finish line mean something much bigger than a race or a result."

Masters, who was born with several birth defects believed to be linked to radiation from 1986's Chernobyl nuclear power plant disaster, states on her website that she spent seven years of her childhood in three separate orphanages. After moving to the US with her adoptive mom, she later underwent reconstructive surgeries on her hands, as well as amputations of both legs above the knee.

"I want to help make sure no child is forgotten," Masters wrote in her initial Instagram post. "I know how it felt to be a child in Ukraine with disabilities where the resource for medical help was slim to non-existent — more now in the midst of a war."

Fashion Trends
Why Racket Sports Are Taking Over Your Friend Group, TikTok, and Closet
by Kalea Martín 16 hours ago

Sports
US National Teams Are Splitting World Cup Prize Money. The Internet Is Mad About It.
by Maggie Ryan 21 hours ago