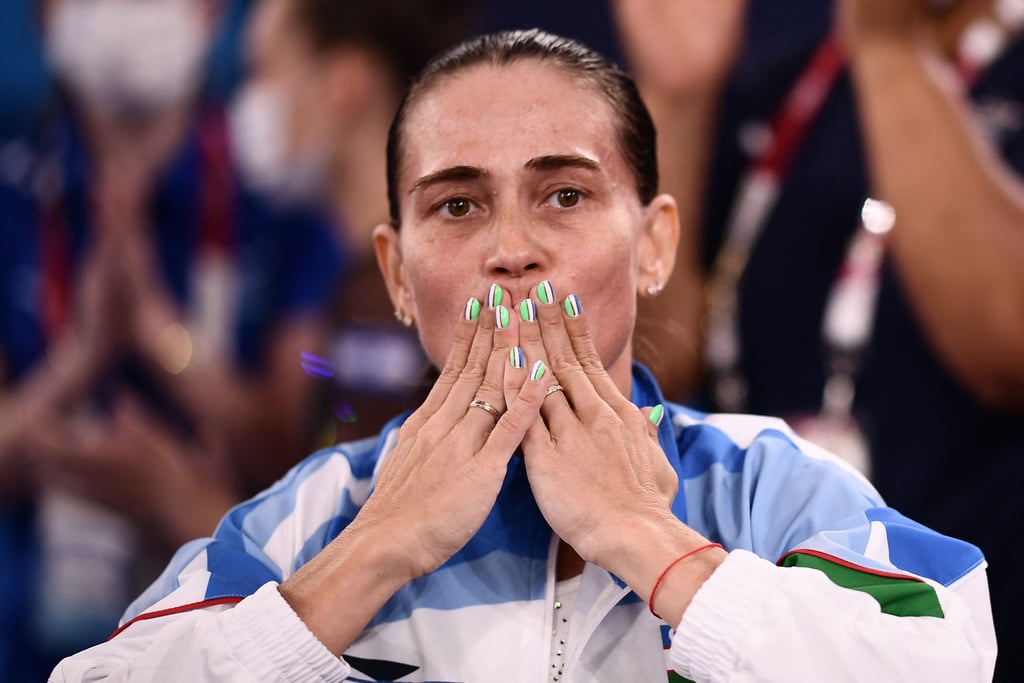 Just by walking out onto the competition floor for the July 25 women's artistic gymnastics qualification round, Oksana Chusovitina made history. She's the oldest Olympic gymnast ever, and has now set a gymnastics record with her eighth Olympic Games — though she says these Games are her last. Chusovitina's first of two career Olympic medals came in the color gold back in 1992 while she represented the former Soviet Union's Unified Team. She has competed on the international stage for Germany and Uzbekistan as well, and she performed vault in Tokyo for the latter.

Vault has long been Chusovitina's speciality — she's won nine world medals on that event in addition to a silver Olympic medal from 2008, when she represented Germany — and despite the fact that she wanted to add another piece of hardware to that list in Tokyo, she did not qualify through to the vault final taking place on Aug. 1. She waved to people in the stands (what few there were) and arena staff, visibly emotional.

Chusovitina would have had to finish in the top eight gymnasts on vault in order to move on. She landed 14th in the standings without factoring in the two-per-country limit, and she showcased two vaults: a handspring Rudi, named after her, and a one-and-a-half twisting Tsuk.

"It was really nice," Chusovitina said, according to the International Gymnastics Federation (FIG). "I cried tears of happiness because so many people have supported me for a long time. I didn't look at the results, but I feel very proud and happy. I'm saying goodbye to sports. It's kind of mixed feelings. I'm alive, I'm happy, I'm here without any injuries, and I can stand on my own!"

Chusovitina is a legend in the sport for a great number of reasons — how about those five skills she has named after her?! — and her exit from gymnastics is bittersweet for fans and current competitors alike. Ahead, you'll find memorable snapshots and footage from Chusovitina's curtain call at the Olympic Games.

Sports
Aly Raisman and McKayla Maroney Have a Message For Sexual-Abuse Survivors: You're Not Alone
by Samantha Brodsky 3 days ago

Running
3-Time Paralympian Melissa Stockwell Learned That Despite It All, "You Can Surprise Yourself"
by Samantha Brodsky 4 days ago

Olympics
Jessica Long Has 29 Paralympic Medals, but She Knows Swimming "Doesn't Define Me as a Person"
by Maggie Ryan 5 days ago