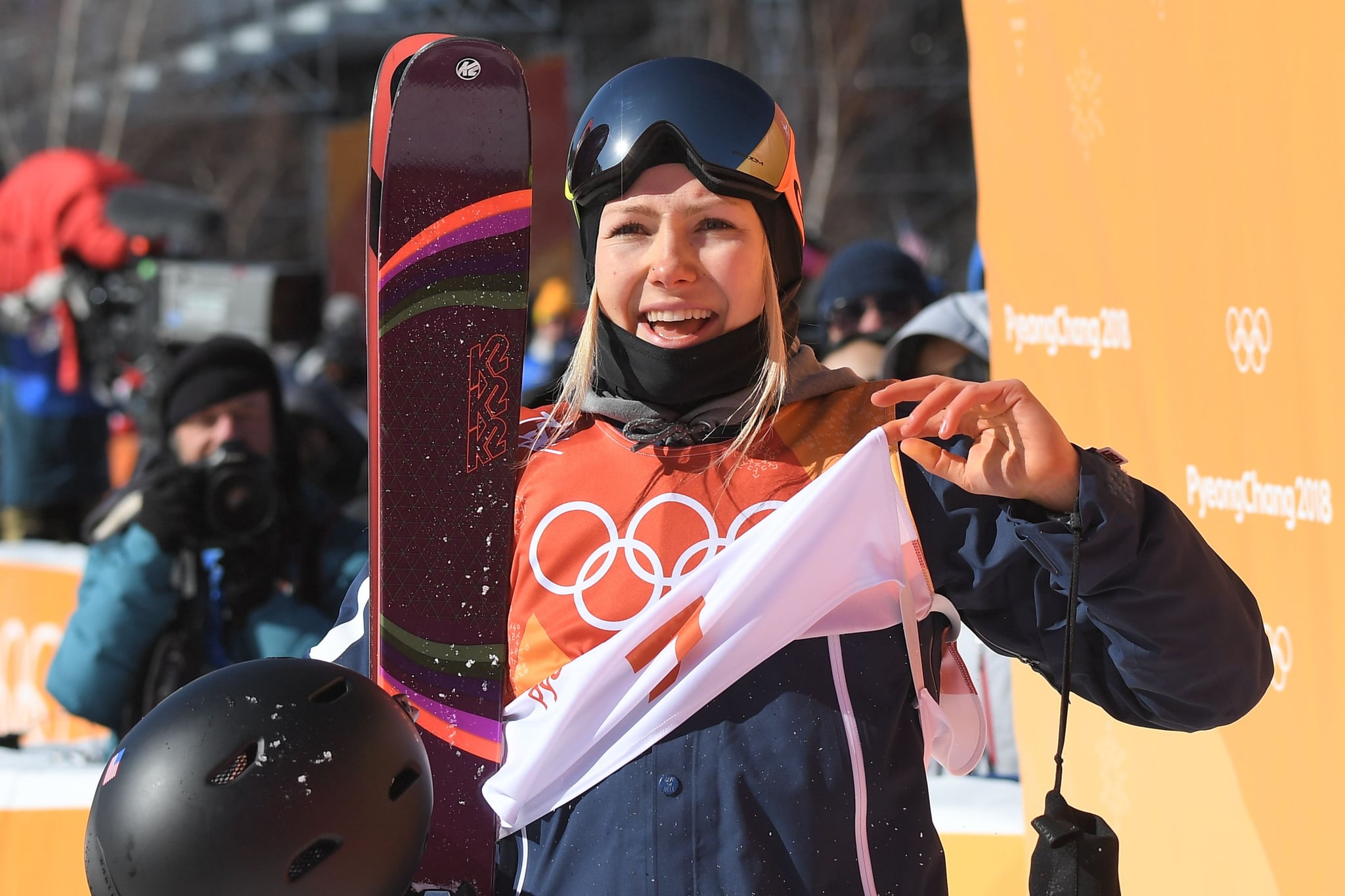 Maggie Voisin knew in her heart she wanted to turn pro around 12 years old. Voisin, now 23, grew up skiing on Montana's Whitefish Mountain Resort and has qualified for her third Olympic Games. She's set to compete in the slopestyle and big air freestyle skiing competitions in Beijing, telling POPSUGAR, "There's a sense of flying, but more than anything, it's just that adrenaline rush and pushing myself and my body to do something totally amazing."

Voisin qualified for her first Olympics, the 2014 Sochi Games, as the youngest member of Team USA — she was 15. However, she fractured her fibula in training and didn't compete. Four years later in PyeongChang, she landed just off the podium in the slopestyle event. That fourth-place finish and a few injuries along the way (namely two torn ACLs) motivated her to lock down this third opportunity to call herself an Olympian. Making Team USA again, she says, "was just so, so huge and gratifying."

Voisin adds, "I've accomplished so much in my career and I'm so grateful for that, but I feel like an Olympic medal might be one thing I could say I'm missing. So honestly, for me, I feel like if I was to bring home any podium medal . . . bronze, silver, gold . . . I obviously would be super grateful." Ahead of Beijing, Voisin will take part in the X Games this week in Aspen, hoping to utilize the competition as one last training run while still throwing her hardest tricks. She's a seven-time X Games medalist and says that since it's one of the "biggest events every single year, the girls are always riding at the highest level."

Voisin feels healthy and notes that she takes good care of her body by staying strong in the gym, focusing on the food she eats, and utilizing tools for recovery. One of those tools, she says, is cold exposure, specifically the Wim Hof Method. Created by Wim Hof, an extreme athlete and motivational speaker, the method involves oxygen-heightening breathwork and cold therapy. Read more about the Wim Hof Method and its alleged benefits here.

For cold exposure, Voisin says, the "simple way" is to take a cold shower, but she and her boyfriend, a fellow athlete, have often plunged into a lake midwinter. Below, you'll see a photo and, if you swipe through, a video of Voisin, swimsuited up, submerged in an icy body of water (and yes, she actually had to put a hole in the lake to reach the freezing waters underneath).

"I miss cold plunging in Whitefish Lake soooo much! With all my traveling cold showers have been my go to lately," Voisin wrote on Instagram this week. "I'm not usually a new years resolution type of person but this year I decided I wanted to do 3 minutes of cold exposure every single day this year. I'm committed to keeping my body healthy & happy and I believe this is the secret!"

Voisin further tells POPSUGAR that her New Year's resolution to do daily cold exposure reduces stress and "raises your endorphins a crazy amount." We're sending her warm wishes leading up to the Beijing Olympic Games. (Looks like she might need it to fend off all that cold!)

To learn more about all the Olympic hopefuls, visit TeamUSA.org. Watch the Winter Olympics, beginning Feb. 3, on NBC.

Sports
The Mental Health Awakening Has Reached the Sports World — Now What?
by Maggie Ryan 3 days ago

Sports
Finally, a Bar With Only Women's Sports Playing
by Frankie de la Cretaz 1 week ago

Cardi B
Watch Cardi B and Normani Leave Their "Blood, Sweat, and Tears" on the Tennis Court
by Chanel Vargas 1 week ago