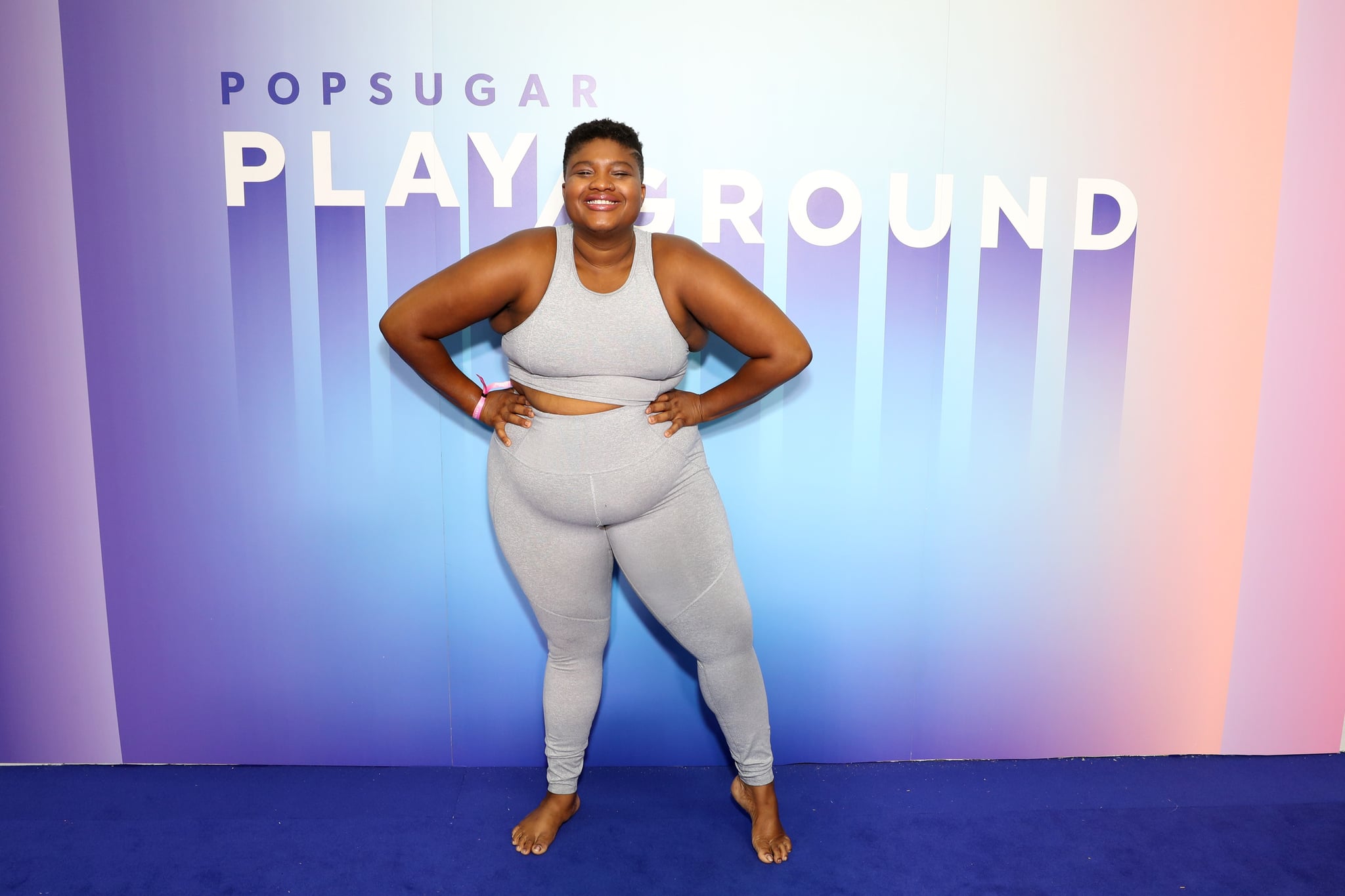 Jessamyn Stanley is all about embracing the moment, and right now, the moment involves "a lot of chaos."

It's mid-May, and Stanley, the yoga teacher, author, and entrepreneur with over 470,000 followers on Instagram, is back at her home base in Northern California following a cross-country road trip to North Carolina for her high school reunion. Yes, a cross-country road trip, because over the past year, Stanley and one of her partners have been living full-time in an RV. That lifestyle change, and the upheaval that came along with it, has been transformative, Stanley says. "Because of all of the chaos, I'm finding and accepting joy more readily now in the moments when it's there," she tells POPSUGAR. "When sh*t is hitting the fan . . . I'm just like, 'Oh yeah, these are the sweet moments. It's supposed to be like this. Chaos is the nature of life.'"

Stanley had never considered full-time RVing or small-space living until last year. She was playing a game with friends involving a stack of cards with different epithets, and the group had to name the person in the room who best fit each description. A friend pulled a card that said, "Who here would be most upset if they lost all of their belongings in a fire?" and Stanley was the one that everyone pointed to.

"It's supposed to be like this. Chaos is the nature of life."

At first, she was confused. "I was like, 'I really don't think I would care that much, honestly,"' Stanley says. "But when I looked a little bit more critically at my life, I was like, 'No, all that my friends see is me talking about these new clothes that I got' . . . I didn't realize how much of my life had become focused on what I have."

At the same time, Stanley was feeling a need to be more grounded, in a literal sense. "The more that my career expands and the more that my public profile grows, the more that I feel like I need to have a closer connection to the earth," she explains. "I catch myself going from air-conditioned box to air-conditioned box, car to house, house to office, and never actually just being in nature." The desire to downsize and feel more connected to the earth came together as she and her partner decided to move into an RV. Stanley ended up selling about 70 percent of her possessions in the process.

For the first six months, they drove from North Carolina to Maine, lingering in New England as summer turned to fall. "Just spending time up there watching the leaves change, that was something that my spirit really needed," she says. Their house in Northern California, where Stanley is now, is more of an office/studio; Stanley and her partner are still living in the RV. The entire West Coast is within their reach. "Being able to get up to Washington and even up to Canada and then to be able to go down to Mexico even, it's right within our grasp," Stanley says. "I've been able to see so much of this country."

Stanley describes feeling spiritually fulfilled living in a smaller space. She still likes buying clothes, "but because I live in a much smaller space now, I am more present to the amount that I'm consuming and that feels really good."

Of course, the natural question to ask a yoga teacher who lives in an RV is how in the world she practices yoga. For Stanley, the downsizing of her practice actually felt like a return to her roots. "When I first started practicing yoga at home, my partner and I were living in a very small apartment, and I literally had to push all the furniture out of this one corner of the room to have space to practice," she recalls. "I came to practicing with very little space."

While RVing, Stanley practices outside as often as she can, hitting the mat on top of a mountain or as the sun is rising. Of course, there are times when that's not possible — when it's raining outside and Stanley and her partner are sharing a yoga mat laid out on the floor of the RV. "We have the FeetUp inversion trainer in there and we're kicking the air conditioner," she says. "That's what I've always felt is so powerful and incredible about yoga, is that it really has nothing to do with the aesthetics. It doesn't matter if you have a mat, it doesn't matter if you have a lot of space to practice or the right outfit . . . You can make it work wherever you are."

"That's what I've always felt is so powerful and incredible about yoga, is that it really has nothing to do with the aesthetics."

Stanley's yoga practice is flexible, changing day to day. "I'm beyond this place of feeling like, 'OK, I have to practice at the same time every day. I have to practice for the same duration every day,'" she says. Right now, she's into Iyengar yoga, which she describes as "a very alignment-based practice, very much focused on props" like stools, rope, walls, wedges, and sandbags. "You're able to get a deeper opening in the postures, but also a deeper opening into your spiritual self," Stanley explains.

Part of Stanley's practice, too, is understanding that "everything is yoga," she says. "There are many different ways to practice yoga postures and to practice meditation and breathwork, some of which have absolutely nothing to do with a yoga mat or anything that looks like physical exercise." Stanley's goal is to allow the most difficult, challenging parts of her personal and professional life to serve as opportunities for meditation, yoga, and breathwork. "That is not often pretty," she says, "but it feels exactly where my yoga practice needs to be."

It's especially relevant as her career continues on its upward trajectory. Stanley says she has some exciting projects coming up in the next few years, including her ongoing collaboration with Adidas, the new Gatorade G Fit campaign that she's a part of, and a third book to follow up "Every Body Yoga" and "Yoke." She teaches online classes at The Underbelly and cohosts a podcast called "Dear Jessamyn," which is focused on relationships. What Stanley's most excited about, though, is "finally being in a place in my career where I can focus on doing the things that I really enjoy," she says. "Creating content, doing things that are meaningful and that allow me to connect with people in a way that feels really authentic and spiritually fulfilling."

As much as she's looking forward to the future, Stanley is really just focusing on enjoying the present moment, from days in the RV to sunset yoga practices to all the work meetings, long miles, and — yes — chaos in between. "It just feels like a way to implement some of what I learned through the pandemic, which was that today is the only day that really matters," she says. "If I can really appreciate the present moment and take time to see the things that I want to see, then I'll be happier in the end."