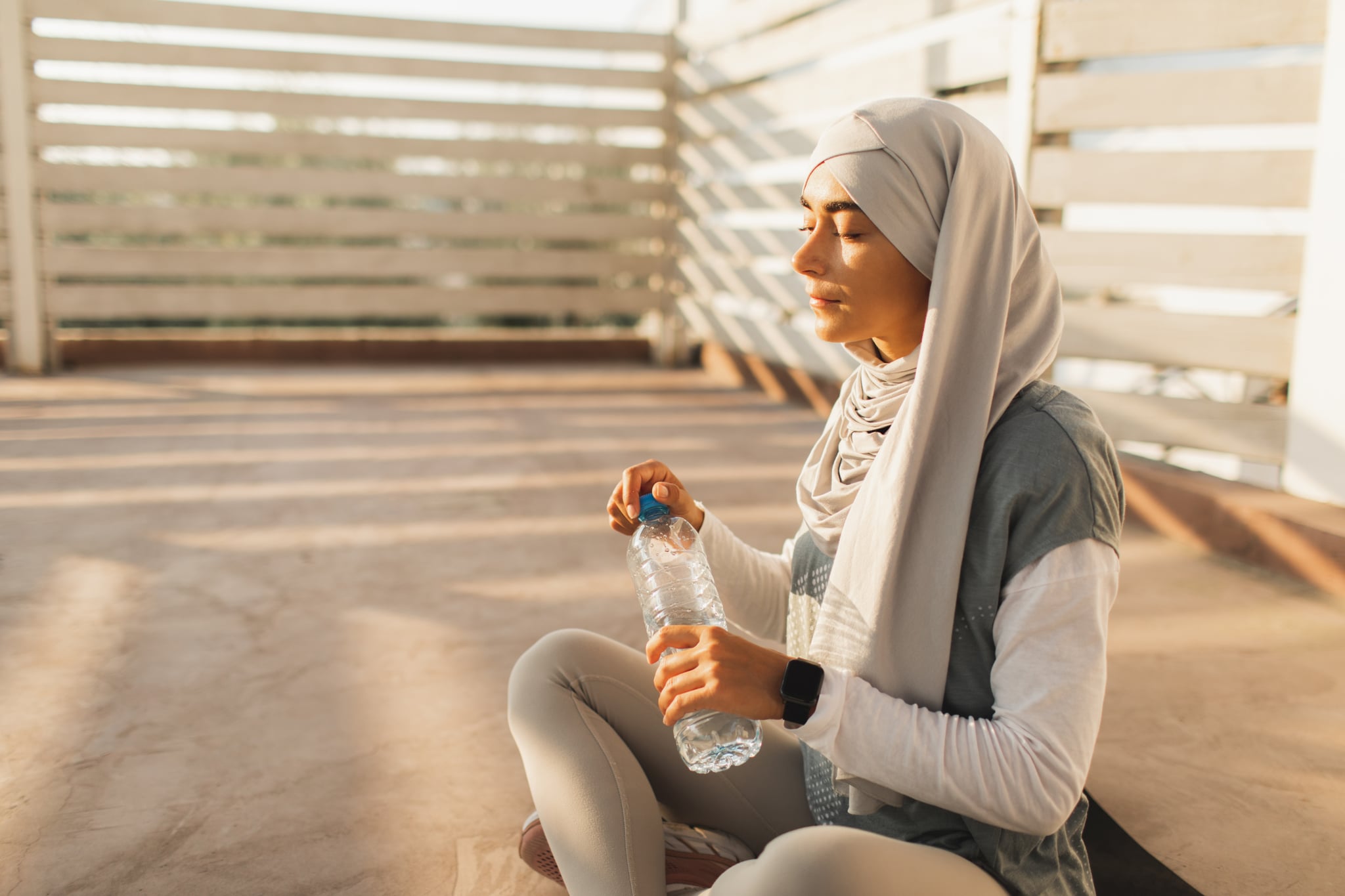 Whether you're a practicing Muslim with plenty of experience fasting for Ramadan or someone new to the faith, you may have some questions about how to fast during the holy month without it impacting your health in a negative way.

The good news is research shows that Ramadan fasting is safe for healthy people (i.e., people without any chronic or current health issues). There appear to be no adverse effects of Ramadan fasting on the body's respiratory and cardiovascular systems, blood profile, endocrine system, or neuropsychiatric functions. (Note: If you're pregnant or breastfeeding, you shouldn't fast, and if you have any chronic health conditions, you should make sure to check with your doctor first, according to an article published by the Massachusetts Department of Public Health.)

Considering you're not allowed to eat or drink (not even water) from dawn to sunset, one of the major questions you may have is how to stay hydrated during Ramadan (especially if you're also trying to keep up your exercise routine). It's a valid concern. After all, you've probably heard the fun fact that the human body is made of up to 60 percent water, making hydration super important to keep it running smoothly. When you're dehydrated, it "can cause headaches, dizziness, fatigue, cramps, and muscle aches," Reda Elmardi, RD, CSCS, owner of The Gym Goat, says. Dehydration can also mess with your digestion, mood, and skin.

But when you're limited to drinking water only before dawn and after sunset, how can you ensure you're getting enough? Here, Muslim dietitians weigh in, so you can rest assured your body will be fine while you're observing this holy month.

Related:
Eat Healthy For Suhoor and Stay Energized During Your Fast With This Dietitian's 6 Tips

Tips For Staying Hydrated During Ramadan

Spread out your consumption.

Rather than downing a bottle of water and calling it a night, try to drink water throughout your waking hours when you aren't fasting. "To stay hydrated during Ramadan, try to spread out your water intake by consuming 12 to 16 oz. of water every one to two hours," Mariam Eid, RDN, LDN, says. "You should aim to consume at least two liters (0.5 gallons) of water per day," Elmardi says.

Plain water is a great choice, but you can also make fruit- or herb-infused water. According to Lamees Lahham, RD, dietitian at Sincere Nutrition in Dublin, OH, "It's a fun and refreshing way to hydrate as well as replenish essential vitamins and minerals in the body."

If you're focused on both food and water during a meal, they'll be competing for space in your stomach. "Drinking more than 16 ounces of water at an Iftar meal can prevent you from eating enough," Eid says. Your body needs those nutrients and fuel from the food, so remember to spread out your water and fluid intake before and after the meal, as recommended by Eid above. But during meals, make eating a priority.

It might be a surprise, but most people get about 20 percent of the water they need from food, according to the Academy of Nutrition and Dietetics. "Hydration isn't just about how much water you manage to drink between dusk and dawn (although that is important too!)," Lahham says. "Hydration comes from foods we eat as well. Foods have water content, and focusing on foods with higher water content is the goal!"

To help hydrate when you're not fasting, eat water-rich foods, including fruits, vegetables, soups, and stews, Elmardi says. Bone-broth-based soups, smoothies, and salads are all good choices because they contain lots of hydrating foods, Lahham adds.

"Smoothies are excellent for suhoor and can be customized to suit your tastes and needs. Start with a base such as milk, yogurt, or coconut water," she says. "Add in fruit, vegetables, seeds, or grains. Depending on what's added, smoothies can provide hydration, antioxidants, vitamins, minerals, and even protein, making them a fast and easy way to fuel you through the long fast."

"It's important to know that some foods make us thirstier and require more fluids in our system," Lahham says. "Excess salt and sugar will pull water out of cells, leaving your body thirsty, so choosing the right foods to prevent thirst is just as important as hydrating." Try to avoid or limit fast foods, fried food, and processed or instant meals, because the sodium content in these foods is usually much higher than desired, she says. If you're eating something packaged, you can use the "percent Daily Value" on the nutrition label to help you judge whether something is high in sodium; as a general rule, five percent DV or less of sodium per serving is considered low, and 20 percent DV or more of sodium per serving is considered high, according to the Food and Drug Association.

The same concept applies to sugary items: "Swap sugary drinks (sodas or fruit juices with added sugars) with flavored water, milk, fruits, and vegetables," Lahham says. You can use the same DV trick here: five percent DV or less of added sugar is considered low, whereas 20 percent or more is a high source of added sugar, according to the FDA. Remember that salt and sugar aren't evil (in fact, your body needs both), but when consumed in excess, they could work against your attempts to remain hydrated.

When Can You Break Your Fast to Drink Water?

"Generally speaking, it is permissible to break a fast in Ramadan if you feel ill or extreme hunger or thirst that can put your body in harm," Lahham says. "If one feels they are putting themselves in danger by continuing to fast, then it is permissible to break your fast . . . [but] please consult with your local Muslim scholars for details about breaking fast as it is not something to be taken lightly!"