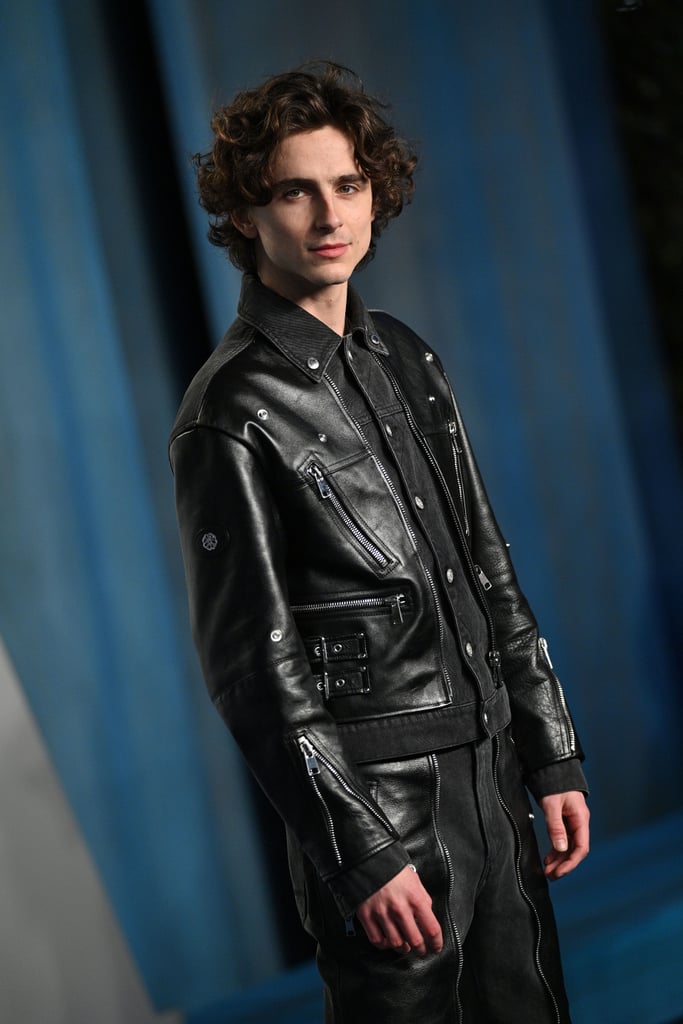 Given his outfit, it wouldn't have been surprising if Timothée Chalamet had pulled up to the Oscars afterparty on a motorcycle. After attending the memorable award show on March 27 in a shirtless suit, the "Dune" star changed into a matching Alexander McQueen biker jacket and jeans for Vanity Fair's annual party. Featuring denim paneling and zipper accents, the leather set made for a sharp entrance and was appropriately paired with equally edgy biker boots.

With this look, Chalamet cosigns the motorcycle-gear trend, which has been spotted on the fall 2022 runways from the designers behind Dior, Balmain, and Blumarine. As the actor demonstrated, the uniform is no longer reserved for motorcycle rides; it can serve as elevated evening attire.

This wasn't the only occasion where Chalamet made a statement in Alexander McQueen. In fact, he has worn the designer on a number of occasions, including during his "Beautiful Boy" press tour in 2018, which included various floral suits by the brand. The two-piece set was a departure from his headline-making Louis Vuitton look earlier in the evening, which consisted of a sequin tuxedo jacket and trousers. The shirtless outfit recalled the sequin harness, also by Louis Vuitton, worn by Chalamet to the 2019 Golden Globes.

Both the award show and its afterparties were rife with style inspiration. Chalamet's "Dune" costar Zendaya wore Sharon Stone-inspired separates by Valentino on the Oscars red carpet; she then attended the afterparty in an hourglass Sportmax suit with a purple button-down. Lori Harvey was another statement-maker, wearing a sculptural Tony Ward dress as she and Michael B. Jordan made their red carpet debut.

Take a closer look at Chalamet's latest style moment ahead.