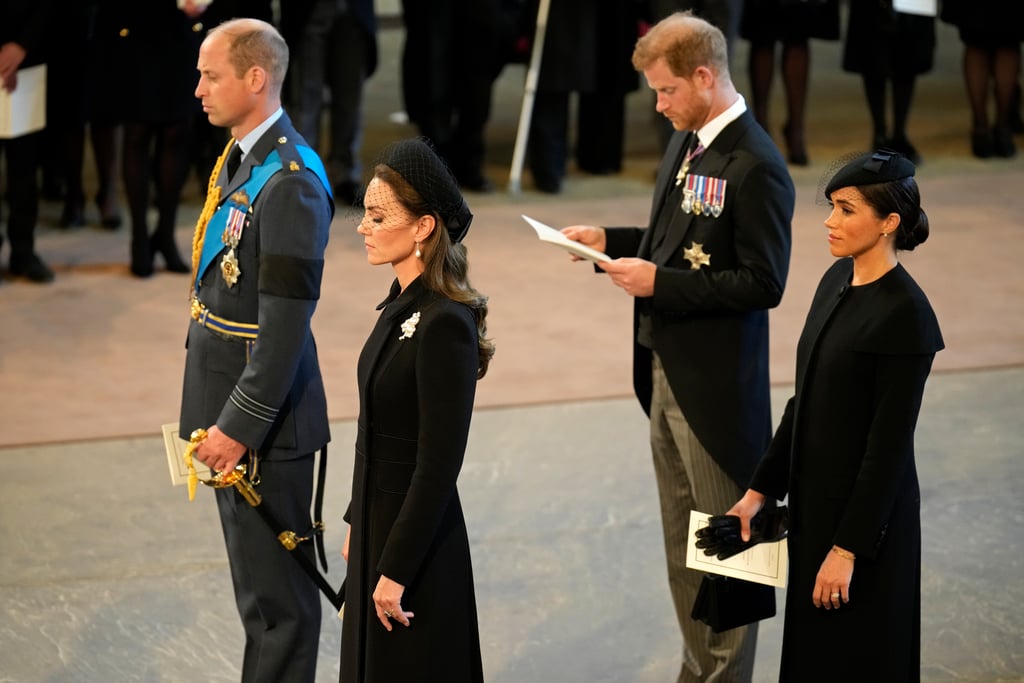 Meghan Markle and Kate Middleton's jewelry paid tribute to Queen Elizabeth II at the late monarch's London service on Wednesday, Sept. 14. Markle and Middleton joined Prince Harry and Prince William at Westminster Hall for the queen's funeral service following a procession of the queen's coffin from Buckingham Palace. As a tribute to Elizabeth, Markle and Middleton each accessorized their all-black ensembles with jewelry that has special ties to the queen.

Markle opted for a bespoke Givenchy black capelet sleeve coat, matching sheer tights, Paul Andrew pumps, a black veiled fascinator hat, black leather gloves, and a Loewe Postal bag. She also accessorized with her gold Cartier Love bracelet, her diamond wedding-ring stack, and a pair of pearl-and-diamond drop earrings originally gifted to her by Queen Elizabeth II during their first solo outing together in June 2018. The memorable trip took place less than one month after Markle married Prince Harry on May 19, 2018. Rarely seen without her pearls, the queen gave Markle a set similar to her own but smaller, and Markle immediately put them on to accessorize her cream Givenchy dress for the occasion. Four years later, Markle's decision to wear the earrings to the London service stands as a sartorial nod to their time together.

Middleton, meanwhile, delivered her own tribute to the queen in the form of a diamond-and-pearl leaf brooch, most famously worn by the queen over a yellow polka-dot dress in Seoul on April 21, 1999. The rarely seen accessory was a meaningful choice for Middleton, who was also spotted wearing the jewelry at the Passchendaele Commemorations in Belgium on July 31, 2017. At both events, Middleton wore a pair of pearl drop earrings previously owned by Princess Diana, making her outfit accoutrements a significant nod to both royals.