Megan Thee Stallion is currently in Japan, embracing the culture by way of fashion. At the 2022 Summer Sonic festival, the 27-year-old rapper performed in a minidress ensemble inspired by popular Japanese manga series "Sailor Moon." Taking the stage to deliver a dynamic and fashion-filled set, she embraced the costume of the main character Usagi Tsukino, otherwise known as Sailor Moon, donning a red, white, and blue schoolgirl uniform.

Consisting of a pleated miniskirt and a white corset top, embellished with a scarlet bow and striped navy neckline, the outfit has all the hallmarks of the iconic look. In a carousel post shared on her Instagram, Megan shared a glimpse of the shoes she wore: white knee-high boots, which perfectly played up the shade of her ivory corseted bodysuit. To finish, her hair — two top buns with curls — also matched the heroine's look, and she accessorized with minimalist diamond studs.

"No like you have no ideaaaa how happy I am in Japan," Megan responded to a retweet that featured her stage costume. She also posted a series of shots on her own Twitter, alongside the caption, "This whole stadium in JAPAN was going UP for me 🥹🥹🥹 you can't fake thee love 💖💖💖 im grateful."

It's clear the star is enjoying her time in Tokyo. Just a few days earlier, she posted about a museum day, for which she wore a striking blue cutout catsuit — just one of the many she's been rocking with the release of her new album, "Traumazine."

Ahead, see all the angles of her latest Japanese anime look. 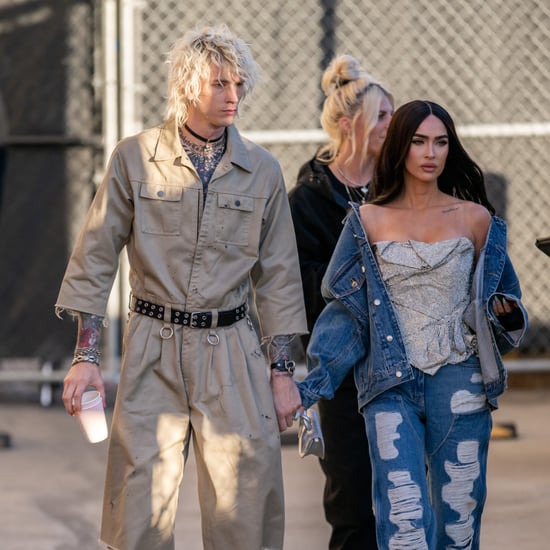