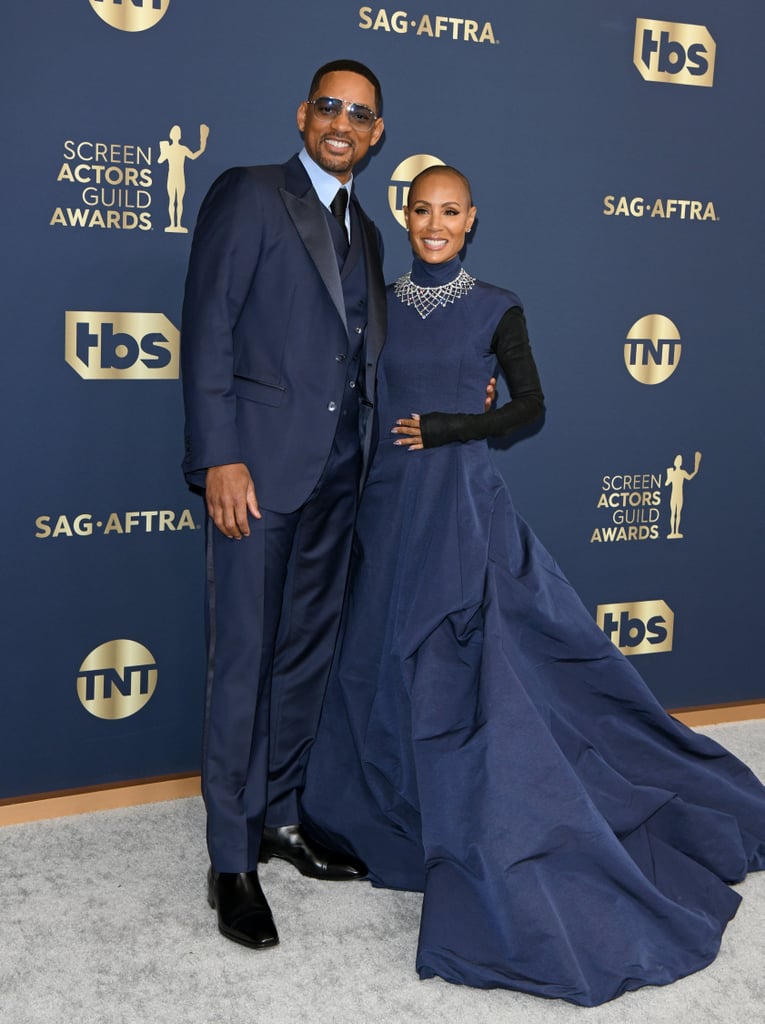 Jada Pinkett Smith has graced many a red carpet over the years, but she still manages to capture our attention time and time again. At Sunday evening's SAG Awards, Jada posed alongside Will Smith, who became a first-time SAG winner for his role as Richard Williams in "King Richard." The Smiths matched in navy-blue ensembles, as the "Red Table Talk" host chose a sleeveless gown with a dramatic skirt, while the film producer wore a dapper three-piece suit.

Jada's dress is from her own collection, a vintage Gareth Pugh piece she "bought a while ago." "I had it in the closet and I was like, 'You know what? I think girl is ready for the SAG Awards,' so I pulled it out," she told Laverne Cox on E's red carpet. She layered the blue gown over a long-sleeve black top and topped off the look with a sparkly diamond necklace and simple stud earrings.

Though the couple's matching moment seemed planned, Will revealed to Extra on the red carpet that their coordination was "serendipitous." Jada added, "This was a mistake; it was a good mistake," while Will joked, "You can't look like the old couple that has a camper and they drive cross-country with their matching sweatsuits. We're not doing that; this was an accident."

The couple's stylish moment comes as no surprise as the Smiths recently made a splash at the Los Angeles premiere of "King Richard" in November. The pair and their kids, Jaden and Willow Smith, looked effortlessly cool in loosely coordinated outfits. Jada wore an ethereal cape dress from Vivienne Westwood, Will wore a blue suit with a funky tie, and Jaden and Willow matched in looks from Jaden's clothing line, MSFTSrep. And at the "Matrix: Resurrections" premiere in December, Jada and Jaden hit the carpet in on-theme outfits: Jada in a red Giambattista Valli gown with a voluminous train, and Jaden in another MSFTSrep outfit.

Jada and Will joined other best dressed celebrities at the SAG Awards, like Ariana DeBose, Elle Fanning, and Lady Gaga. Ahead, see more photos of the pair's matching looks.