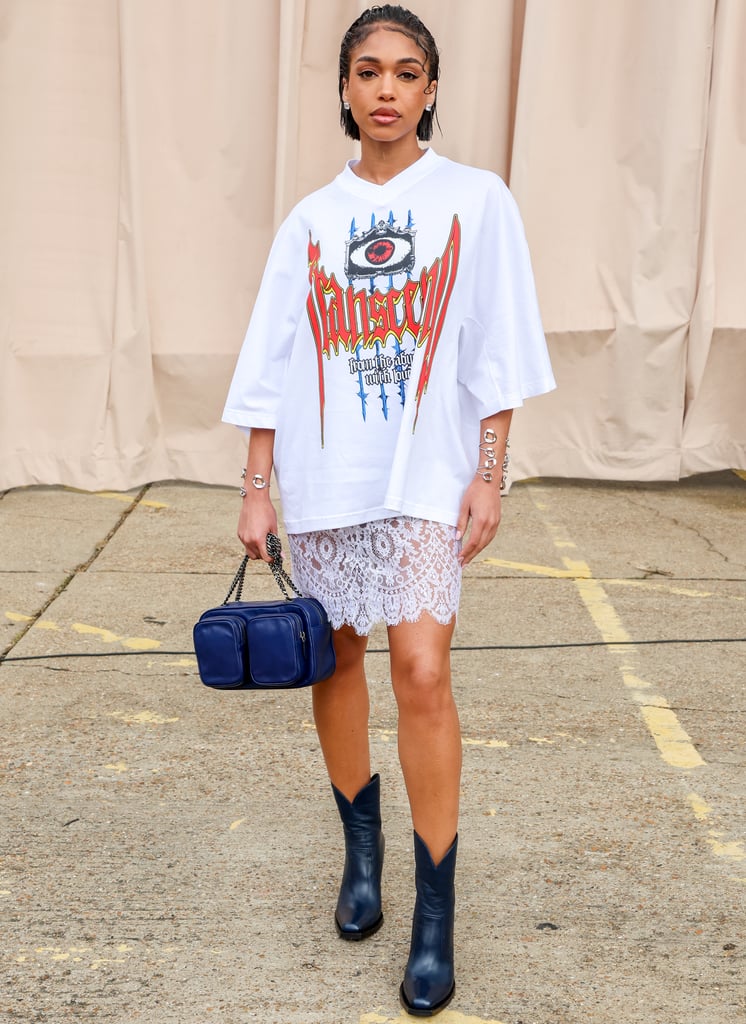 The 25-year-old model and skin-care founder, who also made appearances in New York at Tom Ford, Michael Kors, and Vogue World, styled an oversize graphic tee over a sheer lace skirt, finishing the moment with black Western boots; a navy, rectangular-shaped leather pouch; silver cuffs; and diamond studs. Her makeup included a thick black cat-eye and glossy, persimmon-colored lip, and her hair was slicked back into a wet bob. Harvey's edgy moment turned heads outside of the venue and boasted similar vibes to the sporty glamour she presented by way of her street style earlier on in the month.

Meanwhile, many other Fashion Week guests such as Kim Kardashian, Julia Fox, Normani, La La Anthony, Sydney Sweeney, and Chloe Bailey have been spotted jumping from city to city. And Hollywood newcomers Milly Alcock from "House of the Dragon" as well as "Bridgerton"'s Nicola Coughlan made statements in London.

Notable NYFW attendees included Lil Nas X, who had quite the start to Fashion Month, from walking in his first runway show at Coach to nabbing a chair next to Anna Wintour and Jared Leto at Vogue World. At the latter, the 23-year-old rapper styled a mesh crop top with baggy drop-waist leather pants in a silver metallic finish. Completed simply with sneakers and a matching moto jacket that he wore only when sitting down, Lil Nas X went on to deliver a buzzy performance at the event, which honored the publication's 130th anniversary.

Ahead, see the celebrities who made their presence known so far in eye-catching looks, from New York to Milan.