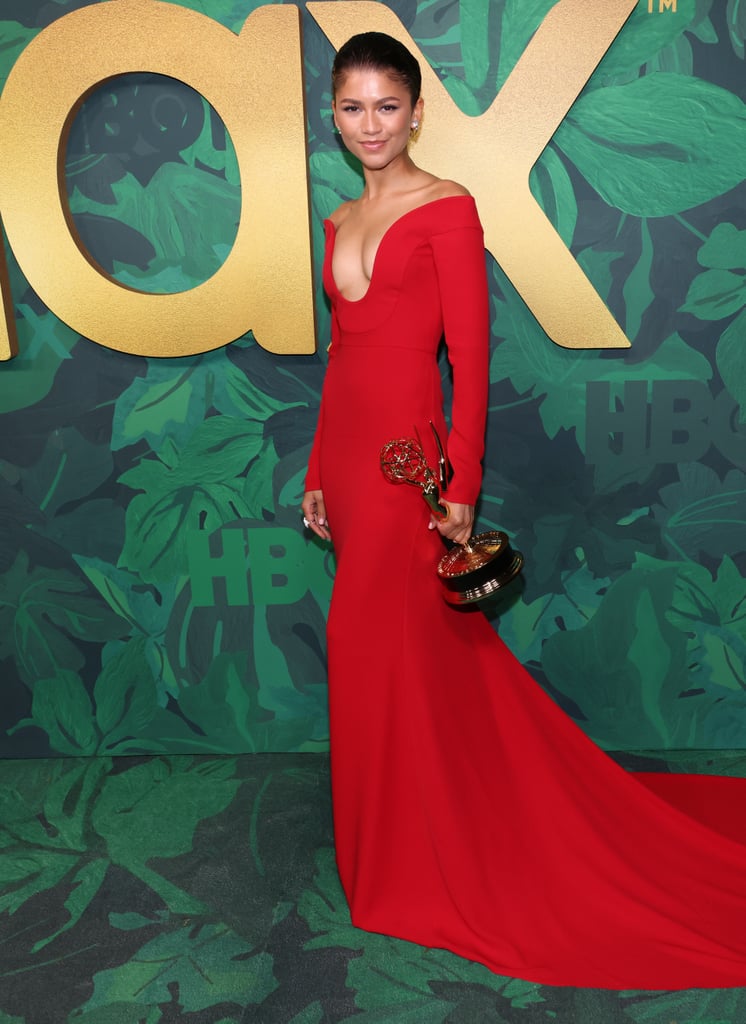 Zendaya at the Emmys Afterparty 2022

After any star-studded award show comes glitzy afterparties, and attendees of this year's Emmys did not disappoint. Stylish first-time nominees and veterans alike graced the red carpet before the ceremony on Sept. 12, then traded their glamorous gowns for more playful and comfortable options at the network parties that followed.

At the HBO party, members of the "Euphoria" cast made a particular splash. It's no surprise Zendaya, now a two-time Emmy winner, was one of the evening's best dressed. Styled by Law Roach, she changed out of her classic black ball gown into a red, off-the-shoulder Valentino dress with a plunging neckline, designed just for her by creative director Pierpaolo Piccioli. Sydney Sweeney did a dramatic 180 from her floral Oscar de la Renta dress and wore a sultry teal Versace number with latex sleeves and several cutouts. Maude Apatow, on the other hand, skipped the ceremony but attended the afterparty in a sleek, champagne-colored corset gown by Vivienne Westwood.

At the Netflix party, attendees like HoYeon, Regina Hall, and Julia Garner, who took home an award that evening, joined other stars of the streamer including Poorna Jagannathan, Lee Rodriguez, and "Selling Sunset"'s Davina Potratz and Chelsea Lazkani. "Squid Game" actor HoYeon slipped into a leather halter top and swing skirt from Louis Vuitton, and Hall wore a pink blazer dress. "Ozark" and "Inventing Anna" star Garner kept her velvet Gucci ensemble for the afterparty.

Ahead, see all the striking party looks ahead, including eye-catching outfits from stars like Issa Rae, Kaley Cuoco, Alexandra Daddario, Mindy Kaling, and more.