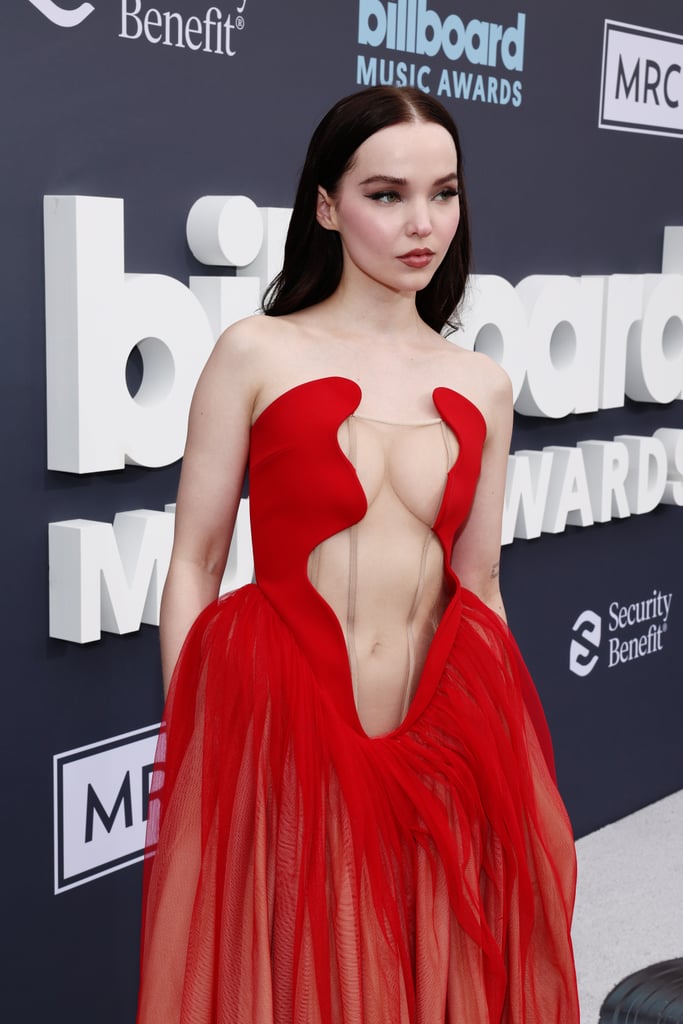 Dove Cameron's scarlet gown at the 2022 Billboard Music Awards brought the "red" to the red carpet tonight. Embracing one of spring's biggest color trends, the actress and singer stunned at the MGM Grand Garden Arena in Las Vegas in an eye-catching Ashlyn dress that would make anyone do a double take. The revealing strapless design opened at the chest to a long, sinuous cutout, exposing her cleavage and torso. Underneath it, a sheer boned bustier appeared barely visible but introduced a new shade to the ensemble. The head-turning top connected to a floor-sweeping, red-and-nude mesh tulle skirt with delicate pleats.

Red dresses are popular choices on the red carpet, but Cameron's style stands out as a truly innovative one. Her whimsical look is from Ashlyn's spring 2022 collection, titled "Capturing the Now." Keeping the focus firmly on the finely draped design, Cameron kept her neck and ears bare, with her wavy hair parted in the middle and cascading past her shoulders.

The "Descendants" star is expected to present during the ceremony, and she surely dressed to wow the audience on stage. Other notable figures in attendance include Megan Fox, Anitta, and Becky G. And with the legendary Diddy hosting the ceremony — plus confirmed performers like Megan Thee Stallion, Travis Scott, and Machine Gun Kelly — this year's Billboard Music Awards will certainly be a memorable fashion affair.

Ahead, capture all the details of Cameron's look.

Music
"The White Lotus": Beatrice Grannò Is a Talented Singer in Real Life, Too
by Victoria Messina 2 days ago