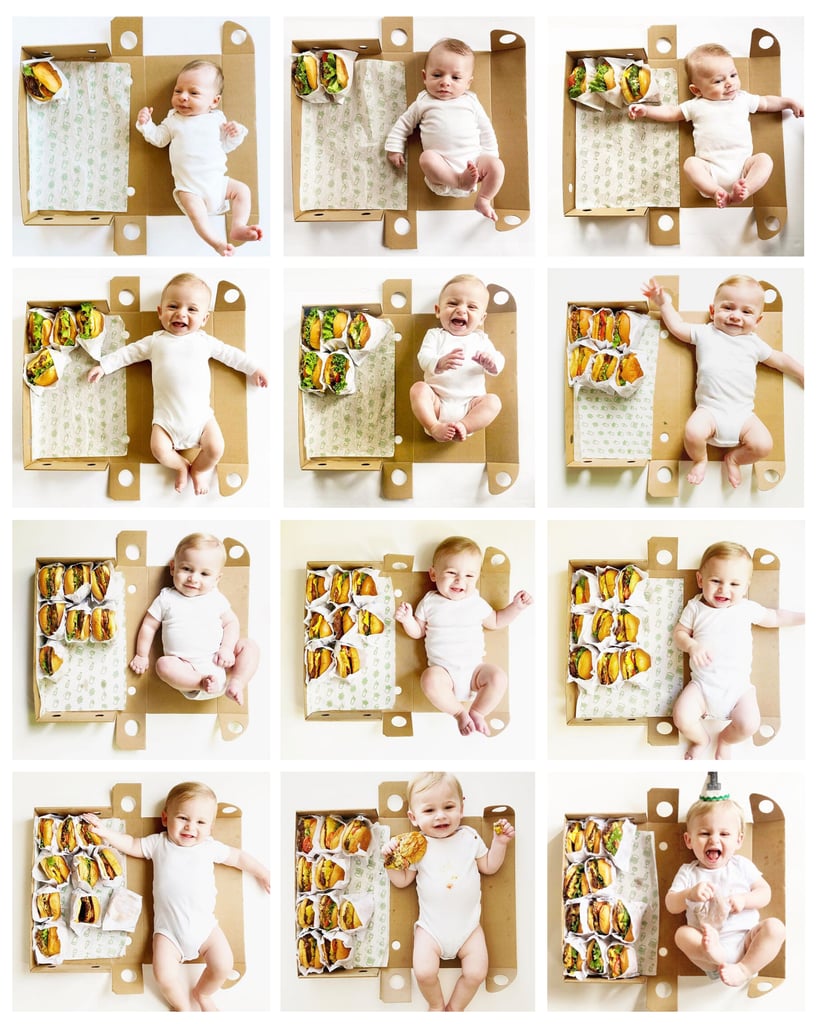 Lindsay Morrison, a mom and pastry chef, cooked up an idea for her son Graham's monthly milestone photos that's bound to give you hunger pangs. Over the last year, Lindsay has snapped photos to document Graham's growth with a Shake Shack theme. After seeing the adorable pictures on Instagram, we touched base with Lindsay to find out where she got her inspiration, and the backstory is . . . hilarious.

"I never ate salty food until I was in pastry school and maxed out on sugar," Lindsay told POPSUGAR. "I had a burger from this place called Salvation Burger (RIP, it closed), and I told my husband I loved it so much I wanted to put a blown-up photo of it above our bed. He said no. I ignored him, putting a photo of his favorite burger on his side of the bed, and the Salvation burger on mine. When we found out I was pregnant, as a joke, we put a picture of a slider above a crib."

Pretty incredible, right? Fortunately, Lindsay's obsession didn't stop there. "The whole situation organically evolved — we called my stomach 'baby burger' — and I had a burger-themed shower. Then when Graham was born, I jokingly called him 'Graham burger' before coming up with 'GraHAMBURGER!' When it was time to do a monthly baby photo, I just didn't see myself doing something cheesy, no pun intended. I'd seen the doughnut baby and pizza baby photos and knew I just HAD to do shoots of my little burger baby!"

"There was actually one day I had to change his diaper in the middle of the shoot, and my DOG ate one of the burgers!"

Judging by the photos, a lot of work went into every shot. Imagine doing a Shake Shack run every single month! "In the beginning, I was like, 'Oh, this is fine!' I had a white presentation board that I'd lay on the floor, get my burger box and just lay him there, shake a rattle, and hope we could get him to crack a smile," Lindsay said. "As time went on, it definitely got more complicated! We moved from Florida to Georgia, and I'm not lying, the burger box and presentation board came in the car with us because I wouldn't let the movers touch it."

Naturally, there was a mishap or two along Lindsay's year-long journey, because kids — and pets — can be hard to wrangle. "There was actually one day I had to change his diaper in the middle of the shoot, and my dog ate one of the burgers!" she said. "I had to go back to Shake Shack and get another one. I cried at the time, but looking back, it's hilarious. Once he started moving, and eating, and there were more and more burgers, it got harder, but also more fun!"

As soon as Lindsay moved to Atlanta, she made the photo shoot an ongoing event with her family. "We'd do a 'burgers for lunch day' at my parents' house," she explained. "I put it on everyone's monthly calendars, and we'd stop and get the burgers on the way over, and my whole family would come over for lunch once we finished the picture. It was definitely a group effort to make him laugh, sit still in the right place, and not grab a burger!"

Staying on theme, Lindsay organized a baby-burger-themed birthday party when Graham turned 1. And given her experience as a pastry chef, all of the treats looked absolutely amazing. Scroll through to get a look at Graham's sweet savory milestones.

Related:
This Mom Documented Her Baby's First Year in Pizza Slices — How She Chose the Toppings Is Hilarious
Previous Next Start Slideshow
BabiesPhotographyShake ShackBurgers

Babies
Why Are Preterm Births on the Rise in the US?
by Melanie Whyte 2 weeks ago

Nick Cannon
Nick Cannon Celebrates the Birth of His Daughter With LaNisha Cole, His Ninth Child
by Chandler Plante 9/15

Family Life
Are You a New Parent? You Need to Know About Parechovirus
by Melanie Whyte 7/20