Kids always say the darndest things! Mario Lopez learned that the (hilariously) hard way when he brought his children, 4-year-old Dominic and 7-year-old Gia Francesca, on the red carpet to the 2018 Father of the Year Awards, where he was honored, and they revealed a little too much about their dad. During their family interview, with Mario's wife and the kids' mom, Courtney Laine Mazza, Dominic and Gia shared their favorite things about the actor, including his "jokes" and that he'll wrestle with them. Sweet, right?

Well, not so fast. After the kids adorably listed their father's positive attributes, Gia quickly jumped in to what she "hates" about her dad, mainly that he'll try to fart on them when he wrestles. Yep, you read that right. She switched gears straight to g-a-s. Dominic yelled his agreement while Mario rolled his eyes and Courtney laughed in the background. Hey, you really can't control what kids will say, and at least they're being honest! Watch the video above to see the whole revealing interview go down, and then keep reading to see even more silly photos from the family's night out. 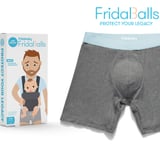 These Kid-Proof Briefs For Men Are Made to Protect the Family Jewels — and No, We're Not Kidding
Previous Next Start Slideshow
FatherhoodMario LopezCelebrity FamiliesHumor

Celebrity Instagrams
Britney Spears Celebrates Her Birthday by Posting a Tribute to Her Sister, Jamie Lynn Spears
by Sabienna Bowman 4 days ago

Nick Cannon
Nick Cannon Jokes About Christmas Shopping For His "Big-Ass Family": "Hell of a Lot of Gifts to Buy"
by Njera Perkins 5 days ago