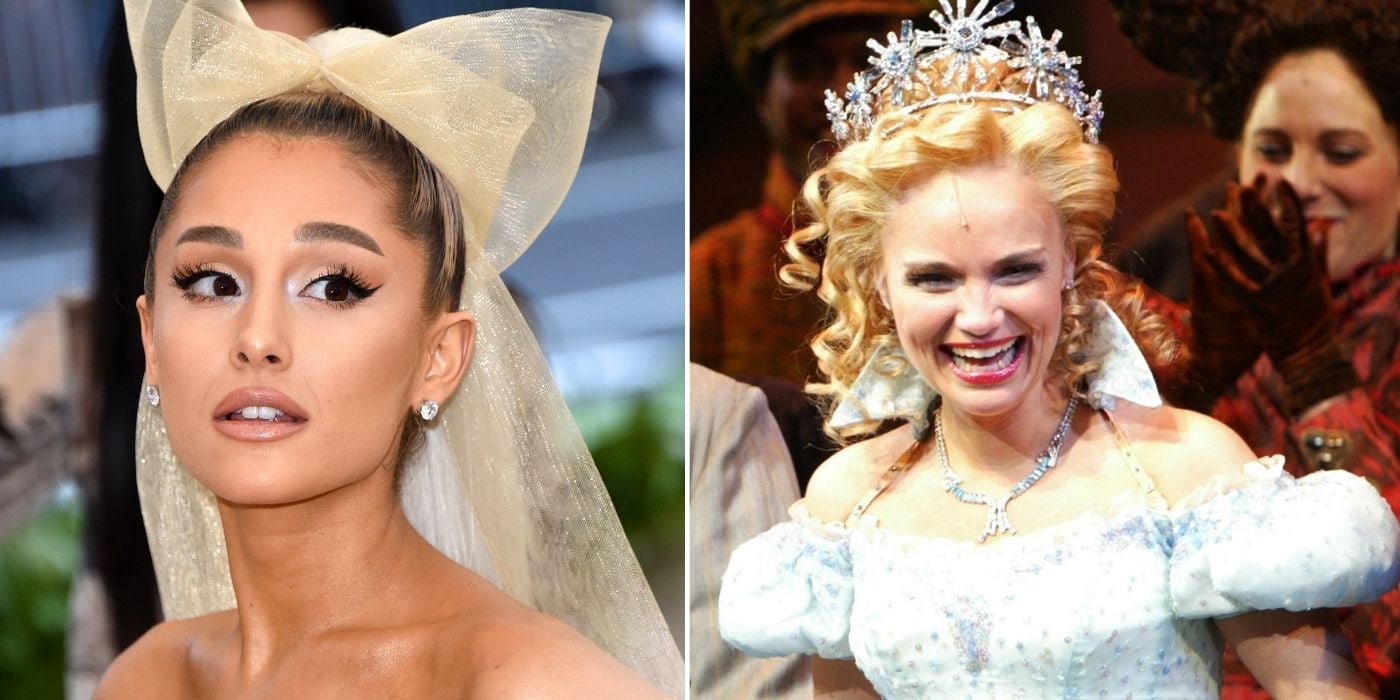 At long last, the big-screen adaptation of Wicked has found its Glinda and Elphaba in Ariana Grande and Cynthia Erivo, respectively. At this early stage, the Jon M. Chu-directed film doesn't have a release date, but with the leading ladies finally in place, it feels like Wicked fans are one step closer to finally seeing a movie version of the beloved book and Broadway show. In the case of Grande, stepping into Kristin Chenoweth's shoes as Glinda, the Good Witch, is a dream come true. Shortly after her casting was announced, Chenoweth shared the Grammy Award-winning artist's 2011 tweet in which Grande revealed how badly she wanted to play Glinda someday in a congratulations post on Instagram.

It seems Grande's time has finally come, and now all that's left is to see how she puts her unique spin on the role of the Good Witch. Although the character is inspired by Glinda from L. Frank Baum's classic Land of Oz book series, as well as the 1939 film The Wizard of Oz, Wicked the movie is an adaptation of the Tony Award-winning Broadway play and Gregory Maguire's 1995 book Wicked: The Life and Times of the Wicked Witch of the West. As a result, Grande has no shortage of backstory to draw on as she sets about making Glinda her own.

Glinda Gets a Complex Update in Maguire's Book Wicked

In his 1995 novel, Maguire reimagines the world of Oz as a politically charged environment plagued by discrimination and a corrupt governing body. As someone born with green skin, Elphaba is all too aware of how people who don't fit the norm in Oz are treated. By contrast, Glinda, known as Galinda at the start of the book, is a popular university student from a wealthy and well-respected family. Because she's so used to living within an insular bubble of privilege, she is shocked when she ends up with Elphaba as a roommate.

At first, Glinda ignores Elphaba and even joins in with their classmates when they ridicule her. However, the longer the two share the same space, the harder it becomes to keep up their antagonistic relationship. Over time, she begins to see the hypocrisy that exists at their university, Shiz, and in the world beyond. By the time their professor, Doctor Dillamond — a talking goat — is murdered, Glinda's eyes are fully open, and she symbolically changes her name from Galinda to Glinda (the name the Doctor mistakenly called her) to illustrate her commitment to bringing about a positive change in Oz.

From that point forward, Glinda and Elphaba's friendship is solidified. Soon, she and Elphaba are pursuing careers in sorcery and invited to visit Emerald City to meet the Wizard. Unfortunately, the visit is underwhelming, but Glinda remains undeterred from her goals, while Elphaba is so disillusioned, she decides not to return to Shiz. This leaves Glinda to take on a big-sister role toward Elphaba's little sister, Nessarose, who is tragically killed when Dorothy Gale's house falls on top of her.

Knowing her friend won't rest until she finds out who killed her sister, Glinda gifts Dorothy with Nessarose's slippers, which she casts a protection spell on, and sends her on a quest to find the Wizard. Before Nessarose's funeral, Glinda tells Elphaba about the circumstances surrounding her sister's death, including how Glinda gave Dorothy the magic slippers, which leads to a rift from which they never recover, as Elphaba's quest for justice ultimately leads to her death. This leaves Glinda alone to continue her quest to change Oz for the better.

The Broadway Version of Glinda

As you can tell from above, Maguire's book is pretty bleak, which means Glinda — and all of the other characters — are much darker on the page. By contrast, the Broadway musical is an altogether brighter version of the tale, with a spunky Glinda to match. While several actors have taken on the role since the musical debuted in 2003, Chenoweth originated the role and infused Glinda with a vibrant, joyful energy that makes her likable even when she's being a total snob at the start of the story.

Glinda is deeply jealous of Elphaba's superior magic abilities in the musical, and that's the biggest roadblock standing between the two opposites becoming friends. It's not until Elphaba shows up at a school dance wearing a witch's hat that Glinda gave her as a prank that the Shiz University students form a real bond. At the same party, Glinda learns Elphaba recommended her to join her sorcery class, which prompts the future Good Witch to step up and dance with Elphaba. From then on, she makes it her mission to make her new friend popular, too.

Things become complicated when a trip to Emerald City goes awry, leaving the Wizard to appoint Glinda as the "Good Witch" who can defeat the "Wicked Witch" Elphaba. But for her part, Glinda still believes in her friend and tries to save her from the mob mentality of Oz. Ultimately, Elphaba does survive in the musical, but Glinda never knows her friend's true fate. So instead, she tells Elphaba's story and banishes the Wizard from Oz after learning of his duplicitous nature, leading to her becoming the good witch she was always meant to be.