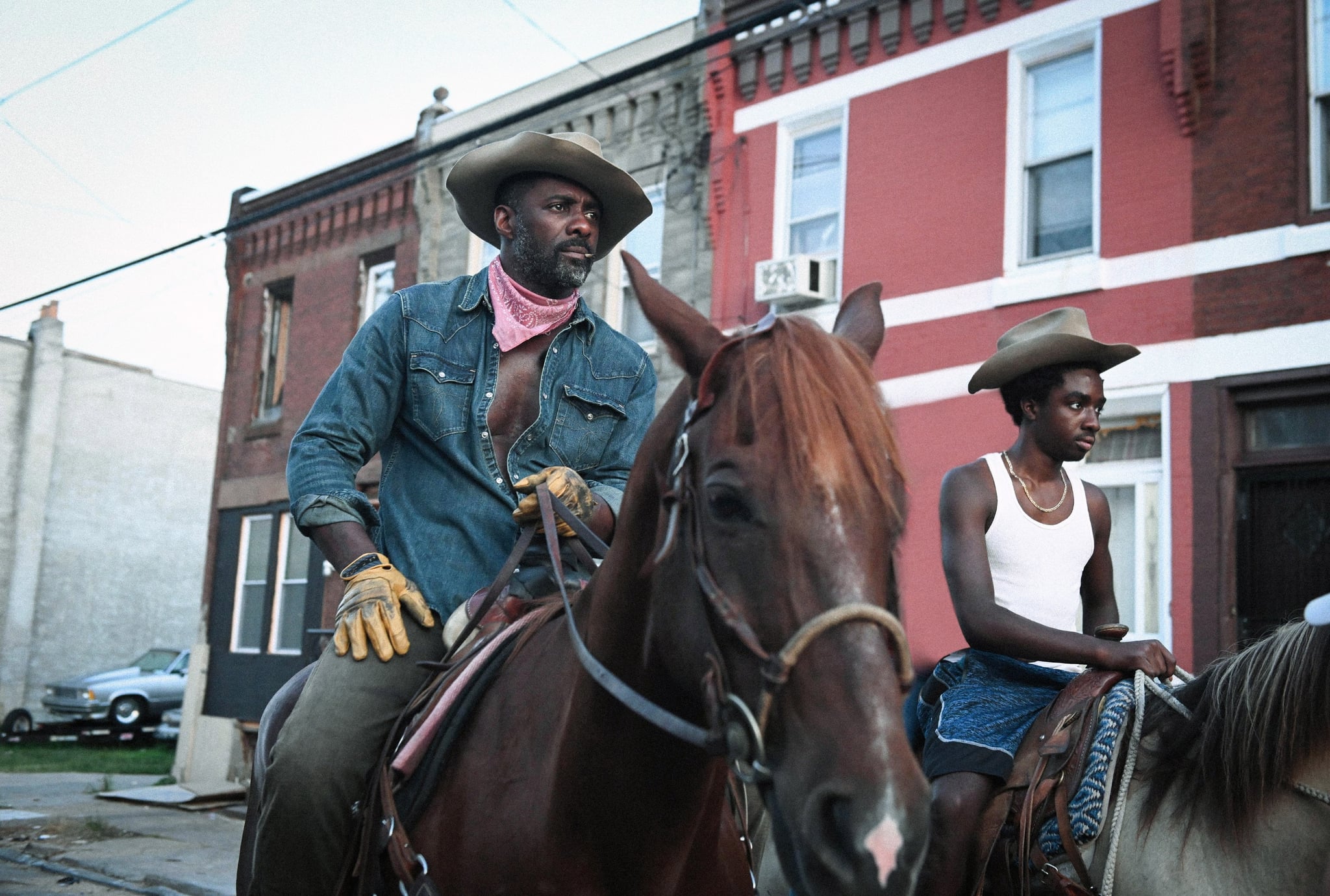 Hollywood has long fostered a love affair with Westerns and cowboys, but traditionally the depiction of cowboys has been white — insert John Wayne, Clint Eastwood, and countless other white actors. However, Netflix's Concrete Cowboy brings the story of "urban" Black cowboys to life, shining a light on the significance of Black cowboy culture, a narrative rarely seen on screen, as well as Black fatherhood. The new film centers on the Fletcher Street Urban Riding Club, a community of Black cowboys that has existed in the North Philadelphia area for over a century. The story is told through the lens of father and son duo, Harp (Idris Elba) and Cole (Caleb McLaughlin), who are at odds with each other but find common ground through their shared love of horses.

The last time Black cowboys were the subject of their own movie was Mario Van Peebles's 1993 film Posse. To understand why Black cowboys are rarely seen on screen, we have to go back to early Hollywood. Western films were hugely popular in the early 20th century and were responsible for the whitewashing of America's perception of cowboys, even though historians estimate that one in four cowboys were Black. These narratives erased any semblance of public awareness of Black cowboys, despite the existence of real, prominent Black cowboys, such as the all-Black unit Buffalo Soldiers, or Bass Reeves, who is the real-life inspiration for the fictional character Lone Ranger.

Within the cultural heritage of Black cowboys are meaningful aspects of Black history and identity. These are stories filled with pride, joy, determination, and rich, familial traditions that have been passed down through generations. These are stories that have survived enslavement, Jim Crow, racial trauma, discrimination, institutionalized racism, and rampant gentrification — why don't we see them in pop culture?

What is most compelling about Concrete Cowboy is its focus on Black fatherhood, something rarely brought to the forefront on television or film. When Black fatherhood is explored, writers frequently default to negative stereotypes and tropes that play into the myth of the absent Black father, even though Black fatherhood is enduring, as Black fathers are an involved and defining presence in the lives of their children. Concrete Cowboy depicts Black fatherhood from the vantage point of authenticity, vulnerability, and tough love (think Black dad extraordinaire Furious Styles, Boyz n the Hood), evidenced in the exchange of tears, laughter, and other tender moments such as Harp (Elba) admitting his shortcomings as a father, or in telling Cole (McLaughlin) the story of why he chose to name him after John Coltrane. Through horsemanship, the two mend their relationship and join forces to fight for the horses, the land, and for the tight-knit community of urban Black cowboys they hold so dear.

Concrete Cowboy making it to the screen is a step in the right direction for the representation and visibility of Black cowboys in TV, film, and in real life. Hopefully, the film will spark viewers to learn more about the journey of Black cowboys throughout history, as well as the many thriving Black equestrian communities that remain across US cities today.

A powerful scene toward the end of the film shows the Fletcher Street Urban Riding Club mounted on their horses, taking a final ride, and Harp (Elba) says passionately, "Home ain't a place, it's a fam. That's what makes us cowboys." This moment is one that exemplifies the strength and perseverance of Black cowboys and their influence on Black identity and culture.

Although, Black Cowboys have been erased from both America's memory and imagination, the resilience of Black cowboys lives on, leaving a legacy for future generations to admire, respect, and, most importantly, to advocate for the preservation and recognition of the contributions of Black Cowboys.