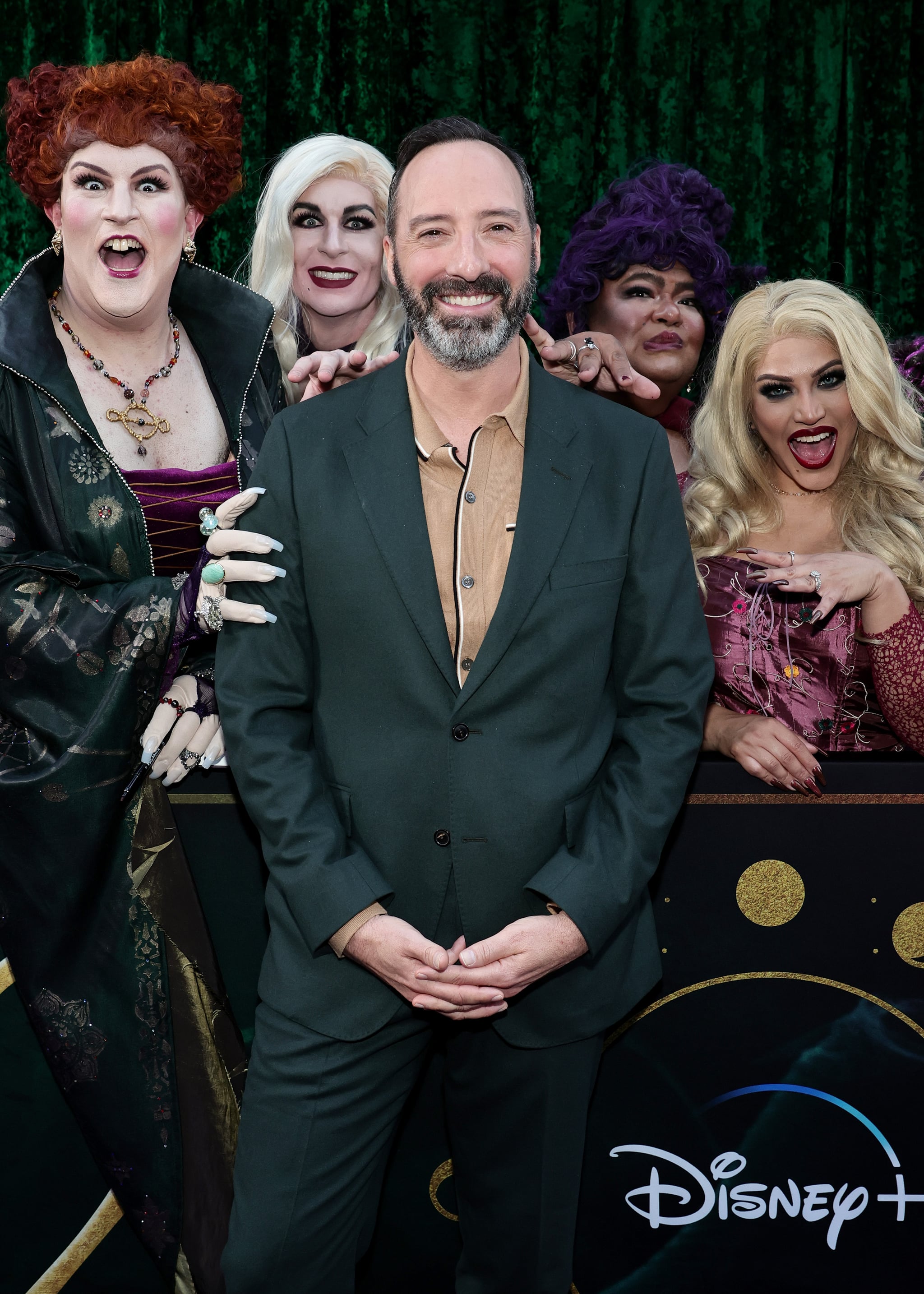 When POPSUGAR recently chatted with Emmy winner Tony Hale, the actor hadn't yet seen "Hocus Pocus 2." He was also sworn to some modicum of secrecy around the highly anticipated sequel's plot ("I'm afraid Disney's going to come and just pummel me," he joked) but still assured, "It's got the musical numbers, it's just got the camp, it's got the fun spells."

The original 1993 film starring Bette Midler, Sarah Jessica Parker, and Kathy Najimy as three inadvertently resurrected witches wreaking havoc on spooky epicenter Salem, MA, wasn't an immediate success. In fact, it took years for the movie to build up an almost cult-like following. And with those years, demand for a sequel grew. Now, nearly three decades later, the witches are back in Salem for a new adventure when "Hocus Pocus 2" hits Disney+ on Friday, Sept. 30.

Like much of its audience, Hale says he was a "late bloomer" to discovering the charm of the first "Hocus Pocus." The actor tells POPSUGAR during an interview about his partnership with AstraZeneca, "This whole idea of comedy and music associated with Halloween and the scary was . . . I mean, I kind of wish I had that when I was younger."

The sequel's executive producer Adam Shankman brought Hale on board for the movie, he says. In it, he plays Salem's mayor, as well as a character in a flashback scene. That's all he can really divulge, he says, but promises, "It was just fun, really fun."

Related:
16 Movies Just as Quirky and Spooky as Hocus Pocus

Part of the enjoyment of the filming process for Hale was a reunion of sorts with Najimy, a friendship developed while both appeared on hit HBO series "Veep" — he as President Selina Meyer's long-suffering assistant Gary Walsh, and she as political aide Mike McLintock's reporter wife, Wendy. "We really became friends over the years," Hale says, adding, "That's what always makes it kind of life-giving, where you're just hanging out with friends." And, of course, he was thrilled to work with Parker and Midler (who, he says, is a "full-on icon").

Of course, there are nerves about living up to fan expectations, Hale admits. But he has high hopes. He's also keeping busy until the streaming debut: he hit the New York City premiere on Sept. 27, and he's also focused on the launch of biopharmaceutical company AstraZeneca's new Asthma Behaving Badly website and campaign. It's geared toward busting misconceptions about asthma, which Hale has dealt with since his youth.

"It's not a one-size-fits-all thing," Hale tells POPSUGAR. "There are so many different types of asthma, and when I was growing up, there was not the resources that there are now. So, being able to work with AstraZeneca and kind of bring awareness and, hopefully, empathy to the situation is really special to me."

The educational campaign — which encompasses a website and, eventually, digital and social channels — will help Americans living with asthma understand how to best control it in its various forms, like eosinophilic asthma. "I think there is so much information, and to be able to narrow it down and get to a central place like this website I think is just so valuable, honestly," Hale says.