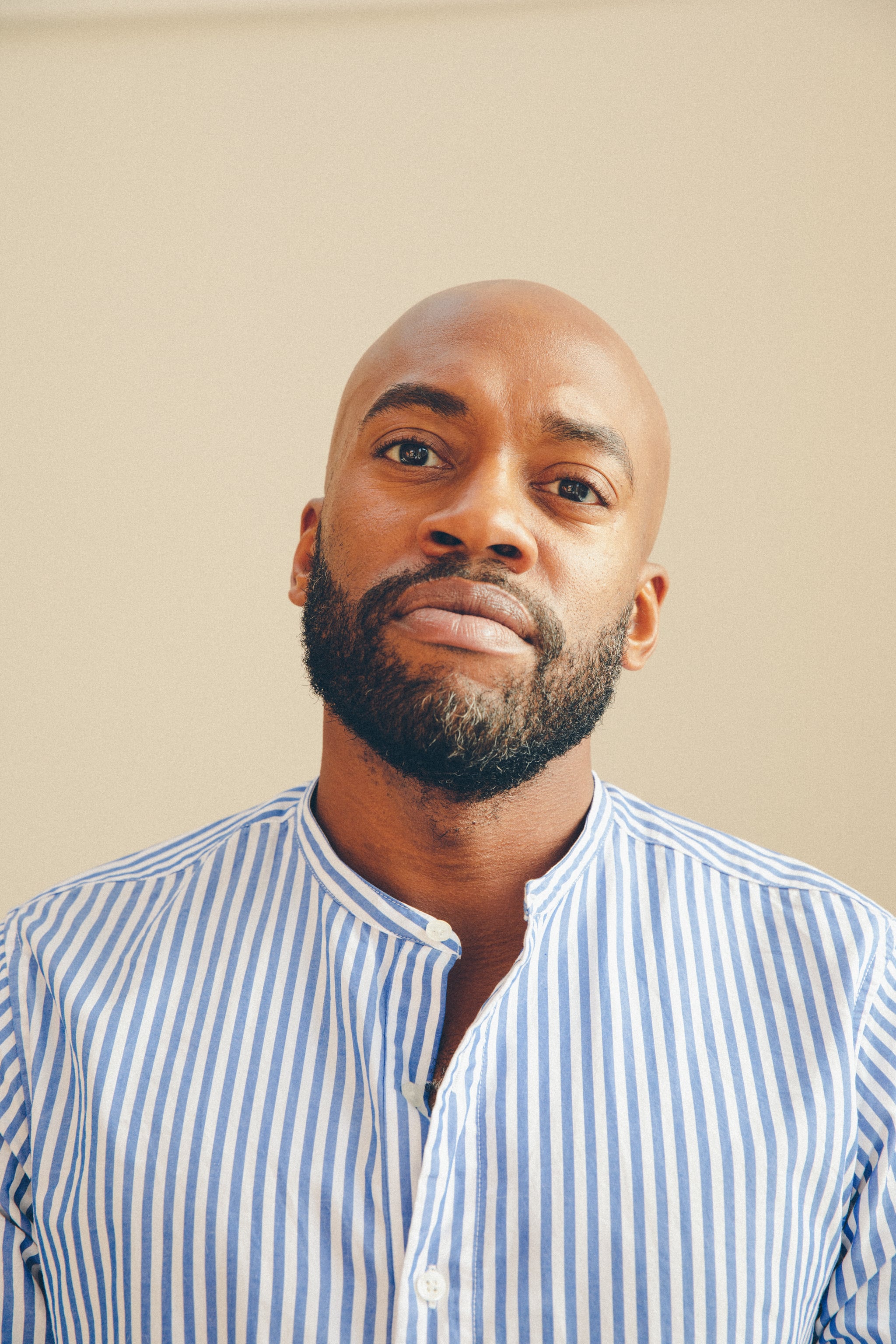 If it's happening in pop culture, Sam Sanders wants to talk about it. This summer, Sanders launched Vulture's newest podcast, "Into It," which, as Sanders tells POPSUGAR, is about "the pop culture that we're obsessed with, the pop culture we can't stop thinking about."

"You can think of it as a weekly digest of all the stuff in the zeitgeist, but also some really interesting deep dives into all the nooks and crannies and deep parts of popular culture," he explains. "We can talk about everything from the business of being Beyoncé to why no one ever seems to want to end a show these days to the racial politics of 'Yellowstone' to which celebrity alcohol tastes the best."

He describes the list of topics as "well-rounded" and says the show's biggest asset is the rest of the Vulture team, whom he calls "the best and the brightest." Sanders, a radio and podcasting vet, opens up to POPSUGAR about his new project, his years-long career, and his predictions for what's next in the pop culture landscape.

POPSUGAR: What attracted you to podcasting and radio, and how did you get your start in it?

Sam Sanders: Audio, whether it be radio or podcasting, always felt incredibly personal to me because it's the kind of thing that you can have with you all throughout your day, no matter what you're doing. When I'm playing a podcast, I can do anything. I can be folding laundry, cleaning my house, walking the dog. I've had people tell me for years that they'll listen to my podcast while they train for marathons. To be able to be with people as they go about their day makes the entire medium itself so much more intimate.

PS: You went from "NPR Politics" to "It's Been a Minute," which is a hybrid of politics and pop culture, to now "Into It," which is all pop culture. How did that evolution happen for you?

SS: A lot of it was really organic. What was I into talking about? What questions did I have myself as a consumer of news and culture? And what gaps did I see in the industry? So before I covered politics, I hadn't covered politics and it felt like a good time to do it. I was really interested in trying to cover politics in a way that would seem accessible to all of my friends, and that was the goal with the "NPR Politics" podcast and my coverage of [the 2016 presidential] campaign. And I think it worked.

Then, like a lot of people, election 2016 wore me out and I needed something different, but I wanted to continue to do what I had gotten good at. With "It's Been a Minute," I got this space to still do news, still do politics, but just spread my wings and experiment. We realized pretty early on in the show that one of our sweet spots were long-form interviews with creatives and also conversations that just unpacked the ways in which the news intersects with identity, whether it be race or gender or sexuality or class.

PS: How does "Into It" dive into those ideas through pop culture?

SS: We had a conversation a few weeks ago on the show about "Yellowstone," this show that people can't figure out if it's conservative or what and it represents a lot of the tensions between coastal America and middle America and the entertainment industry. Through this chat about a f*cking Kevin Costner show, we're able to look at race, class, identity, and politics and have these conversations that connect the dots in some really cool ways. And that's what I was doing when I was covering politics, right? They're still meaty conversations.

PS: Can you preview any upcoming episodes?

SS: We have a really interesting episode coming up all about how abortion is portrayed on screen. There's this idea that, "Well, you know, TV and movies can move the needle, and if people see more abortion or see more interracial couples or see more gay couples, we'll get politics that is nicer to those people." In actuality, we have seen more abortions portrayed on screen than ever before as abortion laws across the country have become more restrictive. We're talking to a writer who's written abortion into her TV show and to an academic who has studied the way that this stuff is portrayed on screen and we're going to air it in October. It's going to be something that's timely as a culture story and timely as a political story because Roe is ostensibly on the ballot this year.

We're also trying to figure out how to have a conversation about the meaning of Taylor Swift upon the release of her new album. I admit, I'm not as big of a Taylor Swift fan as a lot of other folks in Vulture, but I want to have that conversation. There's something that the trajectory of Taylor's presentation of self over the course of her career says about what we think it means to be a woman. I don't want to get it wrong because I'm not a woman, but we're trying to have it, so stay tuned for that.

PS: Who's the most memorable person that you've interviewed?

SS: I really loved talking with Damon Lindelof. He was such a nice, down-to-earth kind of guy, and I've been watching his stuff for years and his thoughts about the state of the industry, I found fascinating. And Kara Swisher and I got to interview Issa Rae at the Code Conference about a week ago, and that was just delightful. She's one of my heroes in the biz.

And honestly, I just love talking with Vulture folks. There's a crew of Vulture people that did a really fun segment with me a few weeks ago on the show where we all just tried celebrity alcohol in the office during the middle of the day on a Tuesday, and they were so down to clown and so smart and so funny.

PS: What are the pop culture things that you love right now?

SS: I am obsessed with watching the shakeout of the streaming industry. For a while, we were in this moment that seemed very Wild, Wild West. Endless expansion. Streaming would never die. There'd be more and more platforms with more and more people and the limit did not exist — especially during the pandemic. Last year, there were over 500 scripted shows. 500 scripted shows plus, not even counting reality TV, not even counting docuseries, and now we're in this moment where everyone is saying, "There is too much TV."

You're going to see consolidation, you're going to see some shows be pulled off, you're going to see some of these streamers go back to things that feel like cable as in bundling or regular set times for shows to air each week, and there's going to be a great resettling. And while I'm not eager to see that, because that's going to cost people jobs, I am interested, from a business standpoint, as to what that looks like because I think it's very easy to talk about popular culture as a fun culture story, but it's also a business. Streaming and TV, these are billion-dollar industries, right? I'm obsessed with that.

PS: Is there anything right now that you think people aren't talking about but should be?

SS: I think anybody, any streamer, any movie maker, any maker of creative stuff, whether you're making music or TV or movies, if you can make the process easier for me to find it, I'm more likely to do it. Tell me when to watch and how to watch and where to watch. Tell me what to look at. Help me wade through this ocean of content. The platforms and companies and artists that get that right, they will win.

PS: Is there anything you think is on the way out?

SS: I think the idea of brand loyalty when it comes to platforms is over. I can't even remember what platforms I watch stuff on these days. Was it Hulu? Was it Showtime? Was it Peacock? I don't know. I like the show. The average consumer doesn't care. You don't have Netflix stans, you don't have Hulu stans, you don't have Spotify stans. You have people who want consume stuff and the ones who make it the easiest to consume, they will win. How do these brands compete in that kind of marketplace?

PS: What's the most surprising thing you've seen pop up in the last year?

SS: The continued dominance of TikTok. It will not go away. I think everybody was worried about China being involved, Trump was going to shut it down, then the thought was that someone else would acquire them, and then Instagram has tried to just become TikTok. It doesn't work. TikTok is winning, and I think it's here to stay, and I probably wouldn't have said that a year or two ago, but they really did it. It's fun, too. When I spend time on Twitter, I end up sad and angry, but when I spend time on TikTok, I'm happy at the end of it.

PS: Do you have any shows or movies you're really looking forward to before the end of the year?

SS: The new season of "The White Lotus" is going to be to die for. I'm always thinking about which HBO/HBO Max show I'm obsessed with the most, and it goes back and forth. For a while it was "Succession," but the thing that I found with "Succession" is that there's actually no action. Until the dad goes away, they'll just be circling each other and nothing will ever really change. "The White Lotus" gives you plot, and to make this show have some connective tissue from the first season to the next, but also have it be a whole new setting with new plot, I think it's a recipe for fall success.