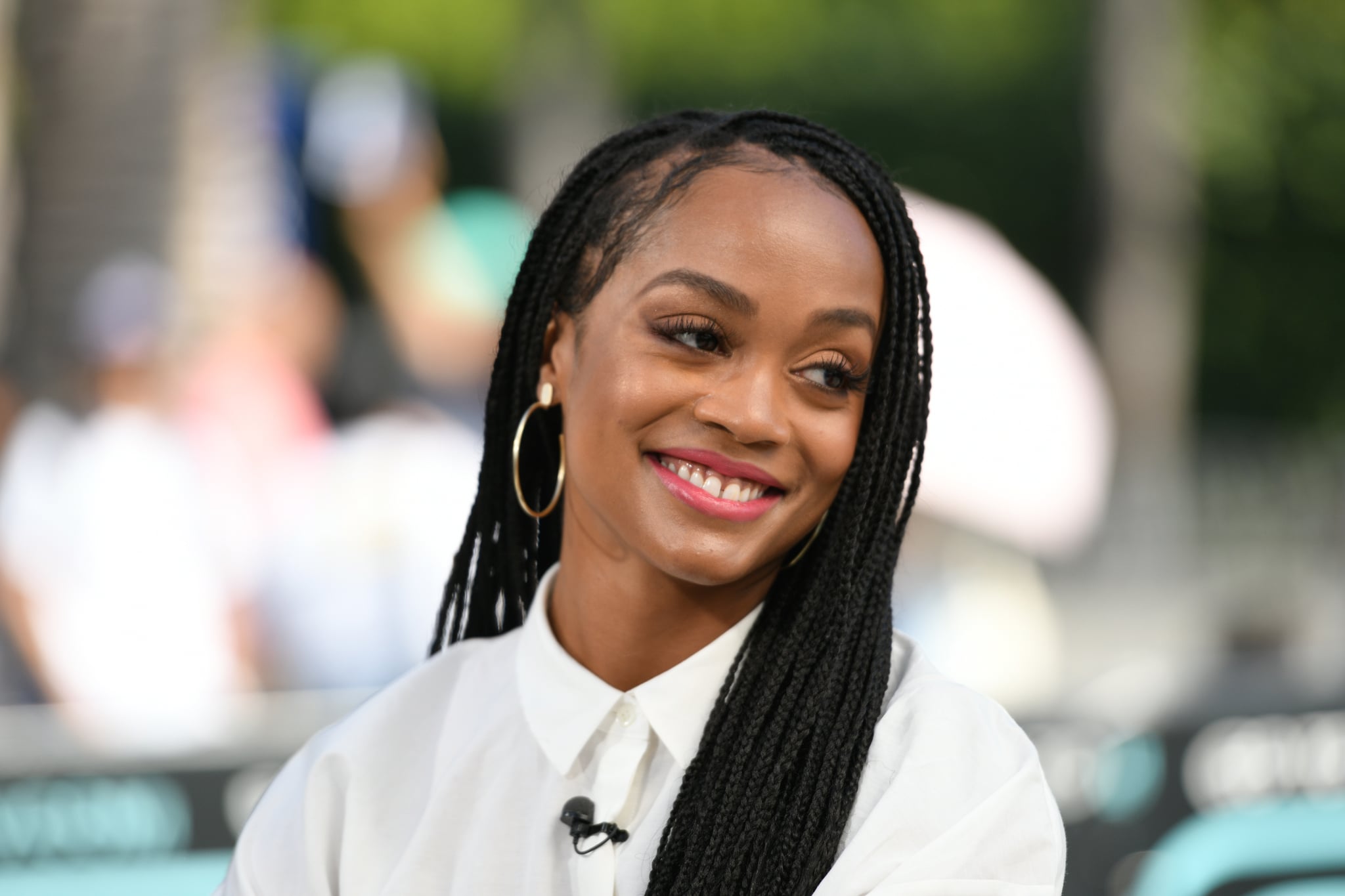 If one could imagine a physical manifestation of the Bachelor franchise at the moment, it would be a tornado that lasts several minutes, in which everyone loses their mind before it dies down, and people drag the dredges left to piece together a sense of normality and pretend nothing ever happened. At least that's what it seems like the fans want, as they react to the controversy surrounding the current season of The Bachelor by lashing out and harassing the very people they should be listening to. Namely, Rachel Lindsay, who remains the only Black Bachelorette in the franchise's history and the first-ever Black lead, is constantly speaking out about the ways the franchise fails its viewers and contestants. Her tireless campaign to make the franchise do better for its members has bolstered fans to organize for change, paved the way for more diverse casting and nuanced conversations happening onscreen that we never saw before she joined the franchise. In return, Rachel regularly faces the hostility of the very people she aims to educate, so much so that she's deleted her Instagram account due to harassment and hate she has received from Bachelor Nation.

Related:
The Bachelor Taps Emmanuel Acho to Replace Chris Harrison For After the Final Rose Special

On Friday, Feb. 26, Rachel's Higher Learning podcast cohost Van Lathan took to Instagram to confirm that she deactivated her account and condemned the attacks on the former Bachelorette. "She did it because that's how much hate she's getting from Bachelor fans, who are spamming her with all kinds of rude, hateful things to say," he revealed.

Rachel has often drawn ire for speaking out against the Bachelor franchise's missteps and being frank about her opinions on other Nation contestants, such as her "feud" with former Bachelor Colton Underwood before his split from Cassie Randolph in May 2020. During the "Women Tell All" special from the previous Bachelor season, Rachel called out the hatred that she and other contestants face online, including death threats, name-calling, and racial slurs. "I know how uncomfortable it is for you to see. Just imagine how uncomfortable it is to get this in your comments and your DMs every day, every week, every month," she said through tears. "And that's just a tip of the iceberg."

Nearly a year later, the latest onslaught of toxicity stems from the controversy surrounding long-time host Chris Harrison and current Bachelor contestant Rachael Kirkconnell. The former announced he was temporarily stepping down from his hosting duties in the wake of his Feb. 9 interview with Rachel for Extra to discuss the accusations of racism against (rumored front runner) Kirkconnell. The 24-year-old was accused of multiple instances of racism before her appearance on the dating show. But the final straw came when photos surfaced of Kirkconnell participating in an antebellum plantation-themed formal in 2018. In the pictures, she's wearing an antebellum-style gown, perpetuating the tropes and aesthetics of the slave-owning Antebellum South.

"We weren't looking through those lens and we should have been." — Rachel Lindsay

Harrison went on Extra to discuss the controversy and Kirkconnell's then-kept silence, but the interview soon proved that the contestant apple didn't fall far from the host tree. Harrison launched into a tirade in defense of the season's front runner, speaking over Lindsay, bemoaning the gripes of the "woke police," and telling viewers they needed to have "a little grace, a little understanding, a little compassion" when it comes to Kirkconnell. At one point, he asked Lindsay if Kirkconnell's actions from 2018 are wrong or if they simply aren't "a good look" through the 2021 lens. The Extra host pointed out that racist-themed parties aren't a good look ever. She went on to say that Harrison's line of thinking is part of the problem and that "we weren't looking through those lens and we should have been. And just because it was a popular party, you know, doesn't necessarily make it right."

The backlash against Harrison from the interview prompted him to apologize for "wrongly speaking in a manner that perpetuates racism" and announce he was "stepping aside" from the show for a time. Kirkconnell posted her apology on Instagram soon after the interview aired, and Matt James followed with his thoughts on Feb. 22. Bachelor contestants, both new and old, spoke out against Harrison's actions, calling for change in the franchise that became their home. Yet no one seemed to face the same contempt that Lindsay did — a fact that she predicted. On Feb. 10, Lindsay responded to a tweet from HuffPost senior reporter Emma Gray calling out Harrison, saying, "My days are numbered."

Sure enough, within two weeks, Lindsay had deactivated her Instagram to get away from the people bombarding her page with hatred. But it doesn't stop with her Instagram page; even her tweets are full of so-called fans throwing stones at Lindsay for Harrison's break and insinuating that the 35-year-old started all this because she wants his job — despite the fact that Lindsay never called for Harrison to lose his position. Obviously, Lindsay planned everything and told Harrison to say all those things in the interview because she's a criminal mastermind who controls what the almost 50-year-old media-trained professional says.

Rachel Lindsay didn’t get Chris Harrison fired. He did that. It’s unfair how the burden of ABC’s inability to create brand with a culture of inclusion, diversity, and nonracial bias has had to fall on her shoulders. I stand with her. Everything needs to change. Let’s go, Bachelor

Lathan said it perfectly in his Instagram post: "Rachel is not responsible for Chris Harrison, a 49-year-old man who can't read the room in these present 2021 times. She's not responsible for that. It's not her job to make excuses or provide cover for somebody who doesn't understand what the f*ck triggers people in today's world."

"The very notion that the franchise may bow to the desires of people who want something different and possibly make Harrison's exit permanent, motivates people to make grand declarations that they'll stop watching."

But excuses are all those Bachelor fans want. They want Black and nonwhite viewers to get over the fact that Kirkconnell attended an "Old South" themed formal, well-known for being an issue with the Kappa Alpha Order fraternity (which is popular for embracing Confederate General Robert E. Lee as its "spiritual founder"), when she was 21 years old. Even though Kirkconnell continues to ask followers to stop defending her because she takes accountability for her actions, they're outraged that people dared to demand she does so, that she was made to acknowledge her racism. They want Lindsay to excuse Harrison for asking her, a Black woman, who she is to speak on racism, and talking down to her as a guest on her own segment. They want us to excuse the franchise for 40-plus seasons of microaggressions, prejudiced contestants, harmful stereotyping of BIPOC contestants, and an overall enabling of systemic racism.

Because to a predominantly white audience, these are just blips in an otherwise flawless run of seasons. These are rare instances of prejudice that aren't serious because no one is dying, so it isn't that deep. Even if it all adds up to show that the franchise continually disregards the mental health and safety of its BIPOC members. Even if this is another instance in which production didn't do proper vetting to prevent controversy during this historic season seeking to placate concerns about diversity during turbulent times. The very notion that the franchise may bow to the desires of people who want something different and possibly make Harrison's exit permanent motivates people to make grand declarations that they'll stop watching.

This you, @ABCNetwork and @bachnation? 👀

Your words say you “condemn racism, bullying, and hate in all of its forms”—but your actions do not. You remain silent despite the immense racist hate aimed at past and present #TheBachelor franchise cast.#FireChrisHarrison pic.twitter.com/KdYnvSl8IZ

"They don't see the irony in crying that everyone 'playing the race card' is the problem, while attacking the only Black female lead with such viciousness that she deactivates her account."

People have been lamenting a firing that hasn't happened, threatening to "raise absolute hell" if Harrison is removed. They do so while ignoring the accounts of the nonwhite contestants who have experienced racism and prejudice as part of the show and have valid reasons for feeling that Harrison's removal would help the franchise move forward. Instead, they scream into a void that doesn't add to the conversation because they don't respect the idea that their desires aren't the ones that matter at this point. And that is a huge part of the problem. These audience members see Lindsay as the problem, rather than a messenger of the very real problems within the franchise that makes it hard for nonwhite viewers and participants to enjoy it the same way they do. They don't see the irony in crying that everyone "playing the race card" is the problem, while attacking the only Black female lead with such viciousness that she deactivates her account.

I do not doubt that the next step for the franchise is damage control. Tapping Emmanuel Acho to host the "After the Rose" special means they're planning to tackle the controversy head-on — how extensively, remains to be seen. The next step should be a public statement supporting Rachel Lindsay from the production and Harrison — who could show just how committed he is to being actively antiracist by standing up for the woman taking sh*t for his actions. Because Lindsay does not deserve any of the venom aimed her way, and this clusterf*ck has further emphasized how much change needs to be made within the franchise if it will continue. Fans are no longer accepting their entertainment with a side of being slapped in the face by discrimination.