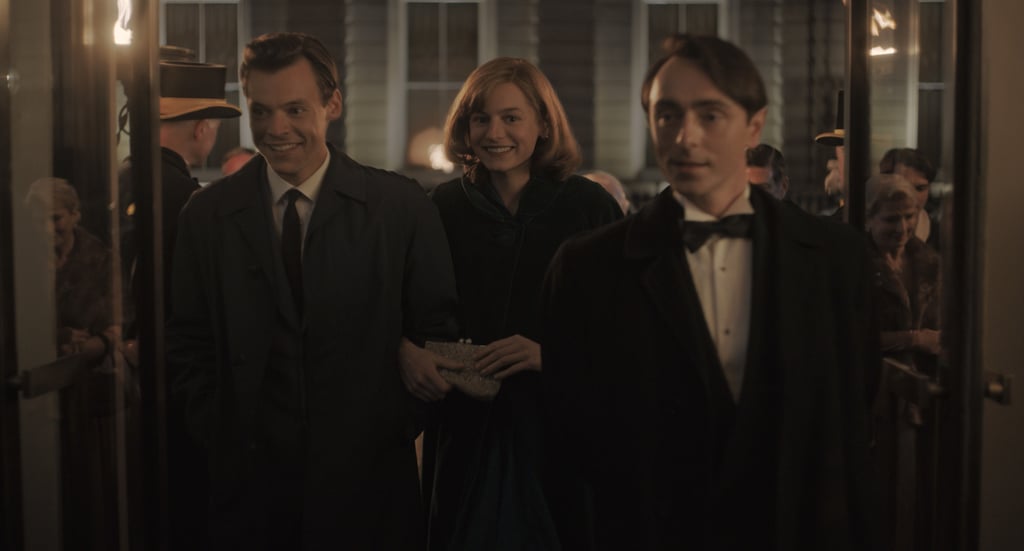 Forbidden love is in the air in the new teaser for Prime Video's "My Policeman." In the short clip, released Oct. 4 to mark one month before the new movie hits the streamer, Harry Styles's Tom and David Dawson's Patrick secretly hold hands in a crowded movie theater. "Bewitched, Bothered, and Bewildered" by Ella Fitzgerald provides the soundtrack for the intimate moment. But when the camera pans back up, Tom has been replaced by Emma Corrin's Marion. It's a tantalizing teaser for the movie's complicated love triangle.

In "My Policeman," Styles's Tom is a closeted gay policeman living in 1957 Brighton. He marries Marion, a school teacher, but falls for Patrick, a museum curator. The three end up in a tangled relationship centered around this secret. At the time the movie takes place, homosexuality is still illegal in England (it remained that way until 1967). Prime released the full trailer for the movie on Sept. 7.

"My Policeman" is directed by Michael Grandage and based on the 2012 novel of the same name by Bethan Roberts. Producer Robbie Rogers spoke to Vanity Fair in June about why he decided to cast Styles. "This story is about two people that are in love with Tom, slightly obsessed with him," he explained. "Harry — the world is so transfixed on him, on his every move."

Granger added that Styles's limited acting experience was ultimately an asset. "Because he hasn't done much, he hasn't developed the ability to work out tricks or even lie. He can only do it truthfully and as he knows it," he said.

"The whole point of Tom is that he is a character who is confused," Granger said of the role later in the interview. "It's made more problematic by the fact that he's a policeman, and he's in a career that is about upholding the law. And the law in the country at the time is about everything he feels — the complexity of it is something that whoever was going to play younger Tom and older Tom needed to somehow understand and absorb."

From its theatrical and streaming release dates to its stacked cast list, here's everything we know about one of the most hotly-anticipated movies of 2022, "My Policeman."