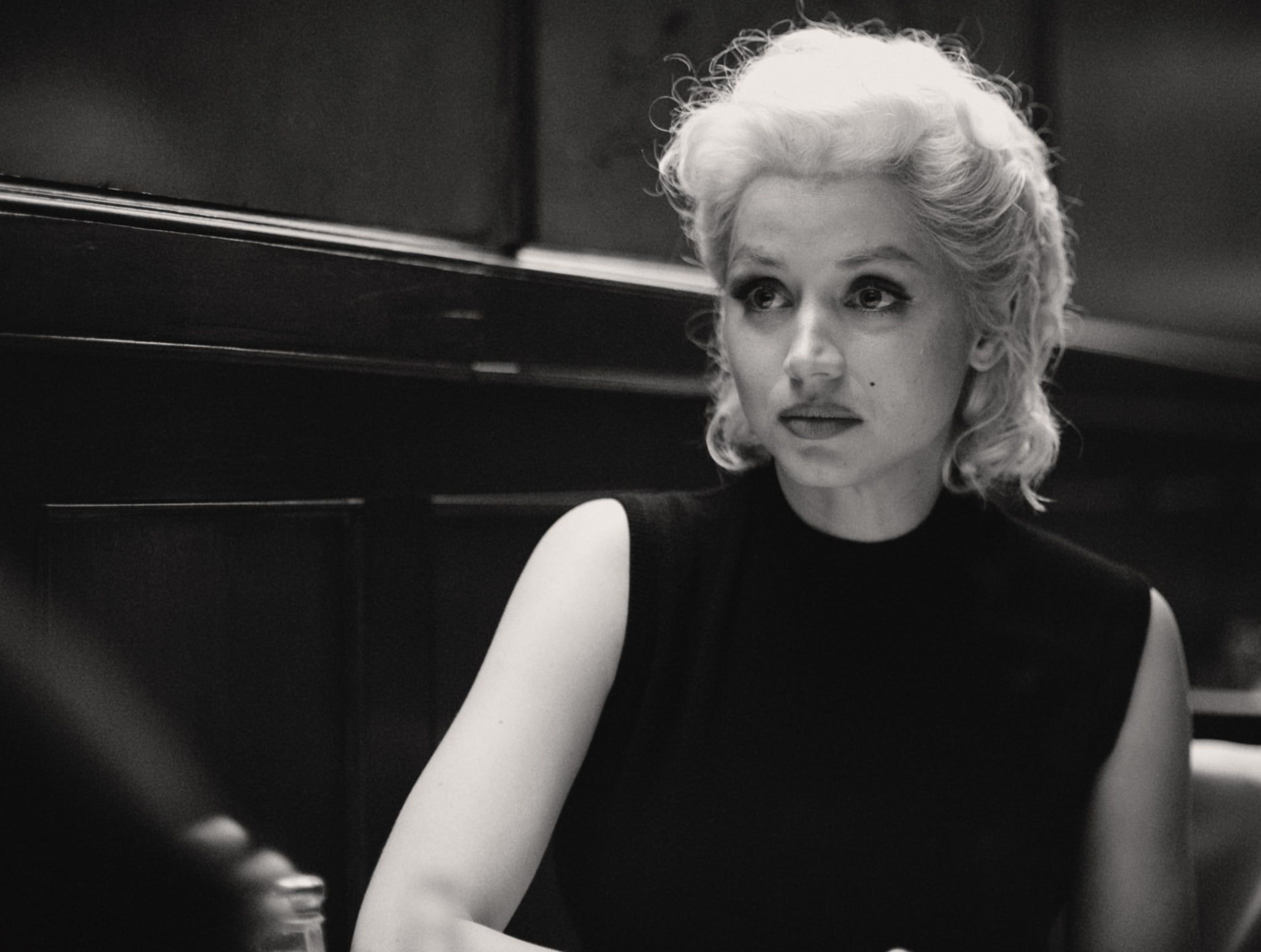 "Blonde," the new movie starring Ana de Armas as Marilyn Monroe, is more inspired by the legendary actor's story than it is a retelling of her life. However, there are parts that stick pretty closely to the facts we know about her.

The film is an adaptation of Joyce Carol Oates's novel of the same name, and director Andrew Dominik told BFI in an interview published Sept. 27 that the decision to adapt the novel is why there are so many factual changes to the story he tells. He explained, "I've read everything there is to read about Marilyn Monroe. I've met people that knew her. I've done an enormous amount of research. But in the end, it's about the book. And adapting the book is really about adapting the feelings that the book gave me. I see the film, in some ways, as Joyce's vision of Marilyn, which is also really Joyce."

He added, "You have to play fast and loose with the truth in order to have a certain narrative drive. But there are a lot of psychological processes that are dramatised in Blonde, a lot of Lacanian and Freudian ideas. For me it was just the scenes I found compelling." Dominik also said that he thinks his portrayal of a "relentlessly unhappy" Monroe is actually pretty factual. "I think her life would have been incredibly unhappy. There are moments of joy and love, but years of unhappiness. If she found joy, she could potentially be alive today. You could be talking to her," he said.

Ahead, we're separating the facts from the fiction in "Blonde," streaming on Netflix on Sept. 28 and in theaters now.

Monroe's father has a mythic presence in "Blonde." She never meets him, but she's obsessed with him and the happy life he represents to her. Monroe begins to get letters from someone claiming to be him only to find out later that they're fake. And Monroe's mother tells her that her father is a big star.

In "Blonde," Monroe calls all her husbands "Daddy," which she did not do in real life.

In real life, Monroe married Dougherty when she was 16 years old. "Blonde" omits this relationship, instead jumping from a young Monroe to her early days in Hollywood.

In "Blonde," one of the only happy periods of Monroe's life is when she's in a throuple relationship with Charles "Cass" Chaplin Jr., the son of Charlie Chaplin, and Edward G. Robinson Jr., whose father was also a famous actor. The trio take part in threesomes together and also share their lives. In real life, the three did know each other, but there's no evidence that they had an intimate relationship.

Monroe and Joe DiMaggio eloped in 1954 in real life. In "Blonde," DiMaggio decides to leave Monroe after she films her iconic subway-grate scene for "The Seven Year Itch." When they film the scene in the movie, hundreds of spectators appear to watch, which did happen in real life. According to The Guardian, photographer George S. Zimbel recalled DiMaggio causing a scene on set because he was so furious. The couple also allegedly got into a fight at the hotel, and Monroe filed for divorce when she returned to California.

Monroe and DiMaggio did become friends again after her divorce from playwright Arthur Miller. He ultimately arranged her funeral service.

In "Blonde," Monroe meets Miller when she's taking an acting workshop. In real life, the pair were actually first introduced by director Elia Kazan. She did, however, move to New York to study acting further at Lee Strasberg's Actors Studio. While she didn't star in any of Miller's plays, he did write a movie for her, 1961's "The Misfits." Monroe also converted to Judaism when she married Miller, though Monroe divorced Miller shortly after filming for "The Misfits" ended.

Monroe's relationship with JFK is the subject of much debate. Of course, she did sing "Happy Birthday" to him in 1962 at Madison Square Garden in her iconic sparkling dress. "Blonde" doesn't choose to dramatize that moment but rather picks a sexual encounter between them in a hotel room that starts consensually and ends with JFK raping her.

Her biographer, James Spada, wrote in his biography "Monroe" that there is evidence that Monroe had an affair not just with the president but also with his brother Robert F. Kennedy.

Monroe's desire to be a mother is a big part of "Blonde" and based on real life. Monroe had endometriosis, which gave her severe menstrual pain. As was documented in Sarah Churchwell's biography "The Many Lives of Marilyn Monroe," she had several pregnancy losses, plus an ectopic pregnancy.

"Blonde" dramatizes one of those pregnancy losses, but it also depicts Monroe undergoing two abortions, one not entirely by choice, and she expresses regret about them. There are rumors that Monroe had multiple abortions, but there's no concrete evidence of them or her feelings about them if they did occur.

Marilyn Monroe's Use of Drugs and Death

Monroe did use and abuse pharmaceuticals. It made life on set hard for her, and as "Blonde" shows, the filming of 1959's "Some Like It Hot" was particularly challenging. Billy Wilder, Jack Lemmon, and Tony Curtis all complained about her behavior on set. Monroe died on Aug. 4, 1962, of acute barbiturate poisoning — an overdose — in her home. She was 36 years old.

Movies
Believe It or Not, "Cocaine Bear" Is Loosely Based on Real-Life Events
by Alicia Geigel 17 hours ago

Movies
35 of the Most Anticipated Movies of 2023, From "The Little Mermaid" to "Dune: Part II"
by Victoria Edel 17 hours ago