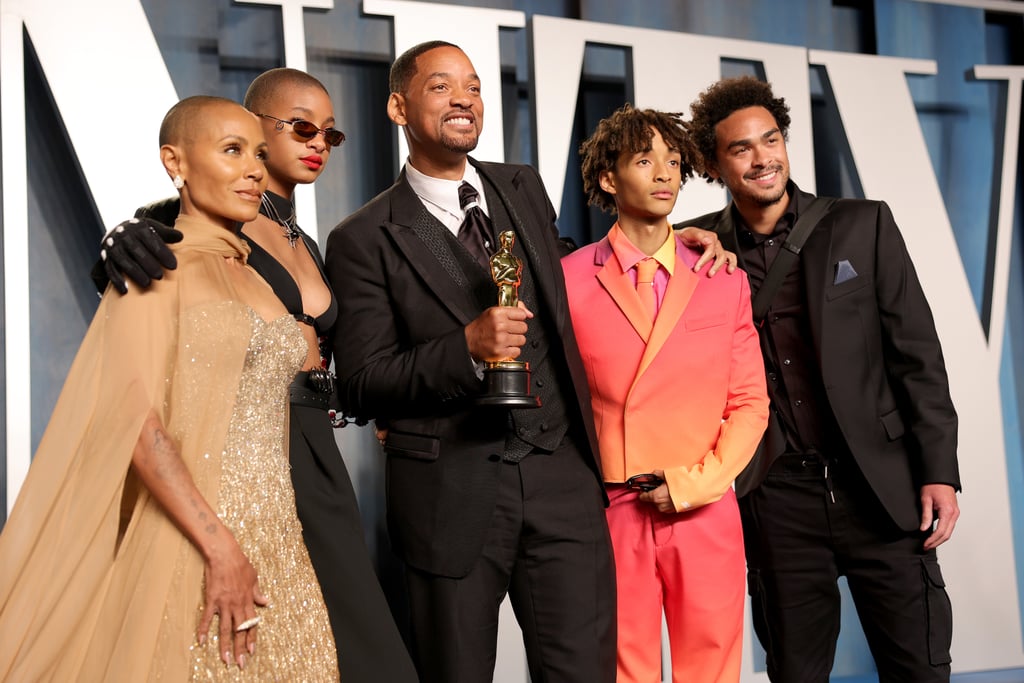 Will Smith Celebrated His Oscar Win Surrounded by Family

Will Smith certainly made the 2022 Oscars a night to remember, but even after his altercation with Chris Rock, the "King Richard" actor was all smiles while celebrating his best actor win. Smith's wife, Jada Pinkett Smith, and their children, Jaden, Willow, and Trey, all posed on the Vanity Fair Oscar Party red carpet Sunday night following his tearful acceptance speech. Smith's win for his leading role makes him the fifth Black man in history to snag an Oscar for best actor — along with Denzel Washington, Sidney Poitier, Jamie Foxx, and Forest Whitaker.

In his acceptance speech, Smith addressed his emotional encounter with Rock (though he never mentioned the comedian's name) and apologized to the Academy and the Oscar nominees. In regards to his actions, Smith compared himself to Richard Williams — whom he portrays in "King Richard" — noting that he's a "fierce defender of his family." "In this time in my life, in this moment, I am overwhelmed by what God is calling on me to do and be in this world," he added. "I am being called on in my life to love people. And to protect people. And to be a river to my people."

The actor also acknowledged how major his win is, not only for him, but for everyone involved in the film. "I am not crying for winning an award. It's not about winning, it's about being able to shine a light on all of the people. Tim [White] and Trevor [White] and Zach [Baylin] and Saniyya [Sidney] and Demi [Singleton] and Aunjanue [Ellis] and the entire cast and crew of 'King Richard,' Venus and Serena, the entire Williams family. Art imitates life. I look like the crazy father, just like they said about Richard Williams. But love will make you do crazy things."

Following the Oscars, Smith continued his family celebration inside Vanity Fair's afterparty, where he was spotted dancing with his award and enjoying himself among his peers. Despite the bittersweet moment, it seems Smith was still able to make the most of his big night. Ahead, check out more photos of Smith and his family's sweet red carpet appearance.