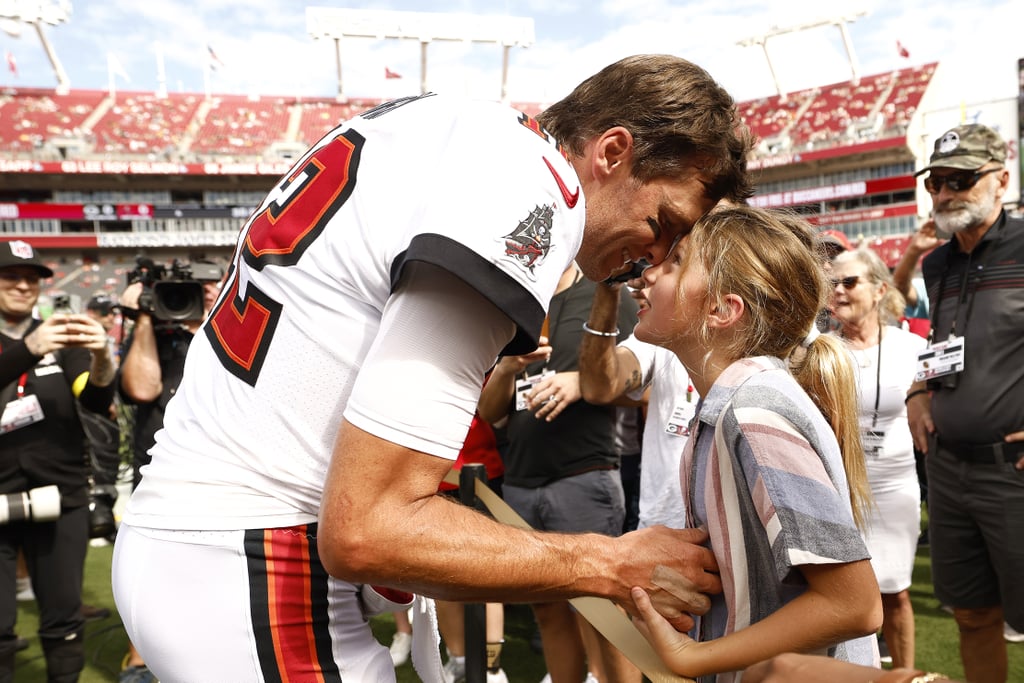 Tom Brady and his Tampa Bay Buccaneers team may not have walked away with the victory against the Green Bay Packers on Sunday, but the 45-year-old quarterback still got to spend some quality time with his family. On Sept. 25, during Brady's first NFL home game of the season, the father of three was photographed sharing some cute moments with his 9-year-old daughter, Vivian, and 15-year-old son, John, aka Jack, on the sidelines at the Raymond James Stadium. A video posted on Twitter also showed Brady hugging his children and giving his daughter a sweet kiss on the forehead as they wished him good luck.

Though Brady's wife, Gisele Bündchen, wasn't in attendance, she's been seemingly supportive following her husband's brief retirement that was announced back in February. On Sept. 11, she tweeted, "Let's go @TomBrady! Let's go Bucs ! ✨✨✨," after missing his first post-retirement game against the Dallas Cowboys. Bündchen's absence from Brady's recent games comes amid reports of marriage trouble between her and Brady.

"Everyone here knows that there's tension, but we don't know how serious it is," one insider told People earlier this month. "So we're just not talking to him about Gisele. It's not a topic anyone wants to bring up to him." Despite Bündchen's recent tweet of support, a separate source told the outlet that she wasn't exactly excited about Brady coming out of retirement. "She was so happy when he announced his retirement, and she wasn't thrilled at all when he went back on that."

Alleged relationship troubles aside, Brady is still making time to handle his fatherly duties. According to People, the football star took some time out last week to attend his son's own game in New York, as well as earlier this month to watch one of his practices. "Tom was in great spirits and chatted to all the parents," a source said. "He flew all the way in for the scrimmage. He's such a sweet dad and always there for Jack."

See pictures of Brady and his kids at the Buccaneers' home opener ahead.

Celebrity Instagrams
Britney Spears Celebrates Her Birthday by Posting a Tribute to Her Sister, Jamie Lynn Spears
by Sabienna Bowman 5 days ago