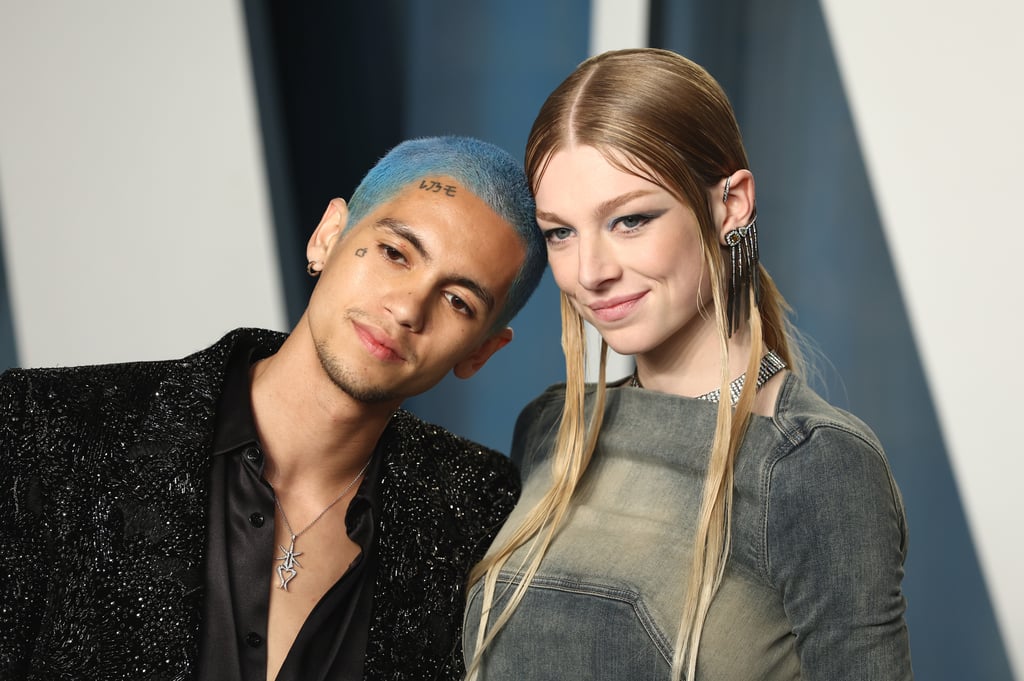 Hunter Schafer and Dominic Fike just celebrated a big relationship milestone: they made their red carpet debut as a couple. The "Euphoria" costars and real-life lovebirds attended Vanity Fair's Oscars party on March 27 and posed together before heading into the star-studded event in Beverly Hills. Fike had one hand positioned on Schafer's hip the entire time, and they exchanged a few loving looks and laughs as the cameras snapped away. Both stars dressed to impress for their big night out — Fike wore an all-black Saint Laurent suit featuring a sparkly jacket, while Schafer chose a long-sleeved denim Rick Owens gown and De Beers jewelry. Fike's blue buzz cut also subtly matched his girlfriend's eyeshadow.

The Vanity Fair party basically turned into one big "Euphoria" reunion. After walking the red carpet, Schafer and Fike linked up with costars Zendaya, Maude Apatow, Barbie Ferreira, Sydney Sweeney, Angus Cloud, and Colman Domingo, who were also in attendance. The gang was all there, and we have to wonder whether Fike busted out an impromptu performance of Elliot's infamous "Little Star" song from the HBO show's finale.

Fike and Schafer have been romantically linked since January, when they stepped out for two dinner dates in West Hollywood. They seemingly confirmed dating speculation when Fike shared a photo on his Instagram Story of him kissing Schafer while celebrating her birthday in early March. They weren't the only couple to make their love red carpet official following this year's Oscars — Lori Harvey and Michael B. Jordan also walked the red carpet together for the first time, along with Anya Taylor-Joy and Malcolm McRae.

Read ahead to admire all the snaps of Fike and Schafer turning Vanity Fair's Oscars celebration into a date night.