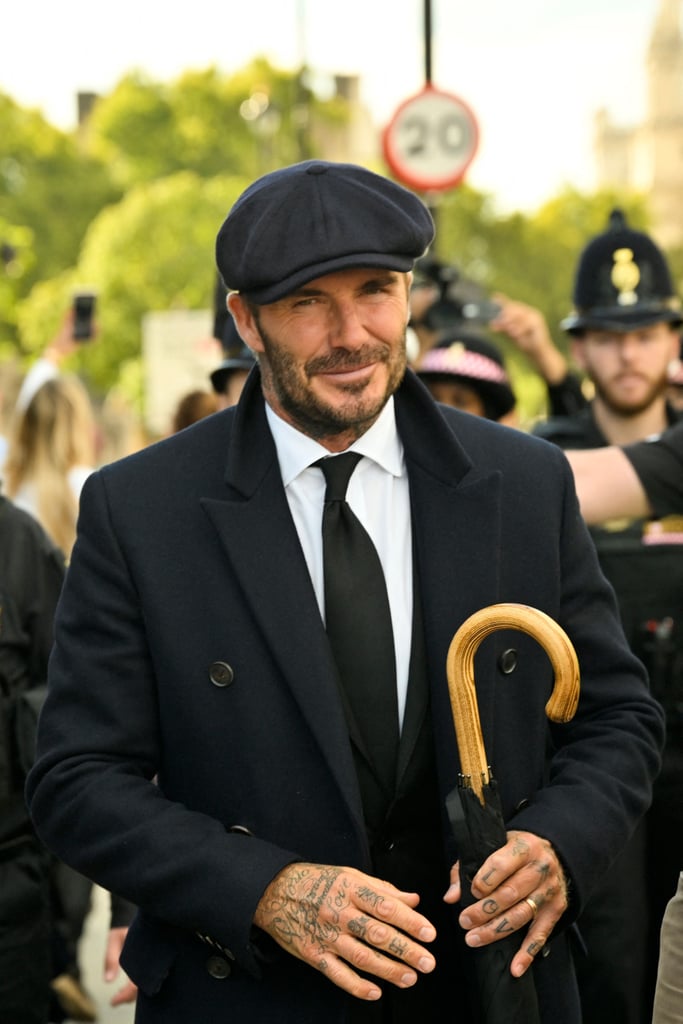 On Friday, soccer legend David Beckham queued with thousands of mourners outside Westminster Hall for more than 12 hours as he waited to pay his respects to Queen Elizabeth II. The queen is lying in state inside Westminster Hall until her funeral on Monday. For now, people around the world — including famous faces like Beckham — are taking this time to honor the only monarch most of them have ever known.

For Beckham, waiting in line was both a way to "celebrate the amazing life" of the queen and to act as a stand-in for his late grandparents, who he told reporters would have been there if they were alive. According to the 47-year-old, he comes from a family of royalists. "I know that they would have wanted to be here, so I'm here on their behalf, and on behalf of my family," he told ITV News.

In a video posted by BBC reporter Vicki Young on Twitter, Beckham shared what it was like to wait side by side with so many other mourners throughout the day. "We've all been celebrating and telling stories," he said. "We're all going through this . . . To be honest, it's what we all envisioned. We all want to be here together. We all want to experience something where we celebrate the amazing life of our queen, and I think something like this today is meant to be shared together. The fact that we've been here, we're eating Pringles, we're eating sherbet lemons, we're eating sandwiches, having coffee, doughnuts."

Beckham also revealed he joined the queue around 2 a.m. thinking he would miss the crowds. However, ultimately everyone else had the same idea. Seeing the athlete stand with the crowd made an impact on those around him. One mourner told the BBC that they had nothing but respect for Beckham after standing with him all day. "He's stood with us, and he's paid his respects how he wants to, and I think that's amazing," they said.

In addition to waiting in line to pay his respects, Beckham — who previously met the queen on more than one occasion — penned a tribute to the monarch on Sept. 8, the day she died. "I'm truly saddened by the death of Her Majesty, The Queen," he wrote on Instagram alongside photos of the queen. "What an outpouring of love and respect we saw for the Platinum Jubilee for her life of service. How devastated we all feel today shows what she has meant to people in this country and around the world. How much she inspired us with her leadership. How she comforted us when times were tough. Until her last days she served her country with dignity and grace. This year she would have known how loved she was. My thoughts and prayers are with our Royal Family…"

See the gallery for photos from Beckham's time waiting in line to honor Queen Elizabeth.

Keke Palmer
Keke Palmer Reveals the Best Sex Advice She Ever Received: "Start With Pleasing Yourself"
by Chanel Vargas 5 days ago

Celebrity News
Melanie Martin Honors Aaron Carter on Son's First Birthday: "Going to Be a Tough One"
by Chanel Vargas 5 days ago