If you think back to your first beauty memory, chances are high that it was copying your mom or older sister as she did her makeup, or applying a DIY treatment concocted by your grandma. If you're Asian, chances are even higher that the remedy included a pungent combination of eucalyptus oil, menthol, and peppermint oil that we cannot smell to this day without immediately thinking of childhood. For beauty content creator Christie X., it's the memory of watching her mom and grandma go about their daily beauty routines, edgy and colorful makeup for the former and staunch skin care for the latter.

To this day, Christie still cites her mom and grandma as her biggest inspirations. "Because of them, I know how to tackle beauty, not just in makeup, but long-term skin care as well," she notes. In fact, many of the hacks and techniques she uses and shares with her community on TikTok and Instagram have come from the generations before her — hacks born from growing up in a low-income Asian household. Christie might not always have appreciated them, but now, as an adult, she sees them for what they are: valuable tips that encourage resourcefulness and creativity — and her hundreds of thousands of followers agree. "So many younger girls are going through exactly where I used to be, and they love these makeup hacks."

Ahead, she chats about the evolution of her relationship with beauty: tips she's picked up from her elders, learning to love highlighting her inherited features rather than hiding them, and how she went from buying $1 mascaras from the deli to now shopping her favorite brands at Ulta Beauty founded by Asian Americans and Pacific Islanders. 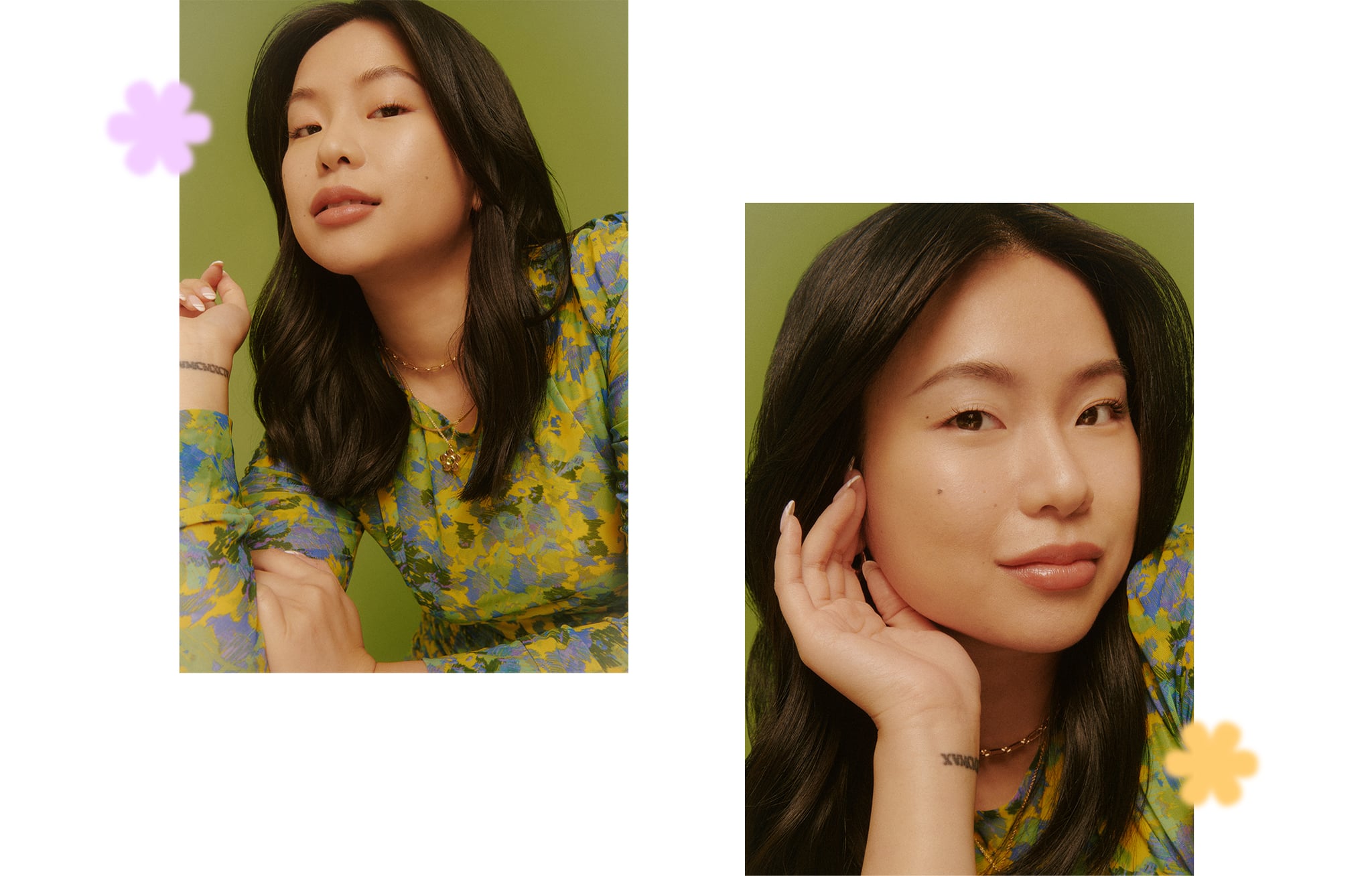 Most first- and second-generation Asian Americans would argue that no matter how you grew up, being resourceful is a trait that's ingrained in you from a young age. It's not a "saving money" thing, it's simply a cultural thing, passed down from older immigrant generations. So much of Christie's own approach to beauty ties into this resourcefulness.

"I was born in Hong Kong and came to the US when I was 11," she shares. "I grew up in a low-income family, which always reminds me to save money and never splurge. I was taught to maximize the usage of what I have." And that included, of course, beauty products. "When I first started doing makeup, I didn't have the luxury of buying high-end makeup. I still remember the first makeup item I ever got from a deli, which was a $1 mascara. I used the mascara on my lashes; then, because I didn't have extra money for an eyeliner, I used a toothpick to apply the mascara formula as my eyeliner as well. Of course, now I have a full-time job and I'm able to splurge on myself sometimes, but I think the 'boujee on a budget' mindset is what appeals to my audience."

Another multifunctional hack Christie loves is using the same product on both her cheeks and lips or her face and eyes. "If you only have one blush, you can use it as your lipstick, too — this will unify your look and also save you money," she shares. "Or vice versa — my grandma has also used lipsticks as blush before, too. I started doing it with my cream blushes and it went viral on TikTok. I also always use my contour stick on my eyes as a natural eyeshadow." These days, Christie loves using the Han Skincare Cosmetics Multistick in Toasted Nutmeg — a product created specifically for multifunctionality. "I love using this multistick on lips and cheeks, and sometimes even on my eyes for a quick look when I don't want to use eyeshadow. Putting color on those three areas creates a very nice sun-kissed effect."

Oh, and that particular mascara hack? She's since perfected it, now often using colored mascara (a preference she picked up from her mom) on both her lashes and as an eyeliner, with one notable difference: "Just make sure it's waterproof!" 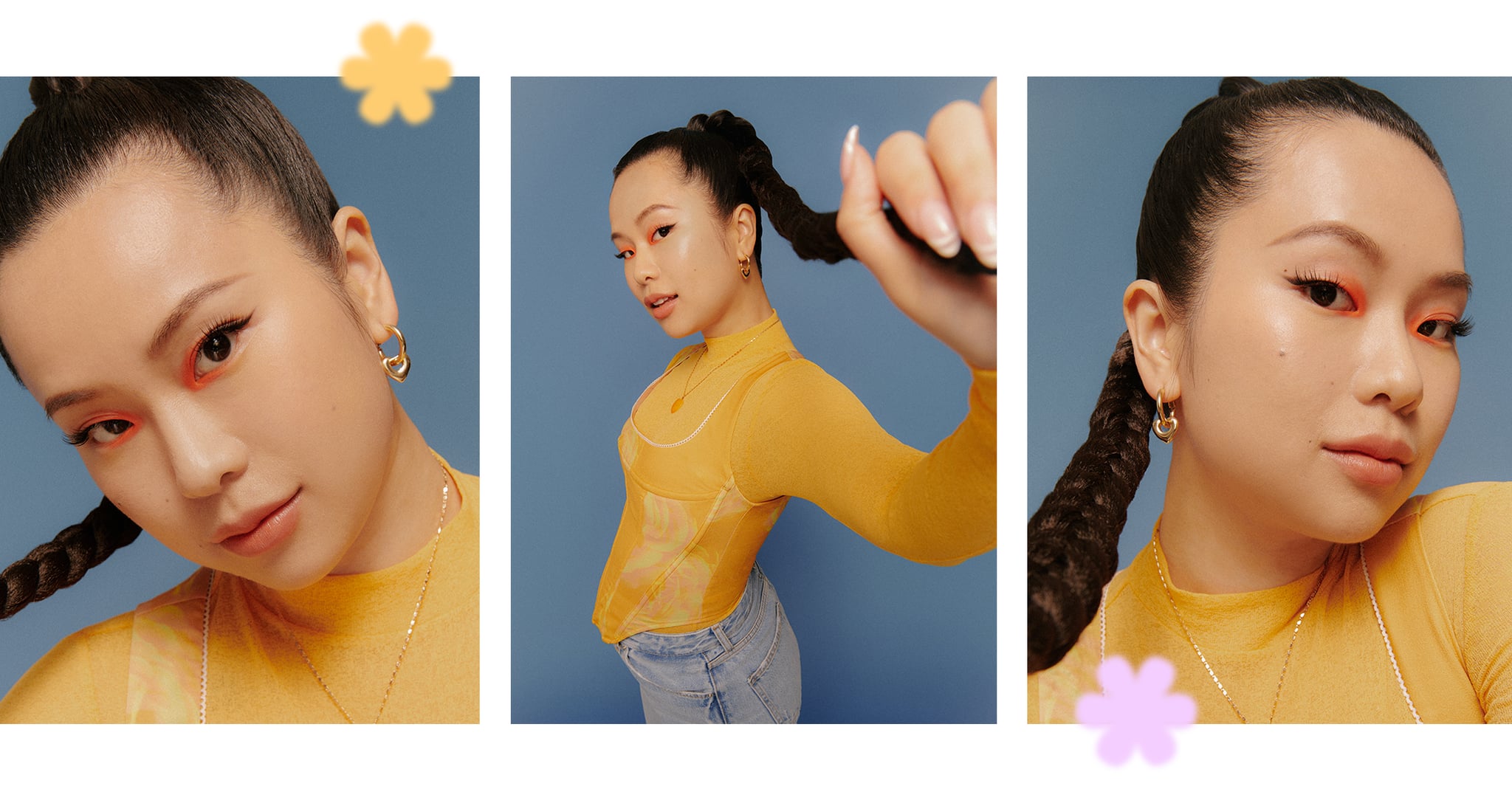 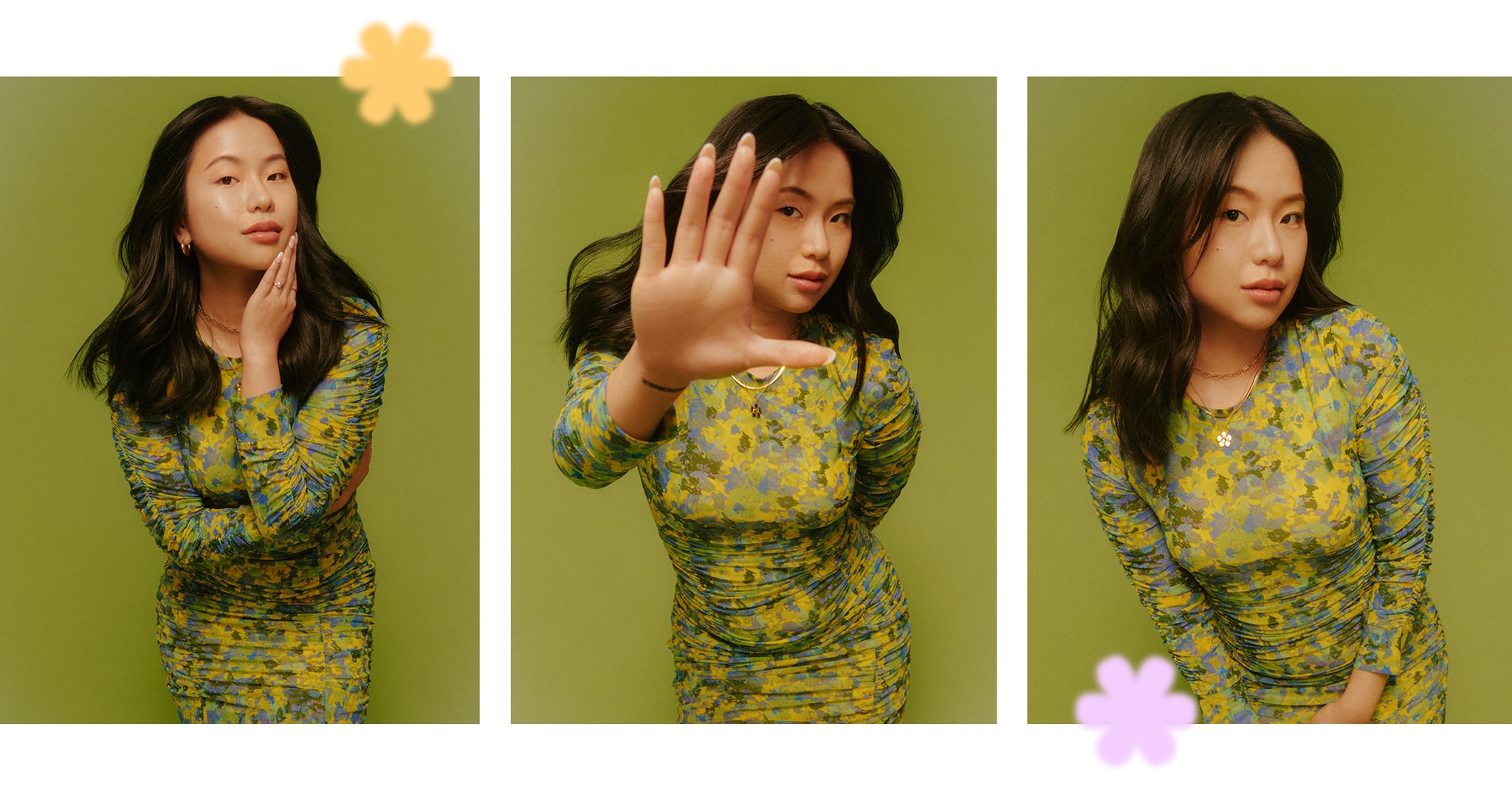 Everything she knows about skin care, Christie learned from her grandma. "My grandma is a skin-care-based, natural-beauty kind of person and is always teaching me to preserve my youth," she shares. "She taught me skin care is more important than makeup because without nice, prepped skin, your makeup will never look as good. Now, I religiously follow a good skin-care routine because, like my grandma says, makeup won't be there forever, but your skin will."

Christie's daily regimen consists of a few tried and true favorites from AAPI-founded brands at Ulta Beauty, starting with Peach & Lily. "I like to use Peach & Lily to prep my skin before makeup," she says, noting the Peach & Lily Glass Skin Discovery Kit as her go-to. "The entire brand is about glass skin, which gives you that natural glow-from-within look."

At night after cleansing, Christie will follow up with the Hero Cosmetics Lightning Wand Dark Spot Brightening Serum. "I have a lot of acne scarring, and I use this before I go to bed and roll it over my acne scars. It has vitamin C, which helps to naturally lighten." Next is the Blume Meltdown Acne Oil, which Christie uses as the last step in her routine to slug — another tip her grandma taught her. Slugging acts as an occlusive, forming a protective layer over the rest of her skin-care routine for baby-soft skin.

No matter what product she's using, the key is in the application. "One thing my grandma always tells me is to pinch your cheeks and massage while doing your skin care — this will result in more blood flow and circulation. And, not gonna lie, she is almost 85 years old and still has the most apple-red cheek flush!" 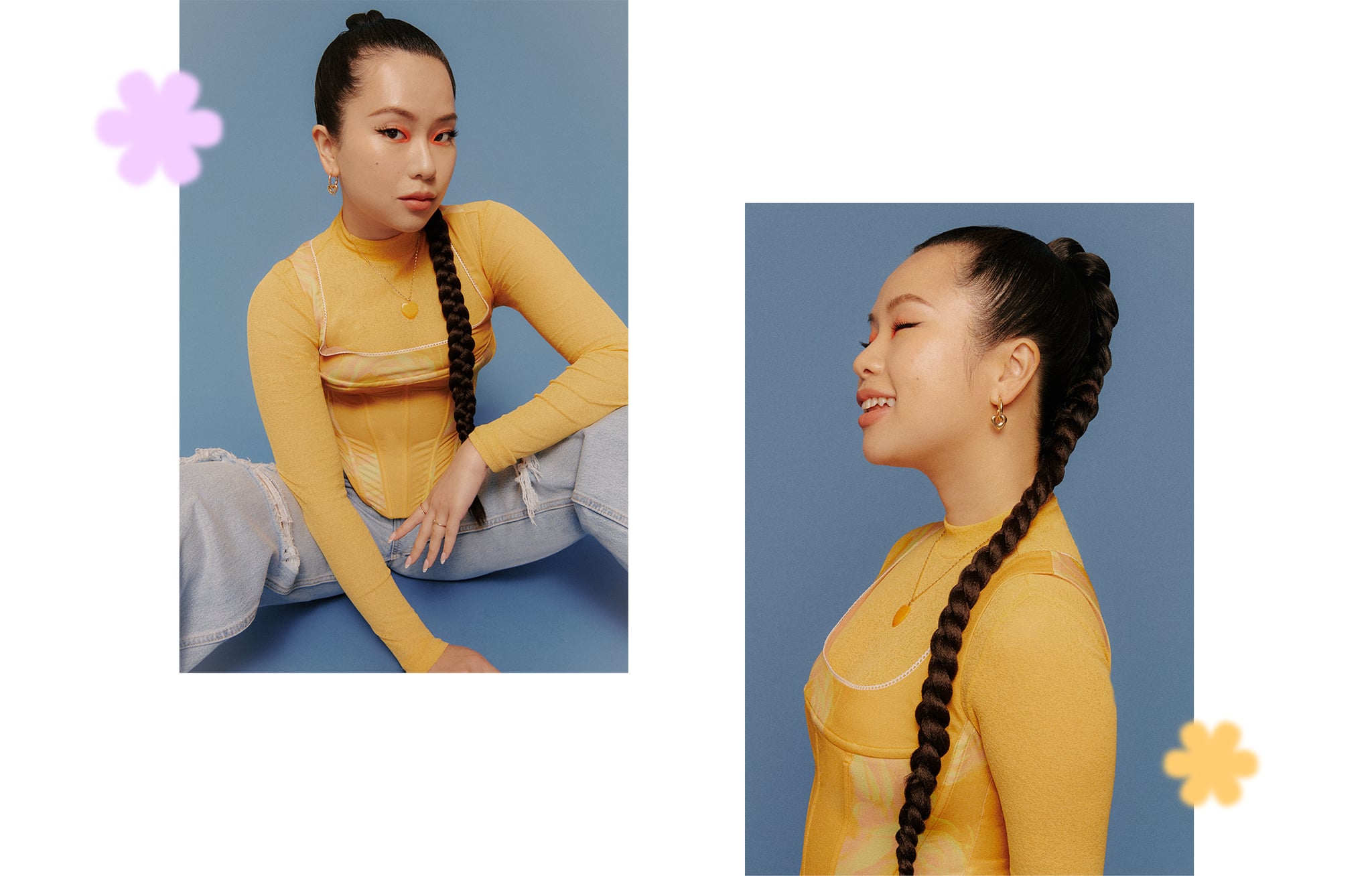 On Learning to Love Herself

For many people of color, learning to love our inherited features is a journey — one that Christie herself has traveled. "When I was in high school, I was bullied a lot for my race and my look, and I hated how small my eyes are," Christie says. "I also hated my acne-prone skin, so I used to always hide it with a heavy foundation, which caused my skin to break out even more. Thinking back, I think that was all so silly, but at the time I didn't have any friends." Instead, Christie found comfort in the Asian beauty YouTube community with the likes of Michelle Phan and Lindy Tsang of Bubzbeauty, whose videos she would watch every day after school to learn makeup tips.

Christie specifically remembers 2017, when full-out glamour was the norm for her (and many others), with matte foundation, extreme contouring, and cut-crease makeup. "It took me years of 'blending in' with the way I do my makeup to realize it's about time to ditch those dramatic fluffy lashes, those cut-crease eyeshadows that completely altered my natural features, and focus on my own natural beauty. I started appreciating my almond eye shape and complementing it with my makeup instead. I ditched the matte full-coverage foundation and started loving my own acne-prone skin. I let the pimple shine or sometimes just dot an eyeliner on it and make it a cute beauty mark. Makeup should be enhancing your own beauty, not concealing it."

These days, Christie may be comfortable in her own skin, but she knows many others don't feel the same. Looking back, she's grateful to the Asian beauty community for providing people for her to look up to, and she hopes she can be that person to someone else. In fact, she often refers to herself as a "big sister" on TikTok: "I don't want to be a guru, I don't want to be an influencer, I want to be a bigger sister — I wish I could have been my own big sister and told myself to love myself before wishing others to love and appreciate me." 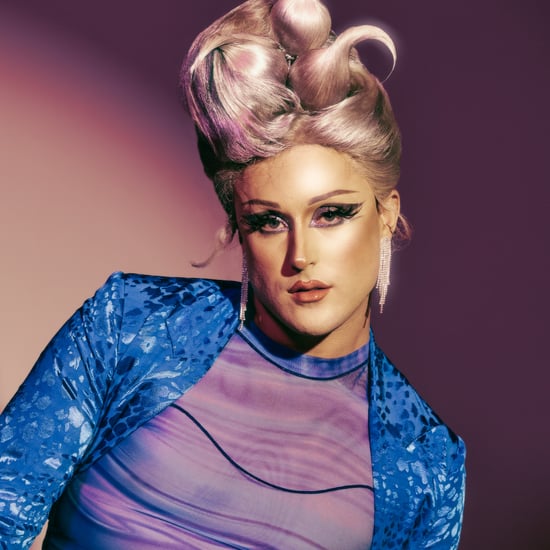 Celebrity Makeup
Meet Chase Runaway, the Drag Queen Building a Dream on Possibilities and Primer
by Samantha Sasso
paid for by Ulta Beauty
6/02 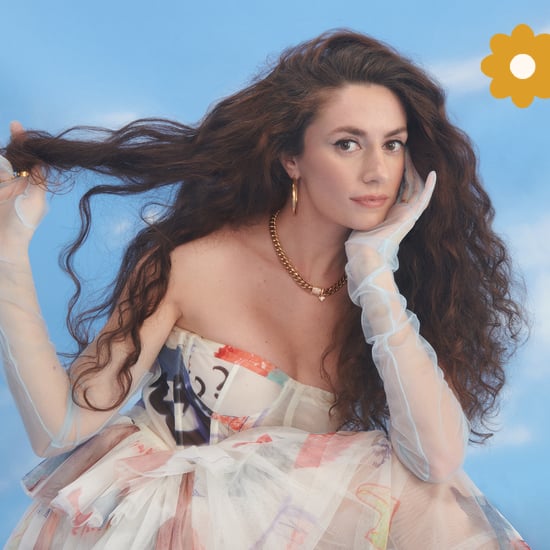