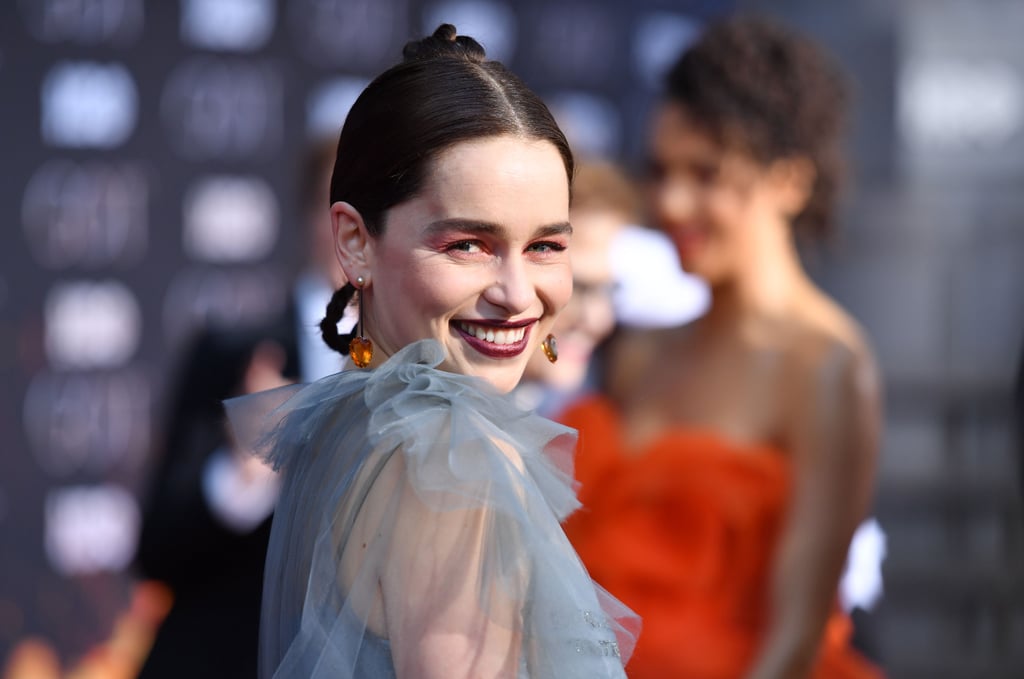 The Game of Thrones cast traveled all the way from Westeros to New York City for the HBO show's final red carpet season premiere on Wednesday, and it's safe to say they put their best faces forward for the occasion. Take Emilia Clarke, for example. The 32-year-old actress turned heads in a tulle Valentino gown with a sneaky hidden message on it, but her hair and makeup are what really caught our eye as she headed into Radio City Music Hall to watch season eight's first episode.

Celebrity hairstylist Jenny Cho styled Clarke's dark hair into a braided updo inspired by her Game of Thrones character, Daenerys Targaryen. Cho slicked back her middle-parted hair and gave her a braid that trailed down the back of her head before making a loop at the nape of her neck. We're bending the knee at her hair skills!

Clarke's makeup was just as stunning, featuring fiery red-orange eye shadow and bold deep maroon lipstick, all done by Chanel makeup artist Kate Lee. Read on to take an up-close look at Clarke's Khaleesi-approved braid and makeup, and then, if you're still in the mood for more beauty magic, get the full breakdown on Maisie Williams's beauty look at the premiere.

Related:
The Urban Decay x Game of Thrones Collection Sold Out — Here's How You Can Get It
Previous Next Start Slideshow
Game Of ThronesEmilia ClarkeBeauty NewsCelebrity HairBraidsCelebrity BeautyHairUpdos

Beauty News
Harry Styles Sent Lizzo His New Beauty Products, So Naturally, She Made an Unboxing Video
by Victoria Messina 6 days ago

Taylor Swift
We Know Her Missing Scarf Is Red, but What Is Taylor Swift's Natural Hair Color?
by Brittany Sims 6 days ago